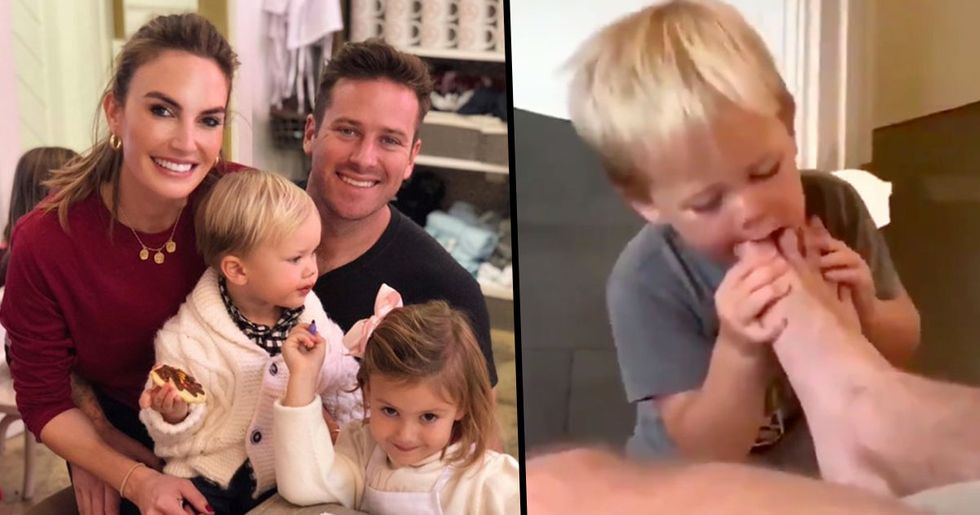 Kids do the darndest things. When you aren't catching them with their hands in the peanut butter jar, they're peeling your mom's marigold wallpaper straight off the wall. You gotta love them though, right? And it always makes for such good content! Saying that though, being a parent in the age of instant video sharing can be both a comfort and a curse.

It's reassuring to know that Jeff from work also spent the morning deconstructing a lego fortress- and by morning I mean half five in the morning, morning. "Morning Jeff", "Morning Kev" - they message each other over Instagram, comparing videos of their squealing three-year-olds. "Has little Micky built a spaceship?" "What no, can't you tell? That my friend is a radioactive fairy-goblin." "Nice we're making knee-high boots...and igloos."

However, with instant sharing comes instant judgment. Out of context clips can be confusing and easily misconstrued. Anyone with young kids will know how weird they can be. Filming these little weirdos can be comedy gold for the whole extended family to laugh at. To anyone outside of the familiar circle though, these clips might just seem strange.

Actor Armie Hammer faced criticism this week for posting a video on Instagram of his young son sucking his toe. Alright, now don't think that I don't think it's gross either but eh, let the guy be. Spending time with little kids all day can make you go a bit doolally and he probably just wasn't thinking when he posted it.

The internet is no place for sympathy though, and Twitter has blown up since the video hit the 'gram. Armie Hammer was trending for some time yesterday and although he stayed quiet on the subject, his wife, TV Host Elizabeth Chambers has spoken out.

Armie Hammer posts a reasonable amount of pictures of his brood.

Armie and his wife Elizabeth have two children together, Harper Grace Hammer, who's four-years-old and Ford Armand Douglas Hammer, who's two. I wouldn't say he posts loads of pics of his little ones. His Insta is mostly full of him, places he's been, business stuff and promoting movies.

Elizabeth Chambers posts a lot of kid pics on her Insta.

Clearly a proud mama, Elizabeth Chambers posts a fair few pics of her sweet angels online. Her Instagram is definitely more of a personal page, documenting the family's day-to-day. Of course, when you have young kids, they are an intrinsic part of your day... your hours... your minutes... basically every waking second. And did I say part? I meant a starring role.

I guess Elizabeth is fairly careful as to what she posts...

More careful than her husband, Elizabeth clearly thinks about what pictures are internet acceptable. The images she shares of her two munchkins are always sweet and inoffensive. Maybe Armie didn't get the memo?

Armie Hammer has had his fair share of criticism in the past.

In Call Me By Your Name, Hammer played Oliver, a doctoral student who falls in love with teen heartthrob and art-house cinema golden boy Timothee Chalamet while holidaying in Italy. The movie, based on a book of the same name was a roaring success and was perhaps Hammers' most acclaimed role to date. That didn't stop shade being thrown in Hammers' direction. Privileged, white and male, some people really can't take to this guy. One article that was written for Buzzfeed, after CMBYN, titled "Ten Long Years of Trying to Make Armie Hammer Happen" proves just that.

Armie Hammer didn't just sit back and take the criticism.

@BuzzFeedNews @annehelen Your chronology is spot on but your perspective is bitter AF. Maybe I’m just a guy who lov… https://t.co/fCD3fY9DqU
— Armie Hammer (@Armie Hammer)1511731802.0

In response to the Buzzfeed article, Hammer took to Twitter and said:

"Your chronology is spot on but your perspective is bitter AF. Maybe I’m just a guy who loves his job and refuses to do anything but what he loves to do...?"

@armiehammer @BuzzFeedNews @annehelen ...in a system that has given you the privilege to refuse to walk away becaus… https://t.co/FUdUsVR8NG
— melissa (@melissa)1511742325.0

If anything, by speaking out against the Buzzfeed article, Hammer opened the floodgates to more criticism.

There were plenty of people defending him too.

@armiehammer @BuzzFeedNews @annehelen When I worked with you on Veronica Mars we all thought you were amazing. Sti… https://t.co/BdyZCEyfet
— Michael Perez (@Michael Perez)1511733555.0

It seems as though anyone that knows Armie thinks he's a pretty good guy.

Although this criticism was really an attack on white man privilege...

...it didn't hit the mark with most Twitter users, who consider Hammer one of the good ones.

After posting a video of his son sucking on his toe [see below] Twitter bombarded Armie with criticism. Not only did people think the clip was gross but they considered it bad parenting to allow the kid to suck his toe.

Armie Hammer is trending because of this video of his young son sucking his toes. And the actor shared it on Instag… https://t.co/zkV0Fpdcge
— Perez (@Perez)1564281189.0

Armie originally posted the video on his Instagram story with the caption,

"This happened for a solid seven minutes"

But what I think really riled people up was the additional hashtag he put:

Plenty of people were alarmed by the "7 minutes" comment.

Armie's suggestion that he let his two-year-old son suck on his toes for seven minutes was pretty weird.

Describing it as a "foot fetish" probably wasn't the smartest move.

Many Twitter users were disgusted by the sexualized language used by Hammer.

The trouble with Hammer using a hashtag to say "foot fetish" is that the image then automatically groups into other photos in that category. Meaning that anyone searching for foot fetish material on the gram would find that video of his son. That is pretty gross. Although I'm not sure that's the case with Insta stories, it might just be posts. At least with a story, it's only up for 24 hours, I guess.

A lot of people were considering the future...

@ThePerezHilton It's a very innocent video of a child playing. The only problem I have with it is that he posted it… https://t.co/WmVAoszCUx
— Linn (@Linn)1564294695.0

Many Twitter users expressed concern as to what could happen to the future now that it's online and raised sympathies to Armie's son who had no control over the video of himself being posted.

@ThePerezHilton I had a friends son that did this to me when I was sitting at the kitchen table, his mom said he do… https://t.co/YAsNBYnCCe
— Mustang Momma (@Mustang Momma)1564314867.0

Not everyone thought Armie's post was disgusting. Parents like MustangMumma sympathized with the actor and expressed exploring in this way was just normal kid behavior.

Generally, though, people felt like Armie shouldn't have posted it in the first place.

Even the people that thought kids doing weird stuff like sucking their dad's toes was just classic kid behaviour didn't think it was okay adult behaviour to post it online.

With Armie Hammer remaining silent on the matter...

His supportive wife, Elizabeth Chambers Hammer stepped up to the mic to defend her husband's careless action.

Elizabeth claimed the video was made for a private family stream.

She explained, on a post left on Perez's Instagram post regarding the video that it had been an "ongoing joke" in the family. She also tried to put the record straight, explaining it did not happen for seven minutes, saying it was "more like five seconds."

Some people had guessed "7 minutes" was an exaggeration- intended for comic effect.

But you know what people are like... even though Elizabeth has attempted to explain the situation, I'm sure there'll still be plenty of people that won't want to change their perspective on the story.

For now, I expect Armie has probably had his social media privileges revoked.

And if he wants to keep hold of his "world's okayest dad" mug, he should probably refrain from putting awkward and embarrassing videos of his kids out into the public domain. I'm confident after this week's debacle he'll probably do just that. We live and we learn, right Armie?