Arnold Schwarzenegger Gets Greta Thunberg an Electric Car to Drive Through Canada and U.S. | 22 Words 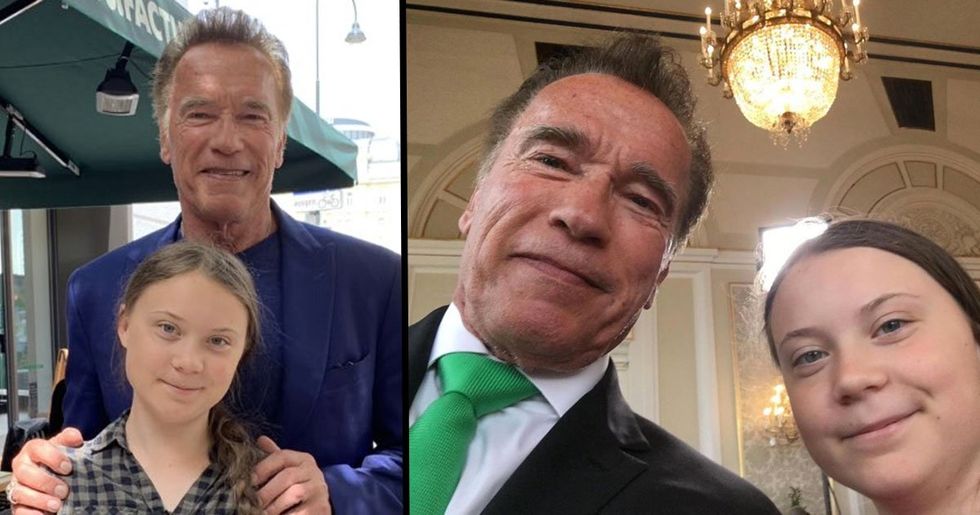 Arnold Schwarzenegger Gets Greta Thunberg an Electric Car to Drive Through Canada and U.S.

This week, Thunberg has taken down all her haters in an incredible Twitter thread. And now, an unlikely face has stepped into the debate - with a pretty out-there offer.

@GretaThunberg You stand more for the ideals of America than nearly every member of this administration and nearly everyone at Fox News.
— Matthew Dowd (@Matthew Dowd)1569441122.0

What's odd is that what Thunberg is saying shouldn't really be controversial at all.

And although Trump clearly isn't her biggest fan ...

There is one (ex) politician who has spoken out in support of Thunberg.

Arnold Schwarzenegger has offered his support for Thunberg.

Speaking on Scandinavian talk show "Skavlan," Thunberg revealed that Schwarzenegger had a generous offer for the teenage activist.

"Arnold Schwarzenegger has offered me to lend his electric car if I want to," she revealed.

And although it may come to help her out one day, even Thunberg admits it was strange, calling it "one of the funniest offers I've ever received."

This isn't the first time the two have crossed paths.

In May, Schwarzenegger shared a picture with Thunberg, calling himself "starstruck." We wonder if she felt the same!

Either way, it's got to feel nice for Thunberg.

In a world of hate and trolling, having these big names speak out in support can only help strengthen her resolve.

At first, Schwarzenegger was offering his own car.

He's long been a proponent of the more environmentally friendly electric car, and has even spoken at events about his Kreisel Electric modified H1, even calling it "his favorite car to drive."

But it was going to be too difficult to get the car from the west to east coast.

So, instead, Schwarzenegger has offered to splash out on a brand new car for Thunberg: the Tesla model 3.

Schwarzenegger has also offered Thunberg support of a different kind, saying she can call him any time for anything she needs.

This means Thunberg can continue her tour with less environmental impact.

A spokesperson for the star had claimed Thunberg now "can travel fully electric through the United States and Canada."

And it seems Schwarzenegger is in good company.

Many famous faces have spoken out in support of Thunberg - including Leonardo DiCaprio, Barack Obama, and Chris Hemsworth.