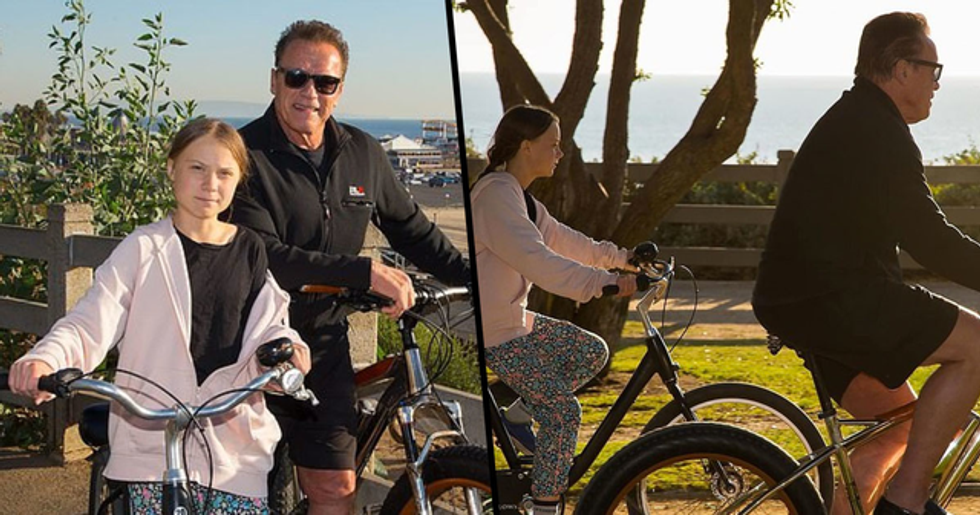 It's no secret that Greta Thunberg has amassed several celebrity supporters. The likes of singing sensation, Billie Eilish, Hollywood giant, Chris Hemsworth, and songstress, Janelle Monáe, have all backed the environmentalist's cause. And now, the acting legend, Arnold Schwarzenegger, is the latest to speak out in support of the teen.

During his press tour for the new Terminator movie, the star praised Thunberg and said that he thinks "politicians are listening." He has also gifted the teen with an electric Tesla car for her travels around the U.S... Not too shabby for a girl with a stolen childhood, right?

Greta and Arnie have struck up an unlikely friendship, and the pair have now been spotted enjoying a bike ride together. Keep scrolling for the full story...

The actor offered to lend her an electric car so she could get around the country without giving off any toxic emissions.

The pair became acquainted when, in May, Greta opened the 2019 Austrian World Summit of non-profit environmental organization R20 Regions of Climate Action, set up by Arnie back in 2011.

And, as a result, the pair have struck an unlikely friendship.

And Arnie is now one of her most vocal supporters.

They even went on a wholesome bike ride together.

Recently, Arnie shared a handful of photos of himself and the teen activist enjoying a spot of cycling together around Santa Monica.

And referred to Greta as his "hero" and "friend."

He seemed thrilled to have met up with Greta...

And even introduced the teen to his daughter, Christine.

It's great to see such high-profile celebrities get on board with the fight against climate change... Who will be next?
40%