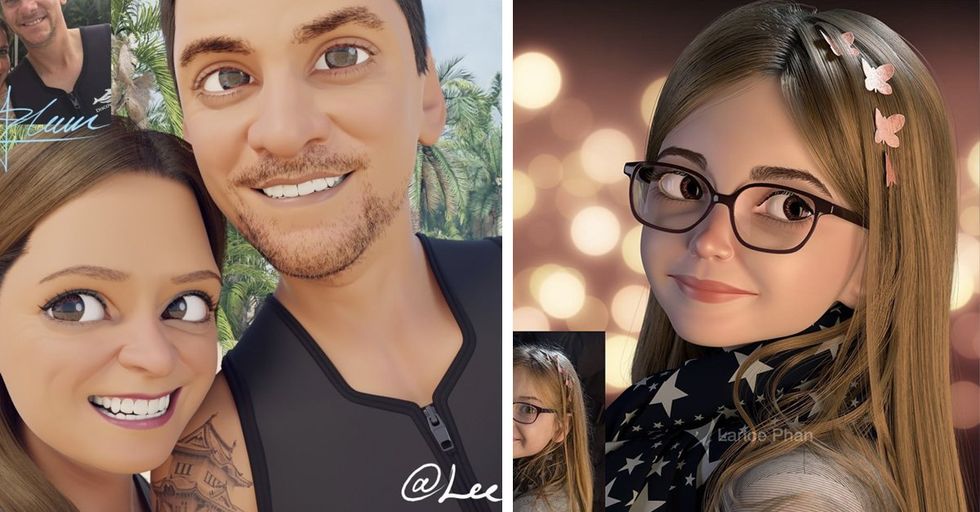 Everyone has, at one point or another, dreamed of being a character in a Disney movie. I am not wrong about this. Whether you want to be a princess, a prince, a trusty sidekick, or a background character (like Ariel's sisters in The Little Mermaid), we have all imagined what it would be like to be a cartoon character living in a cartoon world.

And now, it is possible for you to see yourself this way! Lance Phan is an amazing 3D artist who will transform you or your loved ones into perfect illustrations similar to a  Disney or Pixar movie. Seriously, this artist's skills are to die for. Below, you will see some of Lance's most incredible creations, and the real-life photo from which they were inspired to create these beyond-impressive portraits. Phan has more than 108,000 followers on Instagram and is constantly taking commissions!

Wait until you see these incredibly accurate Disney-like portraits of people like you and me.

No doubt they will spark something magical in your mind! Check out Lance Phan on Instagram to see more of the amazing work.

The attention to detail is incredible! From the color of his shirt to the expression on his face, Phan nailed it.

Gosh, I hope these two use this for their wedding invitation! They are almost as cute in the illustration as they are in real life.

If you scroll through these, Phan breaks down the whole process of creating one of these portraits, which makes it all the more impressive.

In Phan's caption, it is explained that whoever commissioned this illustration wanted to make sure the little girl was smiling instead of serious. I'd say Phan did an amazing job.

This is incredibly detailed!  There are even reflections in their eyes. Honestly, artists who can make art like this amaze me.

This might be the most accurate portrait of the whole bunch. Maybe it's because these people already look like they're straight out of a Pixar movie.

Here, Phan takes on a rare and interesting creature: the hipster gentleman. Can you see this character as a barista in a Disney movie coffee shop?

I love how Phan uses their imagination to enhance the backgrounds of some of these pictures. It really adds that extra something.

Smile for the camera

I'm imagining Phan sitting there trying to get every line perfect on that guy's button-down shirt. And I'm driving myself crazy.

In their caption, Pahn wrote about how they changed the background for this portrait and also changed the lighting to go along with the new background. I would never have even thought about that.

Wow, this is spot on. He's adorable in cartoon form.

Phan knows how to work with black and white as well as with color. This portrait is strikingly accurate!

According to Phan's caption, this amazing portrait was about eight hours of work! I believe it, and I am endlessly impressed.

Alyssa and her dog

Yes! I hadn't even thought about the possibility of Phan doing portraits of pets, but this is perfect. I love this so much.

This one is particularly awesome. The lighting is warm and inviting, and that little girl is pretty adorable.

Ugh, I cannot get enough of the colors in this one. Sunsets make me weep, I don't know about you.

Well, this dog is in the most regal of positions, and he deserves to have his portrait done in every single medium.

This looks like a still out of a movie about a superhero who has to disguise herself for a rooftop party in order to stop the evil villain.

It helps that this girl's eyes are a beautiful blue color in real life. The illustration isn't much of an exaggeration.

These two are so cute, it's almost too much. You can't take two cute people and illustrate them in Pixar style. That makes them too cute to handle.

Um, I don't know about you, but I would watch this movie in an instant. She looks so cool, it's not fair.

This one is a little bit different from the rest. Phan took some liberties, but honestly, it captures the essence of this couple perfectly.

Obviously, you need to feel like a Disney princess on your wedding day! That's a given. This is perfect.

This sort of "selfie" angle isn't the most common or easiest to recreate, but Phan did it with total ease.

Just take an extra moment here to look at the hair. It's amazing and detailed.

This one, to Phan's own admission, is a little different from the traditional Pixar style, but I think that's what makes it so unique and special.

For this one, Phan shouted out some assistants that they have that help with the portraits. Animation truly is a team effort!

It's crazy — there is something different about each portrait, but they still capture the essence of these people.

Last but not least.

Anyone you know could be the perfect subject for one of these Lance Phan originals! Share with someone who would make a perfect cartoon character.