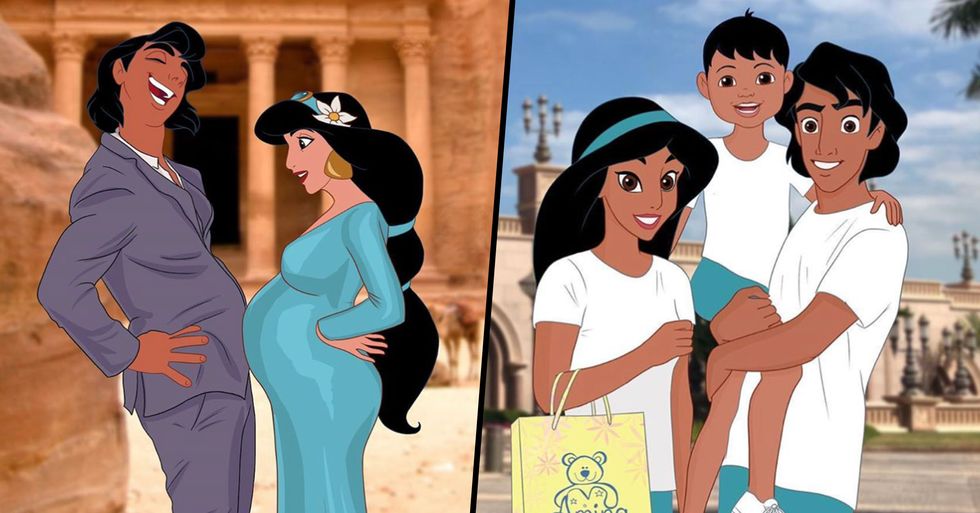 Have you ever wondered what happened to Disney princesses after the iconic line "...And they lived happily ever after?" Did they get married? Did they buy their own place? Or call it quits after a few months of dating?

Well, according to one artist, they all went on to have children with their princes and she's even gone as far as imagining what their children would look like. We're beyond amazed, that's for sure.

Have a look at the incredible pieces of art for yourselves...

Disclaimer: The princesses are also re-imagined so please look at these images without their back story. Enjoy!

A Russian artist with the talent to create some incredible Disney art.

While she is known for her pregnant Disney princesses series, she has also ventured into other areas.

And they are just as good.

Here's one of Cruella getting married:

And of course, her besties are there as bridesmaids too.

We can't forget about her hen party, can we?

It seems like it was one hell of a good time!

But have you ever wondered what happened to all the Disney princesses after the story ended?

Well, according to Oksana they settled down and some got married and, in the end, they all had kids!

Everyone is in love with the outcome:

Here's a beautiful shot of Ariel and her parents at her wedding:

And then she got pregnant soon after:

And even though Ariel actually had a baby, Oksana re-imaged him:

Now we have Belle at her wedding with her parents:

She also got pregnant afterward:

Up next we have Aurora:

Her pregnancy pictures had a modern influencer twist to them:

And it seems as though she loves playing dress-up with her baby girl:

Who could ever forget about Cinderella?

She also had their first child with her prince:

Here's a picture of her daughter in a cute mouse costume:

Now Jasmine and Aladdin haven't got married yet but they are still deeply in love:

And one final shot of the family shopping together:

Mulan also chose not to get married:

But she and Li Shang are still going strong:

Princess Tiana and her man are also planning on tying the knot, but not yet:

They've had a beautiful daughter though:

Pocahontas is also looking to settle down with her boyfriend too:

They had their first child together:

And finally, we have Snow White and her Prince Charming:

And that brings us to the end of the list.

If you loved those pieces of artwork, then keep scrolling for more Disney-inspired projects...
34%

$42.97 $27.93
Buy Now
See More Deals
We hope you find these deals as awesome as we do! Just an FYI: we may receive a share of sales from links on this page