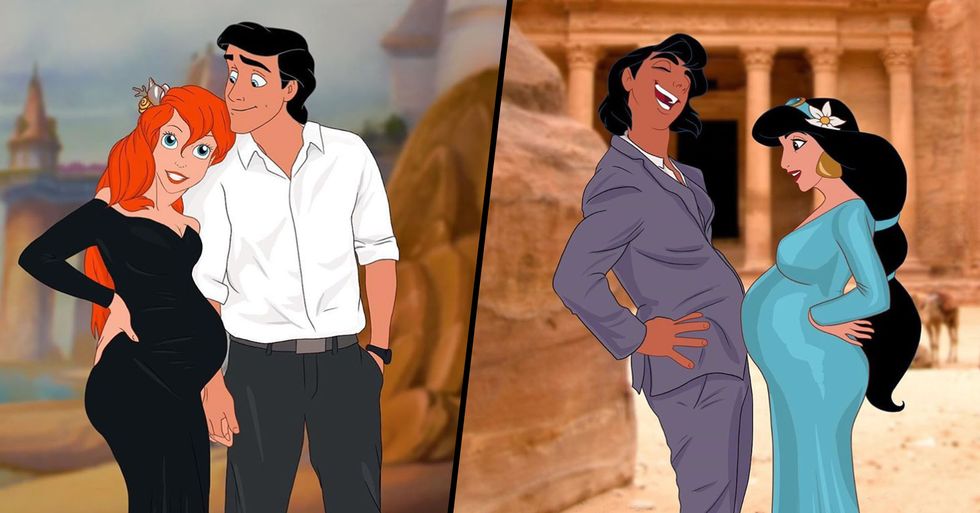 There's one thing that Instagram is consistently good for, and that's providing incredible artistic inspiration. And one account which has caught the internet's attention this week has really captured the internet's imagination. The reason? It combines two of our collective favorite things - Disney princesses and adorable pregnancy pictures...

It still bums me out that Esmeralda didn't end up with Quasimodo. It would've been a real confidence booster to us ugly dudes.

So that baby's going to grow up to be really strong, right? Like, unnecessarily strong?

So that baby's going to grow up to be really dull, right? Like, unnecessarily dull? (I do not think Snow White or Prince Charming have a lot of personality.)

You know this would be a seriously badass baby.

Kind of jealous of this beachside resort.

Posing on the beach - of course!

Of course these two would go for a comedy pose.

A woodland setting is perfect for these two.

Who knew these guys would end up as city dwellers?

Rapunzel as the Corpse Bride

Somehow, she still looks as cute as ever? It must be the hair.

The wild, curly red hair looks great for both normal life and Halloween, it seems.

A Halloween classic - but can you imagine the crossover movie, when the entire terrifying Hun army crawl out through our screens?

Is it just us, or is this smile a little too sweet to be a believable villain?

Rather than going for a movie villain, this pic utilizes a traditional figure from horror to truly spooky effect.

Esmeralda as the Scream killer?

The scariest ting about the Scream killer was, they could've been anyone... even a fictional cartoon character.

Here's what's so terrifying about this one — Snow White-as-Dracula is giving me some real "creepy old witch" vibes. How awful is it when heroes become the villain against which they were fighting?

Aurora as a scarecrow?

If Aurora is turning into Scarecrow the Batman villain, she has fear gas to wield against the prince, which makes him see his deepest fear. What would he see? My money's on commitment.

Cinderella as a zombie?

Gosh, I hope she turns back into her normal self at midnight.

One, two, Tiana's comin' for you, three, four, better lock the door...

Belle as a werewolf?

How mad do you think Beast would be if he went through all that trouble of turning into a man, only for Belle to be bitten by a werewolf and turn into a beast herself? Like two ships crossing in the night, these two!

Or how about these realistic Disney princesses?

Because none of us look quite like Sleeping Beauty when we're having a snooze, do we?

Even Ariel hates the front camera...

Hey! Ariel has the same amount of chins as us!

This takes us back to many failed photoshoots at the beach...

Not every marriage photo has to hint at a fairy tale ending...

I like this one. It humanizes them both. If I'd been able to earlier internalize the idea that no marriage is as perfect as they look at the end of Disney movies, I'd probably be married by now.

When you travel by plane, you gotta sacrifice beauty for comfort. That's why she's probably wearing sweatpants too.

Even Disney movies had outtakes.

How fun would this have been for the crew of The Little Mermaid? If this movie came out in the DVD era, I bet this would've ended up in the blooper section of the DVD.

Just imagine if your boyfriend ever saw some of the weird pics you send your friends.

Elsa was probably just trying to make Anna laugh over text. Let's not judge her for that.

You think having adorable birds wake you up makes mornings any easier?

I've made this face literally every single morning. People who yawn and look all cute when they first wake up creep me out.

It's all about angles.

This is yet another reminder to not judge your appearance based on selfies you take in bed.

Dude, do not show up early.

We all need a long time to make ourselves look presentable — even princesses.

And who thinks there might be someone inside the house when you press your face up against the window?

You think Snow White would've pressed her face that close to the window and make herself look like a damn Nosferatu if she'd known there was someone inside snapping pictures? Hellllllll no.

Being an Evil Queen can be emotional.

Crying while asking how pretty we are over Facetime? We've never done that, we swear...

Is there such thing as a cute front camera angle?

Facetime isn't the most flattering of apps as Cinderella will tell you.

And there's definitely no cute way to eat an apple...

Snow White is all of us.

Because who can look pretty when free-falling thousands of feet on a magic carpet?

Pocahontas didn't fare too well, either...

She still has that sass, though. But the latest Disney reimaginings might be our favorite yet ...

And there's one particular interest close to her heart.

She likes to draw these famous ladies as you've never seen them before. And there's one series that has gained a lot of attention - her pregnant princesses!

And it seems the princesses are loving the attention.

Keen for more Disney princess content? Scroll on for the Insta-artist who reimagines your favorite celebrities in the roles ...

Obviously we'd all want Idina Menzel to dye her hair blonde for any sort of live-action Frozen move, but if she couldn't make that happen? Margot Robbie could step in in a pinch.

Of all the animated movies getting live-action remakes, I feel like Hotel Transylvania might benefit the most. Imagine seeing all those not-quite-scary monsters on film? They might look a little scarier!

Yes. Perfect casting. Someone get on this. Right now. I want Tom Hiddleston to play all funny-yet-sinister mythological beings.

I think Mother Gothel is the most insidious Disney villain of them all. And so, I just want everyone actress to know that if they play her in a live-action adaptation of Tangled, I will hold an irrational grudge against you in real life. Sorry, that's just the way my feelings go.

This is a rad illustration, but we've already got the perfect live action Maleficent in Angelina Jolie. Sorry Eva.

Melissa McCarthy as the Queen of Hearts

This is another perfect bit of casting — Melissa McCarthy would be funny and charming but also have the potential to be scary if she played the Queen of Hearts.

Did Megan Fox get picked for this illustration just because she almost has the same name as Megara? Also, I can't imagine making this bizarrely-shaped hair work on film.

Hey, this is a little bit of future vision, as Halle Bailey is actually playing Ariel in the live action Little Mermaid!

Fawn is one of Tinker Bell's friends, and Jessica Alba already kind of looks like a fairy, so this would be ideal.

This illustration of Silvermist, another co-fairy in the Tinker Bell-verse, makes me realize how great it'd be to see ol' Tink get her own live action movie? I want to see all her pals in her own story! She needs something in her life beyond Peter Pan. That guy is not right for her (too big).

I already feel like Woody is as emotive as Tom Hanks, but it would be fun to see Tom Hanks in real life flip out over a snake in his boot.

While we've already seen Belle make the hop to film when she was played by Hermione herself, Emma Watson, Millie Bobbie Brown would also make a pretty great Belle.

I feel like Tinker Bell is the role Taylor Swift was born to play. What more is the song "Love Story" than a metaphor for Tink's relationship with Peter Pan while he's in love with Wendy?