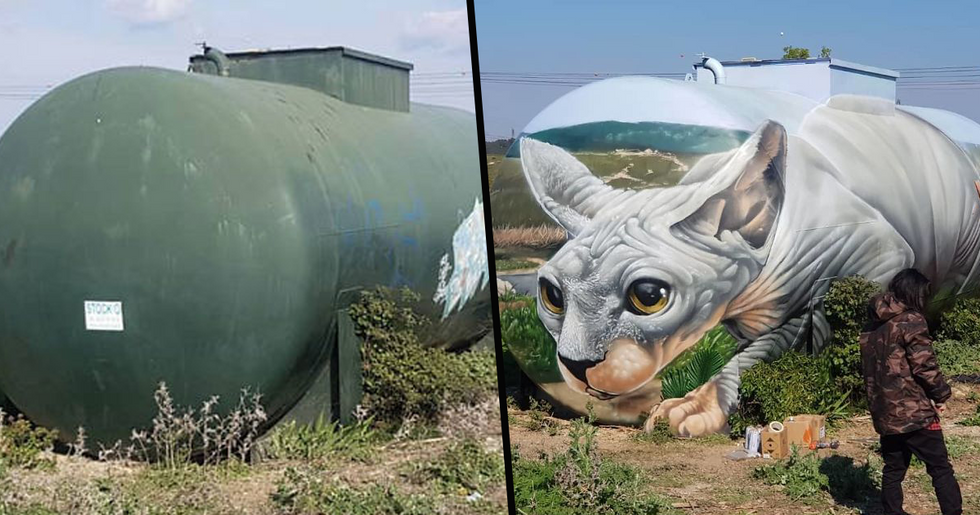 A French street artist has impressed the entire internet after showcasing his mind-bending illusion of a sphynx cat on an abandoned gas tank...

The beauty of art...

Is that there are no right or wrong ways of doing it.

Art comes in many forms...

And many artists enjoy expressing themselves through their many forms of artwork.

And, of course, some art forms are more unusual than others...

And people have different ways of making their art.

A blank canvas doesn't always have to be on an easel...

And many artists use outdoor public objects to express their art.

This is also known as graffiti...

But graffiti isn't necessarily a form of vandalism - which is the name it is often branded with.

Banksy is one of the world's most renowned street artists - and his identity still remains a secret to this very day. His work has been spotted in public spaces all around the world and it's undeniable how talented this man is.

A lot of artists have been following in Banksy's footsteps...

And creating art on unusual inanimate objects is now more popular than ever.

One of these artists is Tom Bragado Blanco...

The thirty-three-year-old street artist from France holds a similarity to Banksy - not only is his artwork incredible, but he also never discloses his identity on his social media accounts. It's only there for the art.

The quality of his work is astonishing.

It's clear that Tom has a lot of experience in his field.

And next to this mind-blowing quality...

Just look at this...

And we are honestly baffled as to how Tom has achieved this illusion.

Tom builds his work around what he is using as his canvas...

Whether that's a brick wall or the corner of a building.

A lot of art almost looks like a photograph...

And we are seriously impressed.

And he now has a lot of fans globally who greatly admire his work.

His work is stunning...

And his most recent piece of work has completely blown his fans away.

And he built it around the shape of the gas tank in order to create an optical illusion.

The finishing result is breathtaking.

Tom has paid an incredible amount of attention to every single detail, including matching the backdrop with the location of the tank.

He has used a technique called aerography for this piece...

Aerography is a surrealist method in which a stencil is no longer used in spray-painting and is instead replaced by a three-dimensional object. This method is mostly used to decorate tiles from the Victorian era and in the works of Man Ray, but Tom has adapted it to create his own unique artworks.

And we are beyond impressed!

Here is a before and after shot...

And make sure to check out Tom's Instagram for more of his work. Keep scrolling to check out the artist who has been recreating Disney princesses as modern pregnant women...