Artist Recreates Characters From 'The Simpsons' as Real People | 22 Words 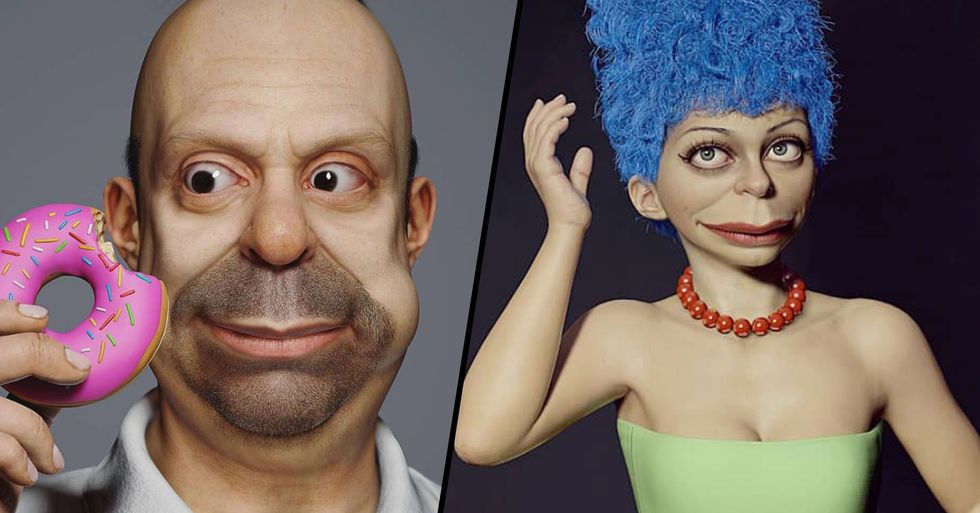 Artist Recreates Characters From 'The Simpsons' as Real People

The Simpsons is known for many things - long, rambling storylines, beloved and hilarious characters, and a nostalgically-appealing animation style.

But can you imagine our favorite cartoon family as real human beings? Keep scrolling to see what they would look like...

It first aired in 1989, and although it has stumbled along the way, The Simpsons still remains to be one of the most popular cartoons on television.

It's also one of the longest-running...

The world of The Simpsons wasn't designed to be realistic but has an undeniable visual appeal. The show also brought the idea of cartoons for adults to the mainstream.

Many of its most popular episodes are its most experimental, including the famous sequence in which Homer eats the world's spiciest chili pepper, then falls into a dream world with a coyote voiced by Johnny Cash.

Looking back, it's pretty difficult to criticize what many refer to as The Simpsons' "golden age." It was one of the rare shows which everyone seemed to enjoy.

It's probably one of those shows that will never die off.

Can we really imagine a world without our favorite cartoon family!?

Well, it seems that one artist has recently imagined the Simpson family in a very different way...

And he decided to recreate the family as real people.

Hossein Diba. Hossein is a character-based artist from Turkey who specializes in modeling, sculpting, texturing, and shading.

Having been designing characters and creatures for various projects since 2008...

For his latest trick, Hossein decided to try and recreate the infamous cartoon family as to how they would look if they were real human beings.

Because the finishing results aren't at all what you'd expect!

Firstly, we have the one and only Homer Simpson.

Yep, we won't be unseeing that one for a while!

Hossein explained that being in lockdown inspired this strange project...

He said in an interview: "When watching The Simpsons, I was always wondering how those forms would look like with realistic touches in details and textures - always wanted to do that. This quarantine life, besides all bad effects, had this little positive point. It gave me more free time to spend on my art and try those things I always wanted to."

Here is his take on Homer's wife, Marge...

And it kind of makes sense!

The artist has been sharing these creations on his Instagram page...

And he has even shared some insight videos on his YouTube channel which are simply fascinating.

Now, this is what the mischievous Bart Simpson would look like in real life... just check out that hair!

Whilst these 3D sculptures are incredibly impressive...

Many of Hossein's fans have commented about how his work has left them feeling "terrified."

Of course, we have saved the best till last...

Are you ready for the final creation?

Now this is truly haunting.

"Here is my version of Mr. Burns! again tried to achieve a nice balance between realism and stylized," the artist wrote on his post.

And make sure to keep scrolling to read about all of The Simpsons' predictions that came true...