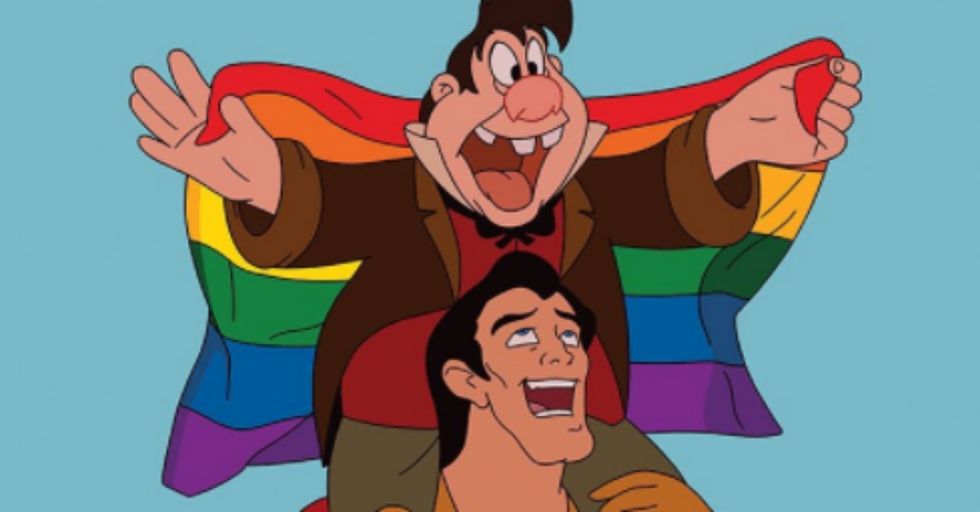 Artist Reimagines Disney Characters For Today's World, and the Results Are TOO REAL

London-based artist and illustrator Tom Ward decided to take Disney characters and transport them to 2017. This pretty much means he placed them in situations where he stripped away their innocence and made them jaded, sad products of capitalism and societal expectations.

No, but really, when you see the classic fairy tale characters we all love in today's world, the very real social issues we face on a daily basis become pointed and poignant. Take a look.

Genie and Aladdin are busy playing Overwatch and Jasmine's left to clean their crumbs off the magic carpet. Gender roles are so not magical. "I always appreciate visuals that feel familiar but say something new," Ward told Mashable. "Disney characters are so iconic that I thought transporting them to our modern world could help us see it through new eyes, giving me an opportunity to communicate some issues I feel strongly about. e.g. circus animals, pollution and the ivory trade, using friendly and familiar visuals with a darker tone."

Geppetto: "Oof, this is a terrible angle. It needs to be farther away. Pinocchio, tell a lie so we can get rid of my double chin."

Tigger, Simba, and Shere Khan could be sad circus cats if that's how you want to see this illustration. I prefer to see it as the opening shot of their emotional boy band ballad.

Cinderella did not escape her house, commission a gown from some woodland creatures, and ride inside a converted pumpkin to get ignored by Prince Charming at the ball.

You know why the Mad Hatter is so mad? Because he's been told to eat only plain veggies and drink only water in order to be fit and skinny and healthy and fit into the world's beauty ideals.

Shadow In the Night

This illustration just illuminates how inappropriate the whole premise of Peter Pan is. I don't know about you, but there's no way I'd let a flying boy into my window in the dead of night. Nope.

Robin Hood doesn't only steal from the rich and give to the poor. He also fights back against fox hunters. But look at those poor, shocked horses! They don't deserve this.

Dumbo is maybe the most terrifying Disney movie (um, "Pink Elephants On Parade," anybody?) and somehow Ward made it scarier and way sadder. That takes serious skill.

This one is Ward's favorite. He told Mashable, "If I was forced to choose, I think my favourite is the simplicity of Arthur from The Sword in the Stone and the message that he's too engrossed in his phone to realise his true potential in life." Or maybe, just maybe, Arthur is googling "how to remove giant sword from stone." Ever think about that?

Some people were upset that LeFou was depicted as gay in the live action Beauty and the Beast, but we love it. Gaston and LeFou looking ecstatic holding a rainbow flag is top-notch Disney reimagining.

The reality is that Baloo probably wouldn't have been allowed to keep hanging out with a little boy in the jungle once other humans came across them. But this is pretty hopeful. Mowgli's about to spring him from jungle jail!

Tom Ward doesn't just stick to reimagining Disney characters. His collection, The Movie Bunch, takes your favorite film nemeses and makes them stare each other down in a scene that looks like the opening credits of The Brady Bunch.

And in Movie Mats, Ward creates insanely creative beer coasters for imaginary movie themed bars. Do you want all of these? Because we want every single one of them. Check out Tom Ward's website for his other awesome work.
20%