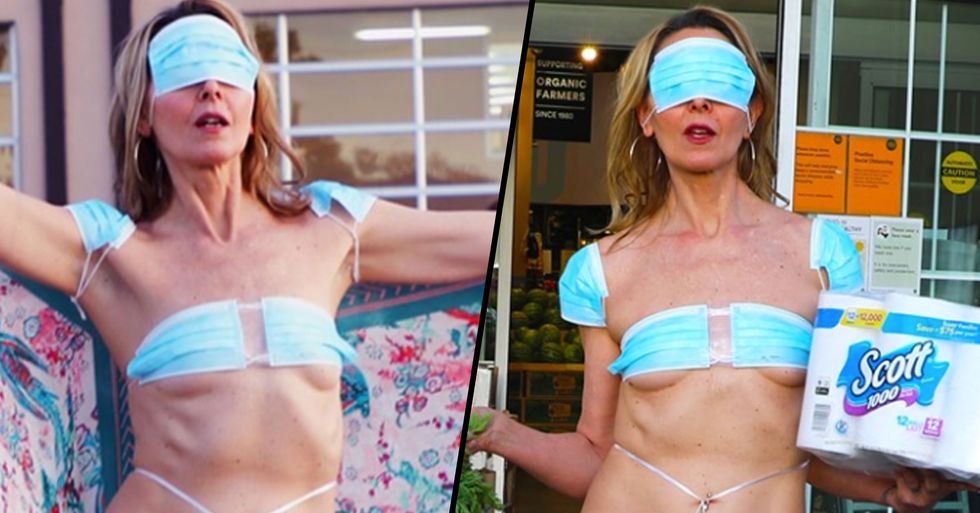 An "artist" has recently found herself in the hot seat after she decided to wear a face mask bikini outside a Trader Joe's store in order to protest the lockdown. Her explanation behind her decision was nothing short of idiotic.

Keep scrolling to see why she did such a careless thing in the name of "art"...

Our healthcare services are strained enough as it is...

During this difficult time, healthcare professionals are struggling to find the correct equipment and resources in order to do their jobs effectively.

Doctors and nurses have been pleading for masks.

Across the globe, staff have being forced to re-use dirty masks or even make their own.

How has this been allowed to happen?

Who are using medical resources as a selling-point to protest against the lockdown measures. Keep scrolling to see the revealing photos of her protest.

But now, to make matters even worse...

Some people have been deliberately going out of their way to make the lives of our medical workers even more difficult.

People are protesting for an array of different reasons.

But, regardless of why they're protesting...

It is undeniable that, by gathering in large groups, they are potentially endangering the lives of thousands, and are thus putting extra strain on our health care services.

@MarcZenn @declandebarra These scumbag "protestors" should be refused medical care if they get sick. Let them ride… https://t.co/V34DNEEbSm
— Ari Solomon (@Ari Solomon)1587344739.0

But, at a Colorado protest, some medical workers decided to take matters into their own hands.

Dressed from head-to-toe in scrubs, 2 medical workers have been seen standing valiantly and silently, arms folded, as they block a protestor trying to get past.

Cars blare their horns out of frustration, but the nurses refuse to move.

The video of the incident shows a woman in a t-shirt with an American flag on it, leaning out of her car window to shout to the healthcare workers, "Go to China if you want communism. You can go to work why can't I go to work?"

The woman in the car gets increasingly wound up...

And, as the nurses refuse to move, she turns her attention on passers-by who are calling her out.

Incredibly, the nurse stands calmly and silently throughout the entire interaction.

A single action can speak a thousand words.

You can watch the full video here if you haven't seen it already...

With most of these people praising the bravery of this valiant nurse and slamming the "indignity" of the protestor, we thought there would be hope that these protests would stop, but of course not...

And one woman has taken things to a whole other level.

As part of her lockdown protest, she decided she would use medical masks to make a "bikini."

The self-proclaimed "artist" who goes by the name DaVida Sal took to the nearest Trader Joe's in order to stage her "artistic" protest, while other confused customers continued to go about their daily lives, grabbing their groceries.

With a face mask over her eyes and other regions, she made her statement.

In her Facebook caption, she wrote this: "I shall not blindly follow. A Living New Modern Fearless Priestess makes her own rules and she wouldn’t ask anyone for permission to be herself."

On another, she said this:

"The new terms, ‘Social Distancing’, and particularly, ‘wrong think’ are right out of an Orwellian nightmare revision of America’s constitutional rights and guaranteed freedom. Don’t fall for it! Don’t let them get away with it!" I mean, if she put her energy into doing something good, then maybe this would be a whole other story, but right now, she just looks like an idiot.

And obviously, her charade didn't end there...

People were left appalled by her so-called "protest."

This Facebook user urged her to look at the privilege of being able to stay home while essential workers are out there helping the country move forward.

"This makes me sick to my stomach."

And these users pointed out some important facts.

The healthcare system is already as strained as it is without people like this using crucial resources to cover their nether regions.

When will this madness end?

We can only hope that these deluded protestors will soon see the errors of their ways, and give our health care workers the rest that they both need and deserve. These last couple of months have been unbelievably difficult for our medics, and the behavior of the public certainly hasn't been helping. Keep scrolling to read the heartbreaking story of the nurse who was greeted with empty shelves in her local supermarket after a forty-eight-hour shift...