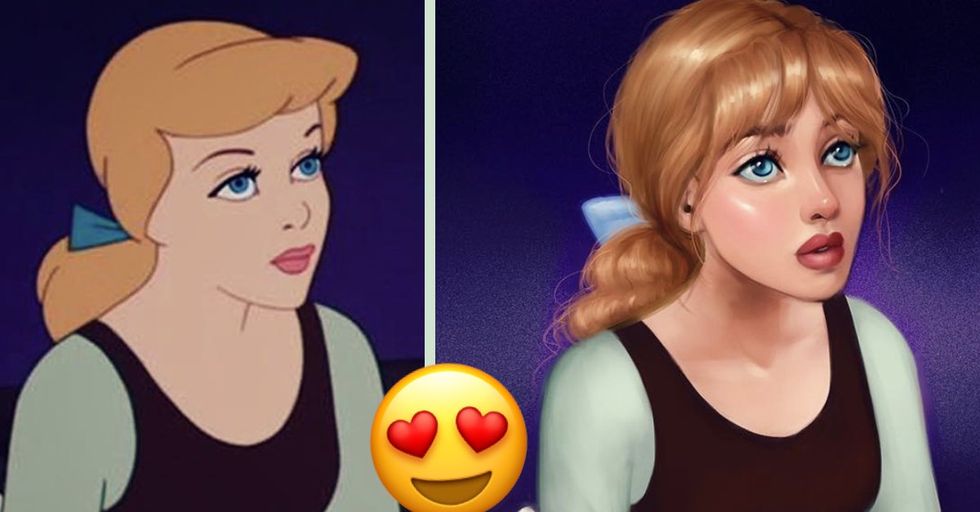 If you haven’t already seen the magical art by Isabelle Staub, you absolutely have to! She’s a freelance artist and illustrator with a mind-blowing Instagram account. In the last couple of years, she has taken to illustrating the Disney princesses. Her art translates their original cartoon look into Isabelle’s own design; still stylized, but much more intricate and realistic! And that's not all, as Isabelle's character designs aren't just Disney. She covers all of the pop-culture trends!

You can say this artist is gifted—and she is—but it also takes a huge amount of time and practice to make art this lovely. So scroll down and appreciate the skill that went into these paintings. Get ready to see Disney’s princesses, among other popular characters, reimagined in this incredible series!

Let’s start off with Sleeping Beauty!

That memorable, dreamy smile has been brought into a new, more detailed style. Aurora looks dazzling!

Here’s Tiana, from "The Princess and the Frog."

Just look at our hardworking princess from New Orleans! We'd say she's not 'almost there'; this is a gorgeously polished piece of art!

Esmeralda from "The Hunchback of Notre Dame," looking mysterious and gorgeous.

Esmeralda ??technically not a princess but she's one of my favs. -isabelle_staub

Bonjour, Belle! Isabelle has totally nailed the look from the Disney classic, The Beauty and The Beast.

Look at this lovely painting of Pocahontas!

It's safe to say that this artist can paint with all the colors of the wind.

How about "The Little Mermaid?"

Here’s Ariel, fresh out of the sea!

Someone even got a tattoo of her Ariel drawing!

Someone out in the world loved Isabelle's work so much, they got it inked onto their body forever. That's a sign of a great artist.

And then there's Isabelle's interpretation of Halle Bailey as Ariel.

We know Halle Bailey will be taking on the iconic Disney role in the upcoming live-action remake, and here, Isabelle took a swing at how she might look. I don't know about you, but I think this would be a great new look for Ariel.

Even after seeing all these Disney princesses rendered in Isabelle's style, it still blows my mind how they look simultaneously cartoon-y and realistic. Like, no human being has eyes that big! And yet, my brain still tells me that this is how Jane would look in real life! What's that about?

Here's Roxanne from A Goofy Movie.

Okay, yes, this painting is great. But do you know what else is great? A Goofy Movie! It's a legitimately good move! Give it a chance if you haven't recently!

A side-by-side look at the different Jasmines.

Each of the princesses resemble their original designs without copying them completely. We absolutely love Isabelle’s version of Jasmine!

Here's a sketch of Princess Jasmine.

This to me is one of the best examples of Isabelle's ability to create recognizable drawings of characters that are still in her style. I mean, this image is both Princess Jasmine as we know her and Princess Jasmine as only Isabelle could draw her. It's very cool.

And don’t forget Kida, from "Atlantis!"

Kida, of course, is both princess AND queen - and she looks it in this painting.

Now, I'm not here to body-shame any Disney Princesses, okay? Just take that as read. But I do love how, when Isabelle draws their entire body, she gives these characters more curves — they don't maintain the wildly unrealistic body proportions of most Disney princesses.

The flower that blooms in adversity…

Isabelle has definitely done justice to the savior of China!

While she clearly hasn’t quite made it to the ball in this painting, Cinderella is as beautiful as ever!

Check out this version of Snow White!

That’s one heck of an evolution.  Think about it: Disney's Snow White and the Seven Dwarfs first released in 1937. Every new take on this Princess re-imagines a look that is 81 years old!

Another technicality, as this character isn’t really a 'princess.’

But Meg is still a great character, and definitely deserving of a creative makeover!

There are plenty of other Disney ladies to paint.

You don't need to be a princess to be compassionate, lovely, nurturing and determined. Nani from Lilo and Stitch proved that!

She’s even done a version of the evil Ursula’s human form, Vanessa.

And she's looking just as villainous now as she did then.

And check out these amazing 2018 version of Esmeralda!

Both versions are lovely, aren't they?

Here's her take on singer SZA.

Isabelle can even render celebrities in her incredible style, as this awesome depiction of SZA shows.

Lana Del Ray always looks tremendous, but that's doubly true when she's being painted by Isabelle. Looking at this painting, I feel like I have knives in my heart.

The Grinch, if the Grinch was a girl.

Playing Prudence on The Chilling Adventures of Sabrina is what made Tati Gabrielle's name. And now, she's being painted by incredible internet artists. She must be doing something right!

Isabelle has also done a ton of wonderful non-Disney paintings!

Call me, beep me!

Did you watch the Disney Channel’s Kim Possible, growing up? Because here she is, in a more realistic incarnation!

And here’s Penny Proud, from "The Proud Family!"

What an adorable re-imagining of Penny! Isabelle's portrait is filled with life.

Lady Gaga at the Met Gala.

Lady Gaga is known for her wild fashion choices. (remember the meat dress? I can;t think of it without getting hungry, which I do not think was the point.) Here, Isabelle's painted Gaga during a Met Gala. Somehow, those eye-spikes are part of one of Gaga's most conventional looks.

This super-cool retro-inspired piece shows the kind of attitude I wish women had in the '50s. That's right ladies, drink those tears and go about your day, powered by the devastation of those who have wronged you.

Man, after looking at so many adorable pieces of Isabelle's work, it's quite a jolt to see this one. The fact that she can do both lovely and terrifying shows just how versatile an artist Isabelle Staub truly is.

This is "American Candy," an original piece.

Now we're talking. This is the kind of fun, imaginative painting I love to see. And look at those colors! They make me want to go buy a cotton candy and go to town.

This painting is a wonderful painting of Yara Shahidi.

The star of Black-ish and Grown-ish captured the artistic eye of Isabelle Staub as well. The result is an incredible sketch with just the right touch of color.

It's cool to see that, as well as being delightful to look at, Isabelle's original work also has a sense of humor about it.

An Aquababe video that is just so satisfying to watch.

Watch this video. Seriously. The way Isabelle uses that pencil to add depth to her sketch is deeply satisfying.

And her style has evolved a lot over the years.

She calls this one "Galaxy Girl."

As much as I like seeing Isabelle's take on Disney princesses, I think this might be my favorite piece of hers. There's just so much style and personality here.

This is a very cool drawing, and it doesn't hurt that it's the Netflix Sabrina, not the ABC "The Teenage Witch" Sabrina. (AKA the best Sabrina.)

Daenerys from Game of Thrones

A take on Frida Kahlo.

In what looks to be a slight deviation from her usual painterly style, here we see Isabelle's take on Mexican painter Frieda Kahlo. Great artists gotta respect other great artists!

Another deeply satisfying video to watch, Isabelle uses glitter to make our queen, Beyoncé, a crown. And when that excess glitter slides off? Ooh, it feels nice.

When you look through the work of a painter like Isabelle, it's easy to forget the importance of linework. This Marilyn Monroe sketch shows, especially in the hair, how gorgeous lines can be.

Here's her take on Sailor Moon.

I know it would take roughly 10,000 years to animate — I know, I know — but I would still love a Sailor Moon anime done in this style. If we get started now, we can maybe have the first season done before we die.

Check out this painting of Zendaya.

If you want a glimpse into the process of making these paintings, check out this video of Isabelle painting Zendaya. It looks so easy, but you know it's the result of years and years and years of practice.

A study of model Gigi Hadid.

Here we again see Isabelle's ability to capture the likeness of a celebrity. But also? Those highlights coming off the water and on her hair are amazing.

And another sketch, this time of Harley Quinn.

One more very cool, stylized sketch here from Isabelle. Since Harley's such a colorful character, I'm really hoping one day Isabelle gets around to giving this one the full painting treatment!

Who here remembers the wild Thornberrys!? I hope to one day be as cool as Debbie. -isabelle_staub

Let's kick it off with Blossom, the upbeat team leader now in her young adult years!

And here is Bubbles!

Everything from her face to her iconic pigtails has evolved!

Of course, we can't forget Buttercup!

Looking just as punk rock as we always knew she was!

Here are the Powerpuff Girls all together.

And finally, here are all the Powerpuff Girls together, looking every bit the power trio they are. Isabelle's rendition of these characters almost feels like it could be concept art for a Powerpuff Girls reboot (probably just titled "Powerpuff" and directed by Christopher Nolan.)

Isabelle even did a portrait of the most recent Powerpuff, Bliss!

Isabelle has also re-imagined Pennywise as a spooky female clown from, It. Regardless of how cool this painting is, please run away if you see either of them in a storm drain!

Get ready for Jessica Rabbit!

How about the gals from "Scooby Doo?"

We’d say she did a fine job with our favorite childhood detectives!

Here’s Isabelle’s take on Chel, from "The Road to El Dorado."

Isn’t she the cutest?

Even a color study (of Moana) looks beautiful!

She looks like she's straight out of the movie!

Isabelle has also used her talent to draw real-life people.

Like Beyonce, from the Lemonade album! How cool is this interpretation of Beyonce's look?! Share this crazy-awesome art with all your friends and fellow Disney fans!