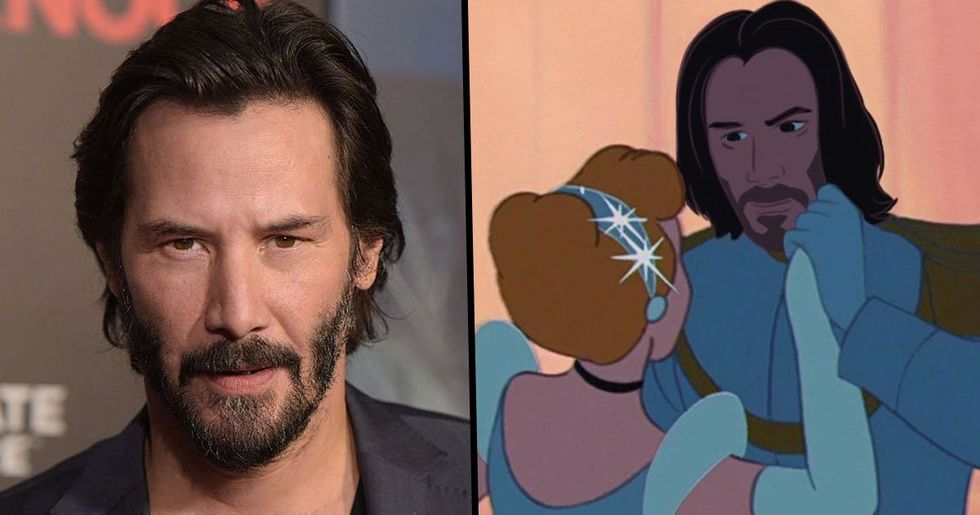 Artist Turns Keanu Reeves Into All Your Favorite Disney Princes

Someone intellectual, a philosopher or something, once said: "art is beauty, beauty is art."

Never was there a clearer example of this than today.

All of the Art School kids may as well all drop out now and get into accounting or something because we've hit the pinnacle here, people - the divine.

Keanu can certainly make a man out of me.

Or, I mean, you know, like, train me to be in his army and then accidentally find himself falling in love with me, which he'll have conflicting feelings about until he realizes that I am actually a girl.

In the end, he'll forgive me for being an imposter and understand that I only did it to keep my family's honor intact.

And, actually, why shouldn't I fight? Clearly, I'm better than most of those guys in our troop. We'll end up getting wed and we'll have a big ol' party with my ancestor's ghosts. Aw, romance.

I feel like, even as The Beast, Keanu would be a hotty.

So in this dream scenario, a rugged beast of a man invites me to chill in his massive mansion. He's probably neighbors with Miley Cyrus or something...

After a bit, I'll realize that he won't let me leave and I'm like, "dude?"

But then he puts on a banger, which given the acoustics of the high ceilings in the library means that the song really fills the space. We awkwardly start to dance around and, as we're dancing, his beastly face melts away to reveal Keanu Reeves.

Me, Miley Cyrus, and the Hemsworth brother that she's married to cannot believe it!

Again, we end up getting wed and we become known throughout the neighborhood for having the most wicked Christmas lights. Aw yeah...

Now Keanu would never get involved in the colonization of Native Americans...

I feel as though the Keanu-version of the actually pretty nasty John Smith would be much more above board.

Keanu Reeves/Smith would save Pocahontas' tribe.

He would execute the nasty John Ratcliffe and bury him under the talking willow tree. The tree would thrive from the nutrients of the colonist criminal and would bear fruit for everybody to enjoy. Aw yea.

Imagine waking up from a deep coma that your wicked stepmother inflicted on you (actually, going back to Miley Cyrus  - Snow White is a bit like that Black Mirror ep that she's in... anyway!) to Keanu Reeves!

And Keanu is all like "Hey girl wanna be my Princess?"

Or, actually, being Keanu, he would probably be way more polite than that. In fact, there's no way that he'd kiss you without your consent, so you'd probably wake up to him just sitting there looking lovingly at you. That's when he'd ask if you, you know, maybe would want to, like, take his hand in marriage - but with no pressure or anything! Oh Keanu, you put Prince Charming to shame.

We already know that Keanu doesn't care about material wealth.

It wouldn't take too much of a stretch of the imagination to picture Keanu falling in love with a peasant girl, like Cinderella. But, wait, doesn't Prince Charming think that Cinderella's wealthy because she gets all dressed with the help of the squirrels and birds? Well, Keanu definitely seems like the kind of guy that would be into an animal-loving lady.

I bet you a pretty penny that Keanu Reeves is a beautiful sleeper.

Petition for Disney to superimpose Keanu Reeves' face onto every Prince in every animated movie!

I'd chop off my shimmering mermaid tail for Keanu Reeves any day.

Sorry, Sebastian buddy, but there's no contest between you fishy lot and the ultimate catch that is Keanu Reeves.

I bet that the real Prince Eric wouldn't even take poor Ariel back to the beach for a visit.

I'll tell you who would take her to the beach. Keanu Reeves.

Under the Sea with Keanu Reeves.

Could life get any better? I mean look how cute he looks in a wetsuit!

You get three wishes. With each wish that you make, you are awarded five minutes with Keanu Reeves. So worth it.

How many frogs would you kiss if there was a chance that Keanu Reeves' soul was in one of them?

The thing is, the trope of the Disney Prince has always been a bit of a letdown.

Think about it though, they never have any depth. Typically, they're just these dumb dudes, like the "popular boy" who breezes through high school by the merit of his looks and ends up working as a cab driver, dampening the potential of the class beauty by getting her pregnant at sixteen. Keanu Reeves, on the other hand, is definitely more of the boy next door/ dorky best-friend type that ends up growing into a cool, attractive guy, with a wicked job who never loses the sensitivity that he had that made you like him in the first place.

Someone get Disney on the phone. This is happening. If you want to check out any more of Crystal Ro's wonderful artwork, check out her Instagram: @crystal.ro. Trust me, you will not be disappointed. Not had enough of reimagined Disney characters yet? Check out these way more realistic Disney Princesses. You won't regret it.