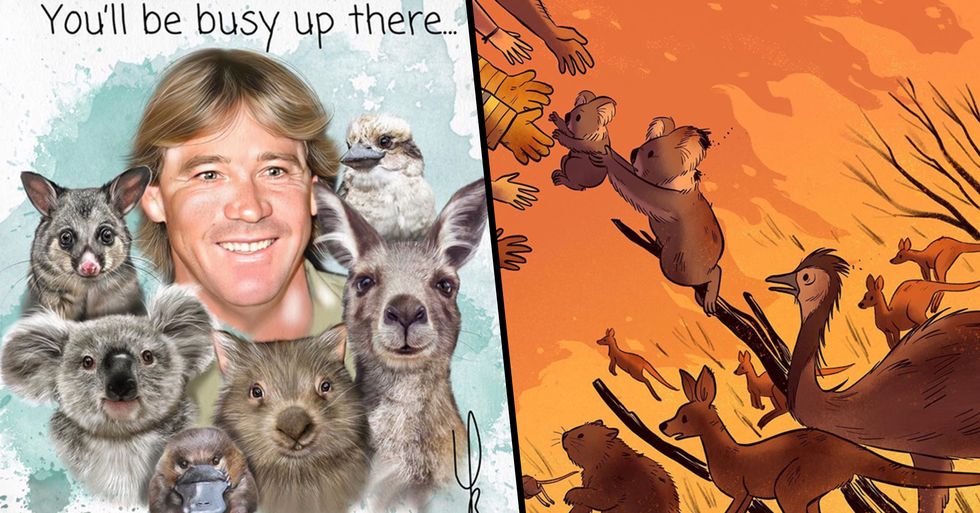 Keep scrolling to see the beautiful art created by people all around the world to pay respects to the disaster.

Last week, as firefighters from the U.S. arrived at Sydney airport, everyone had an amazing reaction to the team's arrival.

Let's just hope that all of the hard work and efforts of these amazing volunteers will eventually start to pay off.

Alongside the stellar work being done by the firefighters ...

Others are also doing what they can to help. And one tribute to the fire in Melbourne's famous Hosier Lane has really captured Australia's attention.

This is Andrew Gibbons.

The graffiti artist is based in Melbourne, and has been badly affected by the ongoing bushfire crisis.

He helped to organize a fundraising event.

"We got together to paint and raise money for bush fire recovery here in Australia. The support was great and what cant be done alone, maybe we can get done together."

And his final product has gained tons of positive feedback.

People are absolutely loving the mural and the message of hope it represents.

"Shout out to all the people facing the blaze and caring for the lives affected most Rural Fire Services in this instance was meant generally and not pertaining specifically to NSW registered fires. The money raised is all being passed on to the WWF wildlife recovery fund."

And that's not the only bushfire-inspired graffiti.

Although it's safe to say not all of it has been quite so heartwarming. And people from all around the world have come together to share their creative tributes. We've got thirty of our favorites.

"This beautiful planet is the place we all call home, and everything we do impacts it directly. My heart breaks at all these disasters, but it also makes me more determined to do my part. Less meat, choose wisely, buy less and support those who care about our planet’s future. We can do this!"

"It is heartbreaking to see more wildfires happening on our Earth."

"My illustration for the Australian bushfires. I can’t seem to find any more words that haven’t already been said, there’s only sorrow and tragedy. I pray for Australia, the people, and wildlife ..."

"The numbers are nothing. Statistics are nothing. The next news about fires is nothing if we ourselves do not want to help our planet Earth. But we hear, watch and read news about 500 million dead animals due to the global fire in Australia. This is worse than war. We are slowing down and waiting for the receipt of money to extinguish the fire. When animals and forests die at this time. It is very sad that we are fixated on finances."

"I really wanted to show you the salvation of the Child and Mother, that everything went well, that nature heard us, and the long-awaited rain began. But... for give me. It’s very sad. I want you and I to understand that we are not alone on this planet. Man should not assert himself in his superiority from other creatures of nature. Don’t say that the fires are due to the dry season. This's all a lie! These fires are a reflection of our relationship to nature itself: ruthless and cruel."

"I keep thinking... what would Steve do if he was here? We miss you mate. We need people like you, more than ever."

"Making illustrations often is a way for me to cope with things happening in the world. That's why I made this illustration today. I am devastated and my thoughts are with all the people in Australia right now."

"Together, we are stronger. Today I saw the picture of a young kangaroo who got caught in a fence trying to escape the fire. It really shows how vulnerable the animals are in the face of the raging flames. I kept tearing up while drawing this but I wanted to remind everyone that every small bit you do, whether it is donating a few dollars, knitting mittens for the injured animals, or volunteering your time to help the victims of the fires, it all COUNTS!"

"My heart for Australia."

"Pray for these innocent ones who can't even tell their pain."

"At least 25,000 koalas are believed to have died in a horrific wildfire in South Australia that may have devastating consequences for the survival of the species."

"I can’t help being thoroughly sad and disturbed by this awful tragedy. Over a billion animals have already perished. This illustration is my way of releasing the overwhelming emotions of sadness and worry."

"Lately, the news around the world has been awful. I posted this in my stories multiple times, but one of the things that several artists are raising awareness for is the Australian fires. If you didn’t know, Australia is literally on fire. ONE BILLION animals are estimated to have died. More than 17.9 million acres have been burned in Australia so far. This is larger than the countries of Belgium and Denmark combined! It’s so bad, that the smoke is affecting other countries."

"This is terrible ... I couldn’t leave it without attention."

"As many of you guys may have already heard, Australia is burning. The bushfires have ravaged countless homes, destroyed millions of acres of land, and taken the lives of millions of animals across our country. It’s heartbreaking to watch all the footage of what’s going on, and right now our country needs all the help it can get."

"Yet another catastrophe, yet another image that tear our hearts from our breasts. More than 6.3 million hectares of land are on fire, many dead animals including 8000 koalas ... We can do something in our own small way, give what we can and hope that this nightmare will end."

"Despite all the sadness this news causes, many people are doing their best to save the lives of those who have somehow managed to distance themselves from the fire. A hospital has been set up to take care of injured animals! I read news of people giving water to the lost animals and taking it to the nearest safe place … May everyone working on this mission continue to have strength and hope on better days!"

"Our hearts are broken. I just can't comprehend what has happened to our beautiful country over the last few months especially the past week. 480 MILLION animals have been killed. I have no words."

"We have been absolutely blown away by the support and donations for the Australian animals! You are all AMAZING!!! We decided to leave it open for another couple of weeks so that we can donate as much as possible. In the meantime, Harper sat down today and drew her own sweet little piece and we absolutely love it!"

"I couldn’t stay quiet, but I couldn’t move either. This world is turning scarier by the minute, darker, burning either due to fires or wars. Many know about Australia’s bushfires, burning up for over 4 months now and there’s no prediction on when this hell will end. Do you know what can never end though? Hope. Faith. Love. Actions."

"As surely all of you know how terrible the bushfire situation is right now in Australia, I would also like to make sure that you know that there are so many ways to help no matter where you are on earth. There are many trustful organizations which really need help with donations, no matter how small the amount is, every penny counts! I listed some organizations below which you can donate to."

"Our shadow does not put out the fire." Paul Eluard

"Somewhere better than this."

"Let's raise awareness about the importance of taking care of the planet."

"Australia is still burning. Lots of animals and people need help and we can help them even on the other side of the planet."

"Pray for Australia. Save the planet."

These tributes are truly beautiful - but there are also some horrific images of the disaster. Scroll on for fifty of the most powerful images of the bushfire crisis.