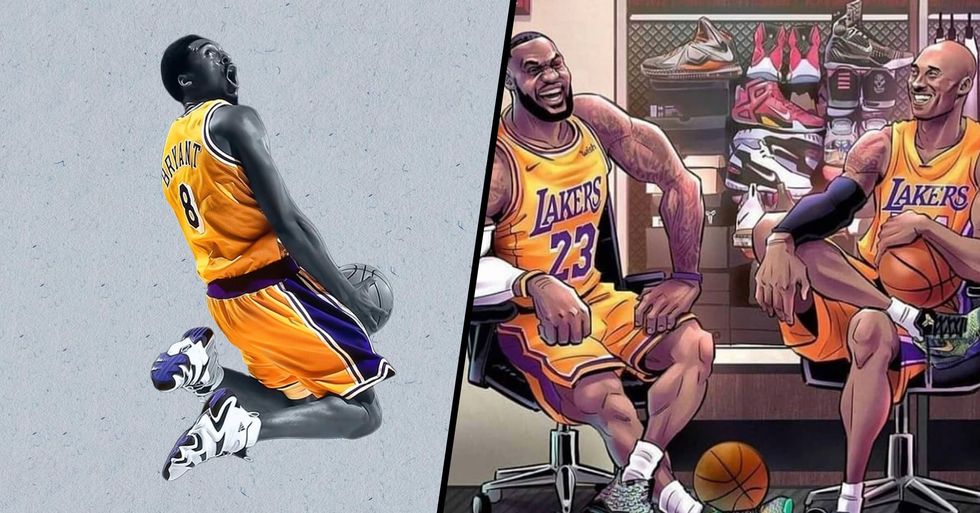 The internet's heart was broken when it was revealed that the legendary NBA player, Kobe Bryant, had died in a helicopter crash on Sunday morning.

He was just forty-one-years-old, and 9 people are now confirmed dead - one of which was his thirteen-year-old daughter Gianna Bryant.

The entire world has been mourning this terrible loss and tributes have been made worldwide - including these stunning pieces of art.

It was confirmed that Kobe Bryant tragically died in a helicopter crash on Sunday the 26th of January, 2020.

He was a true legend in the sport...

And by his second season, Kobe had been named an All-Star and he was branded as one of the greatest basketball players of all time.

The pair were both just 17-years-old but quickly fell in love - becoming engaged after only six months of dating. They were married in 2001, and their first daughter arrived in 2003.

They went on to have 3 more daughters...

Amidst his busy schedules balancing family and work, Kobe was known for opting to use a helicopter for travel...

But tragically on Sunday morning, his private helicopter went down and a "fire broke out."

And there were 9 bodies found at the scene. Reports confirmed that his wife, Vanessa Bryant, was not among those on board.

TMZ Sports reported that Gianna, aged thirteen, had also tragically died in the crash. It is thought that the father and daughter were on their way to the Mamba Academy for basketball practice, nearby Thousand Oaks.

In fact, from childhood, Gianna would participate in the team warm-ups and she has been proving her abilities as a skilled player over the last few years.

We cannot imagine what the families of the lost are going through right now...

It is completely unbearable to imagine.

People from all around the world have started to pay their tributes and respects...

And a lot of artists have put together their talents to remember the late Kobe and Gianna Bryant.

So many people around the world respected Kobe...

And many find peace from his death by drawing it out on a piece of paper.

This basketball court in the Philippines was completely transformed with paint...

And this was done just a mere few hours after the accident, outlining Kobe and Gianna's relationship perfectly.

The fact that Kobe and Gianna were together until the very end has touched many people...

And this artist has incorporated this beautifully in this pastel drawing.

And this artist felt the chaotic combination of Kobe's iconic purple and yellow colors was a tribute enough.

This artist has beautifully used the classic purple and yellow tones to capture Kobe's spirit.

This artist has captured Kobe at one of his best moments.

He had the world in his hands...

And this artist has played on this in their cartoon of the basketball player, having him hold the world instead of basketball.

Gianna was her father's daughter...

And this pen drawing captures this amazingly.

Showing Kobe doing what he did best.

This piece stands out beautifully, with the attention purely being on Kobe's strong and powerful figure.

This sketch is so touching.

A minimal touch with only a  splash of color.

A portrait of friendship...

LeBron James has opened up about his grief, and we're sure this beautiful piece of art would make him smile.

We couldn't have put that better ourselves.

These tributes are truly beautiful...

And our thoughts and condolences go out to not only the Bryant family, but to all of the families who have lost loved ones in this terrible accident.