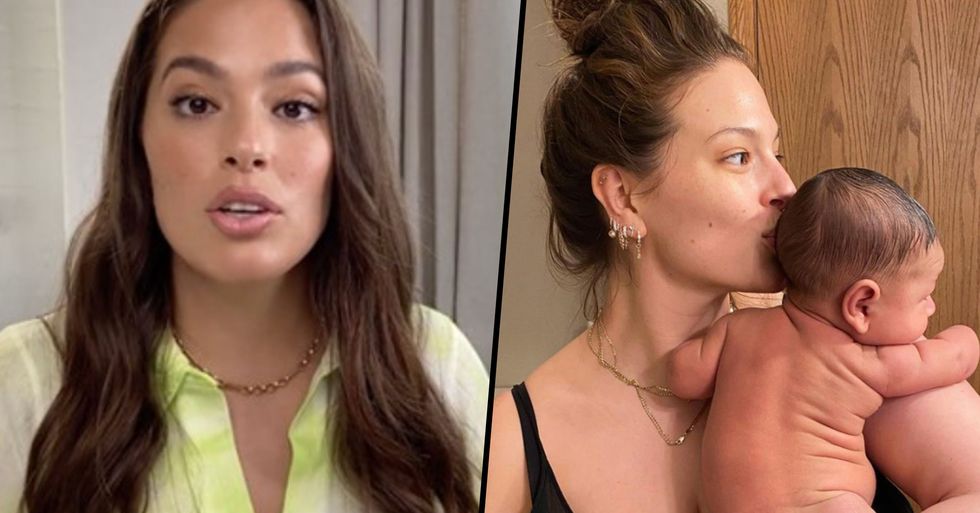 If you're wondering what your life is missing, the answer is Ashley Graham. Ashley is an American model who has also taken on the role of a body rights activist. She is not only an incredible role model for young women but also anyone who has ever felt insecure in their body. Many people know her as being a plus-sized model, but Ashley has smashed those stereotypes, claiming that there is no need for that kind of title; she is a model and an incredibly beautiful one at that.

And now the inspiring model has hit back at mom shamers - in the best possible way.

Ashley started her life much like the rest of us; normal and full of struggles.

She was born in Nebraska and lived quietly in a small town.

The best thing that ever happened to her, happened in a shopping mall.

She was discovered while she was shopping at a mall in Omaha in 2000, and since that mall trip, her life has never been the same.

Before all the glamour and the photoshoots, Ashley faced some struggles.

She was diagnosed with ADD and dyslexia at a young age. This diagnosis caused her to struggle with understanding herself fully. "Even when I go to the teleprompter sometimes, I remember that feeling. But I have to just shake it off and go back to my affirmations," Ashley said in an interview with Glamour.

She rose straight to the top.

Since her discovery, she's been featured in Vogue, Sports Illustrated, Glamour, Elle and Harper's Bazaar, among other prestigious magazines.

In 2001 she signed with Wilhelmina Models.

The company is one of the most well-known modeling agencies and has been for decades. Wilhelmina has also signed other famous models, such as Cara Delevingne and Kendall Jenner.

She's been featured on many magazine covers, but also in commercials and some TV appearances.

Ashley played the leading lady in DNCE's music video Toothbrush. Joe Jonas was lucky to stand alongside her.

But Ashley's career has not been shy of controversy.

She appeared in a pretty controversial Lane Bryant ad that many people thought was too "inappropriate" for television, which is pretty ridiculous considering every other lingerie commercial shows the same amount of skin, if not more.

Graham was also one of the first plus-size models to appear in the pages of the "Sports Illustrated" swimsuit issue.

And since this appearance, she has broken many stereotypes surrounding what a typical model should look like.

Much of Ashley's career has been centered on self-confidence, breaking stereotypes, and embracing your inner and outer beauty.

She is loud and proud of who she is, and she wants others to feel the same.

Ashley has also started her own line of lingerie.

The Ashley Grahm Collection has been quite a hit. She also started the empowering hashtag #IAMSIZESEXY to inspire others to have confidence and comfortability with their own sexuality– something she feels very passionate about.

She's been invited to speak at a variety of events.

Her speaking skills are amazing– if not better –than her modeling skills.

Ashley has also been a back-stage judge on Miss USA and Miss Universe 2 years in a row.

She crushed it with her poise, elegance, joy and humor.

Aside from her world-dominating career, she's struck gold with her husband, Justin Ervin.

The couple, who met at church in New York City, tied the knot 9 years ago.

Justin popped the question with a custom diamond ring.

It's the stuff of every woman's dreams, let's be honest.

The couple are so cute.

And while we expected a celebratory Instagram snap of the happy couple on their anniversary, we certainly weren't expecting what we got instead...

The couple announced last year that they are expecting their first child together.

In the video posted to Instagram, Ashley and Justin turn the camera on themselves and zoom out to reveal the model’s baby bump. “Surprise!" they yell as Ashley rubs her belly. The expectant parents then go on to share a kiss to mark the happy announcement.

And people couldn't be more happy for the couple, with one user writing: "You’re going to make the best parents," while another said: "That glow though!! Congratulations to you both." What a way to celebrate your anniversary.

But being a mom is never easy.

And this week, Ashley has hit back at mom-shamers in an incredible way - and the internet is loving it.

Since welcoming son Isaac in January, it seems Ashley has had a rough go of it.

Mom shamers have been pestering the star with rude comments for months.

"It’s interesting because my whole career has been based around body-shaming," she explained.

"I’m a curvy girl who has come into a skinny world and said that my body, and other bodies like mine, need to be normalized."

But mom-shaming was a whole new ball game for Ashley.

"I knew that it was coming and I was ready to combat it, but it never feels good to have someone tell you that you’re not doing a good enough job; that you’re doing something wrong."

And, for Ashley, these comments can be hugely hurtful.

But, it seems Ashley has come to a realization about the situation.

"They're just mean girls who grew up to be mothers," she joked.

Want more from the scandalous world of mom-shaming? Scroll on for Reese Witherspoon's latest scandal.