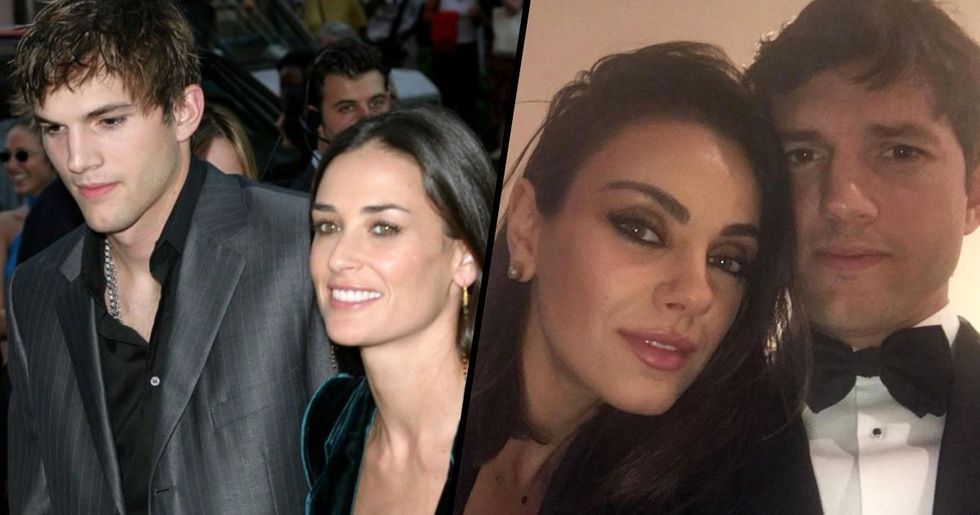 Divorces are always complicated and messy, but when it comes to a celebrity divorce... it's on a whole other level.

Celebs get divorced all the time, and while the majority are fairly civil and are quickly moved on from, there are some who use their position in the public eye to get some pretty gristly revenge on their ex.

Demi Moore has released a book, Inside Out, an autobiography of her life so far, and, of course, she couldn't not mention the hardships of her marriage to ex-husband, Ashton Kutcher.

She makes some pretty bold remarks about the actor, of which he and his now-wife, Mila Kunis, have spoken out about.

Demi Moore is one of Hollywood's most iconic beauties...

The fifty-six-year-old actress has had her fair share of moments in the spotlight, such as her leading role in Ghost back in 1990 and Indecent Proposal in 1993.

She has dated quite a few famous names over the years and has been married 3 times - first, to singer, Freddy Moore, in 1980, when she was just seventeen-years-old (but they divorced 4 years later). She then married Bruce Willis in 1987. Their marriage lasted eleven years and they had 3 children together.

She began dating actor, Ashton Kutcher, in 2003. They married in 2005 and Willis himself attended the ceremony... looks like they did end on good terms!

The couple had a very public relationship...

The pair were constantly posting on social media and gushing over one another, making their relationship very much known to the entire world. There's nothing wrong with a little PDA, but come on guys...

There was trouble in paradise, however...

In 2010, when the pair were supposed to be celebrating their fifth wedding anniversary, rumors were circling that Kutcher had a one-night-stand with a woman named Brittney Jones. Despite him firmly denying the allegations, the media didn't seem to buy the claims of innocence.

They remained in high spirits on social media...

But you never know what goes on behind closed doors. In 2011, the couple were photographed visibly arguing in public and they began spending more and more time apart from each other.

It seemed that Kutcher had eyes for other women...

Later, in 2011, Kutcher was photographed leaving a nightclub with a blonde woman and driving away with her - some pretty incriminating evidence that he was being unfaithful. Moore posted a not-so-vague tweet, saying: "When we are offended at any man's fault, turn to yourself and study your own failings. Then you will forget your anger."

By the end of 2011, Moore announced her plans to leave Kutcher.

"It is with great sadness and a heavy heart that I have decided to end my six-year marriage to Ashton. As a woman, a mother and a wife, there are certain values and vows that I hold sacred, and it is in this spirit that I have chosen to move forward with my life," she wrote in a statement.

Was it simply down to marriage being too difficult?

A few days after Moore's announcement, Kutcher tweeted: "Marriage is one of the most difficult things in the world and unfortunately sometimes they fail. Love and Light, AK."

But many seem to believe that Kutcher was to blame...

In April of 2015, actor, Scott Eastwood, appeared on Watch What Happens Live and he reportedly revealed that his girlfriend had cheated on him with Kutcher during the filming of Two and a Half Men, and he claimed that it was the "catalyst that broke him and Moore up."

Despite this apparent feud...

Moore claimed in an interview that she and Kutcher remain on good terms, in which she said: "We have some things that overlap... it’s friendly. But we’re not... hanging out."

But her new book says otherwise...

Inside Out was released last month and, in the autobiography, Moore has made some pretty bold claims about her marriage to Kutcher.

Moore makes claims in her book that Kutcher pressured her into having threesomes...

She wrote that she "went into contortions to try to fit the mold of the woman he wanted his wife to be" during their marriage. She also added: "I put him first. So, when he expressed his fantasy of bringing a third person into our bed, I didn't say no. I wanted to show him how great and fun I could be. They were good people, but it was a mistake. I was strangely flooded with shame."

She also addressed the infidelity rumors...

She alleged that, on one occasion, she read reports of his infidelity via a Google alert on her phone, before having to step out onto a red carpet minutes later. Speaking on ABC News, Moore said she immediately called him to "ask if it was true," before claiming that he "admitted it right away." She added: "I think my response was, 'Are you f****** kidding me?' That was it. And I think I could barely take a breath."

So what does Kutcher have to say about these claims?

Kutcher has been happily married to actress, Mila Kunis, since 2015 and they have since had 2 children together.

"I was about to push the button on a really snarky tweet. Then I saw my son, daughter, and wife and I deleted it," he wrote on his Twitter page along with a love heart emoji.

He even went on to post his phone number so that people could contact him directly to get "the truth." Wow.

According to sources, Mila Kunis isn't at all happy about Moore's actions...

Hollywood Life heard from a source: "Mila hates that Demi is airing all her dirty laundry in her book because it involves so much stuff that she doesn't want her kids to ever read or be made fun of for."

But it seems that the pair' aren't letting these rumors get between them...

Kutcher posted an adorable Instagram snap this week of himself and Mila enjoying some quality family time at Disney.

It remains unknown as to whether Moore's accusations are true...

It seems that Kutcher has put up a strong barrier of defense that he won't be letting down any time soon. Want to read more about Ashton Kutcher and Mila Kunis? Keep scrolling to learn about how they reacted perfectly to rumors that they had broken up...