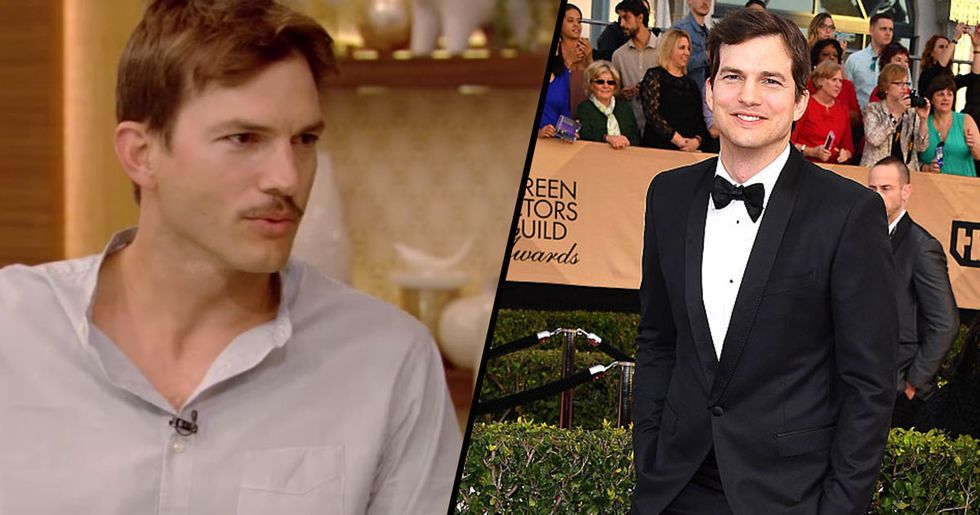 Let's be real here. Ashton Kutcher and Mila Kunis are the dream couple.

Not only are they both totally gorgeous, but they have also been bossing the world of marriage and parenting since they tied the knot in 2015.

But the pair have frequently spoken out about their parenting methods, and many have been shocked to hear that despite their million-dollar fortune, they don't indulge their children at all.

Ashton has even spoken out about not setting up a trust fund for their children, so keep scrolling to find out more...

Ashton was Mila's first kiss when he played her high school sweetheart on screen. They started dating years later, in 2012. They got engaged in 2014, and now have two kids - Wyatt and Dimitri.

Ashton was born in Iowa to a relatively Catholic family, whilst Mila was born in the Soviet Union and located to the states when she was just 7 years old.

Mila said she was raised in a culture where holidays such as Christmas weren't necessarily a fun time.

"I come from communist Russia, where you're not allowed to be happy, so my holiday traditions are 'be quiet,'" she told Entertainment Tonight.

It wasn't until she came to the United States that she saw Christmas as a magical holiday.

She added, "In Russia, back in the day, it was a very religious holiday, so you don't celebrate Christmas if you're not Christian and if you're not at Mass. So, I being Jewish, was like, 'Christmas is not for you.'"

"We came to America and were like, 'Christmas is so inclusive,'" she said.

"We literally bought a Christmas tree. So as far as tradition goes, my family's big on any excuse to get the family together and it drunk."

"Whether it's Easter, which we've now all accepted into our Jewish household, or Christmas, it doesn't matter. It's all family time, but having kids, we're building up our own little versions of tradition."

So, even though Mila is Jewish, she eventually got on board with celebrating the Christian holiday and getting into the Christmas spirit. But she was still adamant about not giving her kids presents for the holiday... You will want to hear the reason why.

"So far, our tradition is no presents for the kids," she said.

"We're instituting it this year because when the kids are [younger than] one, it doesn't really matter." She said that her kids have been spoiled by their grandparents in the past, which inspired her and Ashton to make this new rule.

Mila said, "Last year when we celebrated Christmas, Wyatt was two and it was too much. We didn't give her anything — it was the grandparents."

She went on, "The kid no longer appreciates the one gift. They don't even know what they're expecting; they're just expecting stuff." When kids are inundated with gifts, they stop acknowledging each one and just expect to open things all day.

It's not as if Kunis and Kutcher don't want their kids to enjoy Christmas; they just want them to learn to appreciate the gifts they receive.

"We've told our parents, 'We're begging you — if you have to give her something, pick one gift. Otherwise, we'd like to take a charitable donation, to the Children's Hospital or a pet [or] whatever you want.'" She said, "That's our new tradition."

The kids are so small that they probably won't remember much of these Christmases anyway.

Opening stockings and gifts on Christmas morning is a tender memory for many people, but when the holiday centers too much around gifts and material things, it can take away from the true essence of the holiday.

It seems that Ashton and Mila know what they're doing when it comes to raising well-rounded people...

And it goes to show that spoiling children isn't the way of proving you love them.

It also isn't a good way of raising children...

Ashton spoke of this very recently during a the Dax Shepard podcast "Armchair Expert."

Ashton announced in the podcast that he and Mila aren't creating trust funds for Wyatt and Dimitri.

It is reported that he said he'd hear out their business ideas when they're older but wouldn't give them special treatment.

Ashton alone has an estimated net worth of $200 million.

"My kids are living a really privileged life," Ashton said, "And they don't even know it!"

Ashton and Mila aren't the only wealthy parents to take this approach with their kids...

Other wealthy individuals such as Sir Elton John, Simon Cowell, and Sting have all spoken out about how they do not plan on leaving their children vast amounts of money.

These stars all have one thing in common...

They believe in teaching their kids the value of money and hard work.

This parenting method has also been used by billionaires...

Consider Bill Gates, who said he would leave $10 million to each of his three children — only a fraction of his $108 billion net worth.

Many believe giving children vast amounts of money is no favor at all...

Speaking in a 2013 Reddit "Ask Me Anything" forum, Gates said: "I definitely think leaving kids massive amounts of money is not a favor to them." Money has a lot of value, and it's so important to teach children that they must work hard if they want to earn money, rather than spoiling them rotten and bringing them up believing they can have anything they want - that will not build a respectable and well-rounded person.