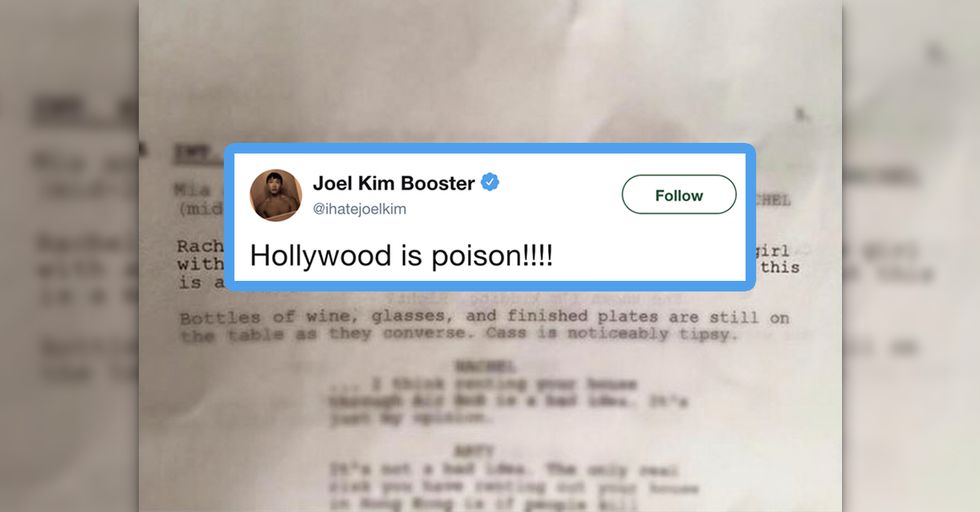 We've known for a long time that Hollywood is far from perfect. From racism to sexism and homophobia, there are many problems to address. While we've been working to recognize those problems, it's important that for anyone and everyone who sees them, they should know when to call it out. And that's just what one actor did, in front of everyone on Twitter.

Recently, Asian actor Joel Kim Booster tweeted out a picture of a script he was reading. The script shows an obviously racist line, written about an Asian character and his white girlfriend. Upon posting, Joel's tweet (specifically, the picture of the script) sparked quite a bit of outrage in the online community. And while many were enraged, there was also a sweet outpour of multi-racial couple photos posted in rebuttal. Keep reading to find out how this all started, and why this is so important!

He’s an actor, comedian, and writer. A recently, he had something big to say on Twitter.

Kim shared a snapshot on Twitter, of a script he was reading.

And, as you can see, that script was extremely problematic.

We all knew that Hollywood had a problem with racism, and this illustrates that, despite recent successes like Crazy Rich Asians, we’ve got some work to do.

Many of them were along the lines of this!

Even Seth Rogen displayed some shock.

And that’s not all he said!

Rogen and Kim had a small conversation thread.

Auditioning must be fun, especially with these types of scripts.

Don't worry, Seth Rogen is on the case!

Some laughed at the script.

This user knows what the real unrealistic qualities in this script are!

Others were taken aback.

@ihatejoelkim As someone who reads scripts for a living, I'm constantly amazed at the archaic verbiage used by some… https://t.co/Gr5P1LYTRX
— Danny Manus (@Danny Manus)1539582703.0

It’s unfortunate, but true that some professionals still allow racism into their work.

At least some people are aware of the problem.

@DannyManus @ihatejoelkim This is the VERY reason I refused to let the 1st script I wrote with a partner be sent ou… https://t.co/CIzuS30RtB
— lyn wheaton (@lyn wheaton)1539615721.0

If only things like these were not written in the first place.

One Twitter user was happy to point out the script’s obvious flaw in logic.

I mean, really. Have you seen John Cho?

And, of course, the list doesn’t stop at one.

There are plenty of handsome Asian actors who play "realistic" romantic interests.

But we don’t just have to reference actors for this!

Many, many couples became Jim from The Office after this tweet.

And we got to see living proof of some real-life relationships!

Our history of unrealistic thinking goes back a long way.

Hollywood might be confused by this, but we sure aren’t.

This is the definition of fighting ignorance with love.

I think the only unrealistic thing is thinking this wouldn't happen.

I don’t know, they seem pretty realistic to me.

No matter what they look like on the outside!

Life has moved on, leaving art stuck in the past.

15 years of lacking realism is a long time.

They seem none the worse for wear, though!

And 16 years is even longer!

How sweet is that?

The thread was a real hit with many people.

For unrealistic people, they look so happy!

These people are happy to live in "denial."

And apparently, love knows no bounds. Certainly not ones as trivial as this!

Ain’t this the truth:

It's time for us to end the ignorance!

When the whole family is confused:

What a cute reaction to this whole thing!

This sweet photo came with a hopeful message:

@ihatejoelkim This is me and my unrealistic wife. But it's only unrealistic because she's way too good for me. Lite… https://t.co/xEia8NGe4b
— Leonard Chan (@Leonard Chan)1539708713.0

And we hope he’s right!

With 500+ comments and a lot of great couples’ photos, it really should be.

So let’s encourage Hollywood to be a little more realistic with its casting!

After all, it’s a big, diverse world out there. Time to start representing all of it—without the snide remarks that non-white people and interracial relationships are ‘unrealistic.’