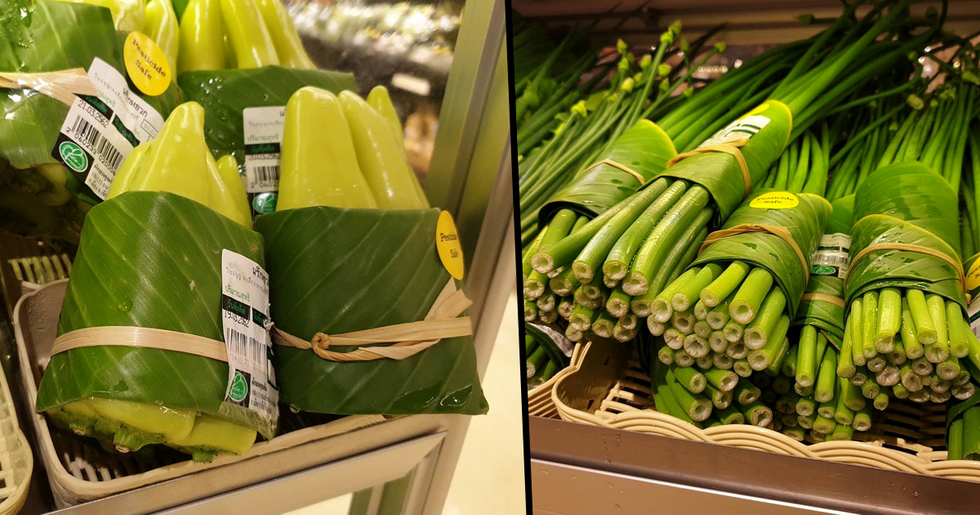 Asian Supermarkets Use Banana Leaves Instead of Plastic Bags

We all know that plastic bags are basically the root of all evil, but that doesn't stop us from using them.

They're convenient, readily available and are very much integrated into our daily lives; so much so that it seems impossible to imagine a world without them.

But the damage that they cause to the environment and to living creatures is indisputable. Something clearly needs to change. And soon.

Some countries have made a good start by imposing a charge for single-use plastic bags, while others, like China, have banned them completely. But what's the alternative?

Supermarkets across Vietnam and Thailand think they that have come up with the perfect solution.

And just wait until you see what else it can be used for...

We all know that plastic bags are bad for the environment.

But that doesn't seem to stop us from using them. In fact, about one-hundred billion plastic bags are used every year in the US alone.

And even more shockingly, only a minuscule amount of these bags are actually recycled.

The majority are only used once and are thrown away or discarded. And did you know that it currently costs more to recycle a plastic bag than to simply produce a new one? With an estimated five-hundred billion to one trillion plastic bags being consumed worldwide every year, that's a hell of a lot of waste.

So, where do all these bags end up?

Well, the majority end up in landfills. And it can take up to one-thousand years for them to decompose there. That's a very long time!

Burning them is not an option.

Not unless you want to unleash toxic fumes into the air that you and your families will breathe in on a daily basis. No, doesn't sound too pleasant to us either...

Many end up in the ocean.

As well as in rivers and lakes wherein they often strangle, or are ingested by, marine life, causing health problems, distress, and even death for these poor creatures. And even more worryingly, plastic bags that find their way into waters never completely biodegrade. Instead, they just break down into smaller and smaller pieces and become microplastics, which are even easier for large sea creatures such as whales to ingest.

It's estimated that fifty-two per cent of the world's sea turtles have eaten plastic debris.

Research from the University of Queensland discovered this shocking statistic and also unearthed the fact that the majority of this plastic originated from plastic bags. Overall, about one-hundred thousand animals such as dolphins, penguins, and whales are killed each year due to the presence of plastic bags in the ocean.

Even more shockingly, it's been predicted that by 2050, there'll be more plastic in the ocean than fish!

How is that even possible? And more pressingly, how have we allowed this to happen?

And it's not just marine life that is affected.

Land animals are equally at risk. Cows, for example, often ingest plastic that's found its way onto their grazing grounds; this is particularly problematic in India, where cows are plentiful and litter collection is poor. Upon later inspection, cows that have died from ingesting plastic have been found to have eaten up to fifty plastic bags!

And let's not forget our friends in the sky.

An estimated one million birds die because of plastic bags each and every year.

Many also find their way into sewers.

Yes, in urban areas, wildlife is less likely to be affected by plastic, but that doesn't mean that it's not problematic. Sewage systems often become blocked by a build-up of plastic, causing a whole host of problems.

A huge amount of petroleum is needed to actually create these plastic bags in the first place.

Petroleum is a non-renewable resource, which means that it will eventually run out. And to make enough plastic to meet global demand, around sixty to one-hundred million barrels of oil are needed each year. What a waste of a precious resource!

Not to mention the detrimental effect that plastic packaging has on us!

Food that is consumed or heated in plastic bags or containers has been known to cause certain cancers, ulcers, asthma, and even obesity. And it's not as if we don't already have enough of these problems in society as it is, without additional factors increasing our risks.

So, what can be done to stop this widespread problem?

How about using paper bags instead of plastic? Well, unfortunately, paper bags are also bad for the environment. Americans currently consume more than ten billion paper bags each year, which amounts to roughly fourteen million trees being cut down. It also takes a lot of water to produce paper; we are talking hundreds of thousands of gallons!

So, what's the alternative?

There are many reusable grocery bags available on the market such as this easy-fold variety. They're not the prettiest, but they're definitely better than plastic. But, of course, you must remember to take them with you when you go shopping. There's no use leaving them in the kitchen or the trunk of your car!

They even make ones specific for fresh produce.

It's ridiculous how much plastic packaging is used to wrap up fruit and veg. Is it really necessary? Of course not! Why not take yourself down to the local market with one of these produce bags and fill your boots? And, bonus! The fruit and veg there is likely to be fresher, tastier, cheaper and with less nasty pesticides.

But it shouldn't just be down to the individual.

Surely grocery stores should have an environmental conscience? Maybe for once, they should think less about profits and more about the sustainability of our planet and the life on it.

Well, they are doing thier bit.

In the UK, shoppers now have to pay for single-use plastic bags, which has reduced usage of them considerably. But is it enough?

In the US, currently, only Hawaii and California have banned single-use plastic bags.

But many other states, including Washington, D.C and San Francisco, CA, have imposed a tax on bags. This has had positive results. Usage of plastic bags has decreased in these states. New York will be banning plastic bags as of March 2020.

And certain countries have even banned disposable plastic bags altogether.

Italy, China, Bangladesh and several countries in Africa are all fighting the good fight and have banned all single-use plastic bags and packaging. In fact, China, who was the first country to impose a ban back in 2008, have reduced their usage of plastic bags by a whopping sixty-six per cent. No wonder their fruit looks so happy.

But this means that they have to provide customers with an alternative storage solution.

This can be a recyclable container or a non-plastic bag, perhaps made from cotton or mesh. Now doesn't that look nice? You can actually see all the colorful, tasty fruit and vegetables. But it's not as good as this inventive packaging...

Supermarkets in Vietnam and Thailand have come up with an ingenious way to store food without the use of plastic.

Yep, they are using the humble banana leaf to wrap up their fresh produce! Seriously, how much more appetizing does this food look than fruit and veg confined within nasty plastic?

It may seem unusual, but banana leaves are actually ideal for this.

Banana leaves are large, thick and supple so that they can easily be folded around produce without fear of them snapping or breaking apart.

And with the addition of bamboo, the wrapping process is complete to perfection.

Much like banana leaves, bamboo is readily available locally and is extremely cost-effective in countries in which it grows in great supply. And, of course, it is completely biodegradable.

The use of banana leaves to wrap food is nothing new.

People in Asian countries have been using them to wrap meats whilst cooking them as it helps to keep them tender. And, of course, we know that they are often used to wrap rice in Asia, too!

They can also be used as plates and bowls.

We know these look complicated to make, but why not give it a go? Banana leaves can be purchased frozen in most Asian and Chinese food stores from as little as $1.50. And they will definitely make a good conversation piece at your next dinner party!

Other countries use them, too.

Tamales in Mexico are often wrapped in banana leaves and Hawaains use them to wrap pigs when roasting them so that they don't become burnt by the hot lava rocks!

But don't be fooled into thinking that they can only be used with food products.

Oh no. They have a wide variety of uses! In their early stage of growth, they can be used to treat burns. As well as ulcers and diarrhea. Remember this if you can't find a late-night chemist!

Brilliant idea! A sudden downpour of rain, no umbrella to hand... what's the next best thing? A thick and water-resistant banana leaf, of course!

This dude even made plant pots out of them.

Pure genius! These look great and they are one hundred per cent natural and biodegradable. They should start stocking them at Home Depot!

Just imagine if all of our fruit and veg aisles looked like this!

We would be able to actually smell the freshness of the produce. See the vibrant colors! Surely this is the way forward! #SayNoToPlastic