Asteroid Could Hit U.S One Day Before 2020 Presidential Election | 22 Words 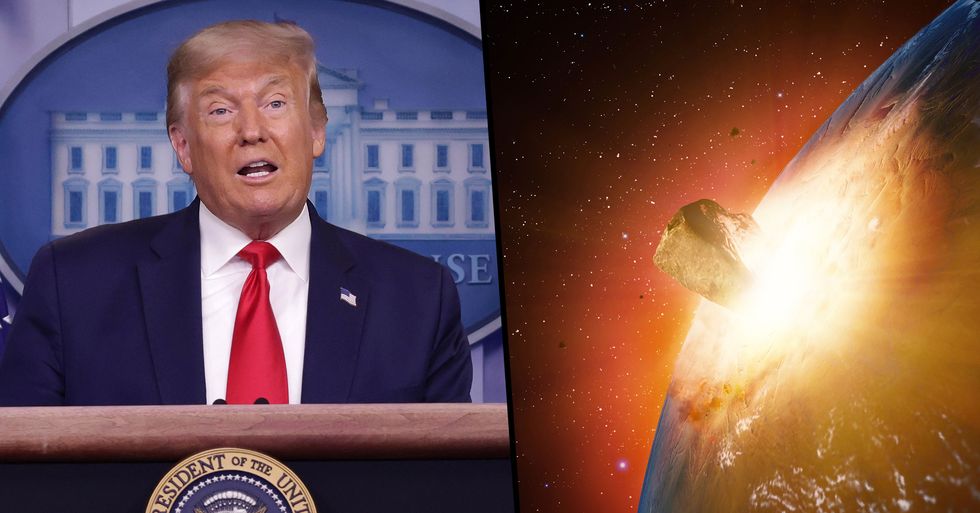 Asteroid Could Hit U.S One Day Before 2020 Presidential Election

Just when you thought 2020 couldn't get any worse, experts from NASA have come forward with a rather sinister prediction...

We just can't catch a break, can we?

I think we can all agree that, so far, 2020 has been a downright dreadful year.

First, there were bushfires...

And then along came a global medical pandemic.

And now, we may just have an asteroid on our hands.

Experts from NASA have come forward this week with claims that an asteroid may very well be making a bee-line to our planet... And the date in which it will hit is nothing short of eerie.

Doomsday theorists went crazy when the Mayan calendar - a system of calendars used in pre-Columbian Mesoamerica and in other modern communities in the Guatemalan highlands, Chiapas, and Mexico - announced that the world would be ending on December 21st, 2012.

And people all over the world braced themselves for their grizzly end.

The way in which the world would end wasn't specified in the calendar...

But many speculated natural disasters such as a giant tidal wave, an Earth-wide earthquake, or a tremendous volcanic eruption.

And, of course, the huge asteroid plummeting into Earth was a popular theory, too.

It's what wiped out the dinosaurs, right?

As the infamous date approached, tensions surrounding the end of the world rose...

And many people were genuinely preparing for the end, with some throwing doomsday parties and others stockpiling on supplies and building underground bunkers.

And, guess what? The world didn't end after all!

Most of us breathed a sigh of relief and went on to enjoy our Christmas worry-free...

But the lack of asteroids confused a lot of people, and they were left wanting answers. When is the end of the world?

Well, I'm afraid I have a little bit of bad news.

Experts from the slightly more reliable organization, NASA, have come forward with evidence that suggests an asteroid is plummeting towards Earth.

Okay... It's kind of plummeting towards Earth.

The Center for Near-Earth Object Studies (CNEOS), from Nasa’s Jet Propulsion Laboratory, said the celestial object, known as 2018VP1, is predicted to brush past the Earth this year.

The asteroid is approximately 6.5ft in diameter...

And was first observed at the Palomar Observatory in California back in November 2018.

There are 3 potential impact points...

But the eerie part is the date of these expected impacts.

2018VP1 is expected to come within close proximity to the Earth on November 2nd...

Just one day before the 2020 presidential elections.

Yep, this asteroid has evidently grown bored of American politics...

But don't panic just yet!

Experts have said the chances of it actually hitting the Earth and ending life as we know it are remarkably slim.

It has a 0.41 percent chance of hitting, data reports.

And if it was to hit the atmosphere, the asteroid is so small that it would only look really bright before breaking up into tiny pieces, WHIO reported.

So, it looks like the end of the world isn't quite upon us just yet.

Though, with how the rest of the year has been, it honestly wouldn't shock me if it was.

But there are some people out there who still believe the end is nigh.

Keep scrolling to read about the family of 7 who was found hiding out in a post-apocalyptical cellar...