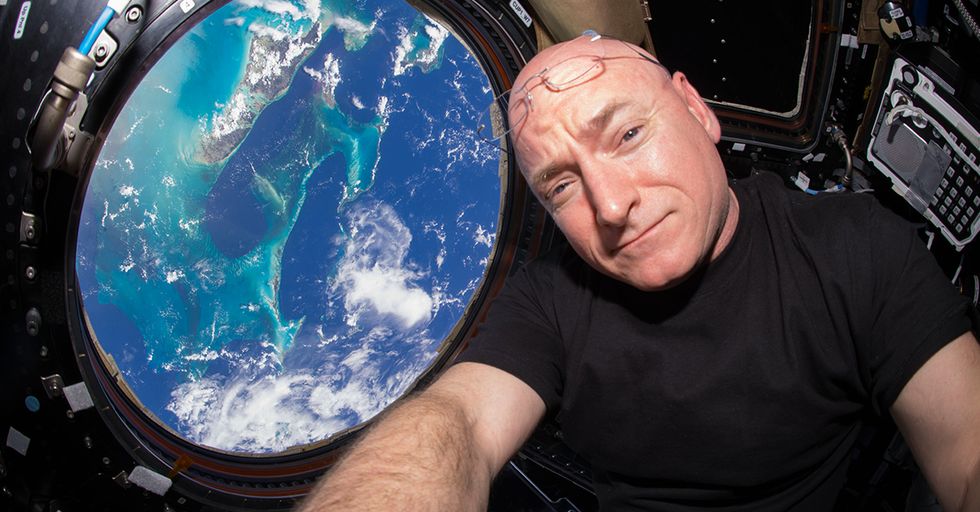 Astronaut Scott Kelly Answers Your 19 Most Burning Questions About Space

Well, it's one of those days, everybody.

Today is a day that we can celebrate the things that the Internet has made possible.

He's a retired astronaut who spent 340 consecutive days in space. He briefly held the record for total accumulated number of days spent in space by an American astronaut (he had 520; the current record-holder, Peggy Whitson has 534). Recently, Commander Kelly did a Reddit AMA. Here are some of the questions people asked Kelly about life in space, along with his fascinating answers.

Q: A lot of astronauts have talked about how seeing Earth from space changes their perspective on life on Earth. Did you have a similar experience your first time up?

A: After spending a long time in space you have a different perspective on our planet and what it provides us and how we're all in this thing called humanity together.

Q: How realistic is it to think about a Mars colony in the next 50 years?

A: Very realistic. But to quote my brother: "It's more about political science than rocket science."

Q: Does space have a smell? I once heard it described as burnt chocolate chip cookies.

Q: What was it like to sleep in space?

A: It's hard because your level of relaxation is the same whether you're trying to sleep or work. You're not any more comfortable when it's time to go to sleep. For example, on Earth, when you sit you're more comfortable because of gravity. You can't do that in space. When he was looking down on Earth from space, one place in particular stood out to Kelly...

Q: What was your favorite place on Earth to look down on from above?

A: The Bahamas because it's such a big, brilliant, blue spot on the planet.

Q: How soon do you predict space tourism will become a reality for the masses?

A: I think it will be a reality for some in a few years. I'm not sure about for the masses. I hope it develops along the same timeline as aviation did.

Q: Did the extended stay in space made the current events unfolding on Earth look meager?

A: It's sad that most of the news that comes from Earth is bad news. When I got back, everything looked better. Earth has a lot to offer.

Q: How much do you feel the effect of circadian disruption that comes along with the challenges of living and working in space?

A: We try to avoid changing our sleep schedule and we have window covers that can make the space station dark. Generally, at the end of the working day, I would dim the lights before turning them off. Now we have lights that can be adjusted for the purpose of helping with the circadian rhythm.

Q: What was the most uncomfortable thing about space?

A: The fluid in your body gets redistributed to your head, so you have this congested feeling for a year. Well, that sounds awful. But in case you want to experience it for yourself, Kelly has some advice for you...

Q: Being an astronaut has always been a dream of mine ever since childhood. How do you recommend I accomplish that?

A: NASA likes people who have done well in their jobs, but they also like people who have other skills like leadership, teamwork, ability to work with your hands. Find ways to get more of those skills if you don't already have them.

Q: Do you think the world, and humanity, would be different if everyone could spend a month or so in the ISS, looking down at the planet?

A: Absolutely. Looking down at the planet, you don't see political borders. You see one planet of which we all belong to. You see the fragility of our atmosphere that is everything protecting our beautiful Earth.

Q: Do you think it’s likely that we’re alone in the universe as intelligent life?

A: I think it's likely there is intelligent life in the universe. Although I'm not a big believer in the idea aliens have visited Earth.

Q: Does it offend you that people believe the Earth is flat or do you understand their point of view?

A: I think a lot of those flat-earthers don't believe the earth is flat. The risk is when you discount something that is clearly fact, it causes people to question other scientific facts and that can be dangerous.

Q: While in space, if you weren't busy with research, what would you do in your spare time?

A: Part of our job is research, part is taking care of the space station to live and work up there. It takes time. I didn't have an incredible amount of spare time, but when I did, I wrote, I read. Next up, Kelly talks about the habits that followed him back Earthside...

Q: Did you pick up any habits in space that you brought back to Earth?

A: When I go camping, my space habits are very present. Keep track of your stuff and your trash, don't lose anything, etc...

Q: What was your favorite project you worked on at NASA?

A: My favorite project was the year in space mission. I really liked working on an experiment that involved mice to help us learn how space affects the body.

Q: What are the top places you want to visit on Earth that you have seen from space?

A: Number 1: Tibet and the small lakes North of the Himalayas Number 2: Everywhere else.

Q: Back on Earth, do you ever try to put objects down mid-air, forgetting there's gravity?

A: After my first flight, I had a tendency to want to do that. I definitely tried to float out of bed to go to the bathroom.

Q: Star Wars or Star Trek (or something else)?

A: Star Wars. Always. There you have it, folks. Share these fascinating questions and answers with your favorite space enthusiast!