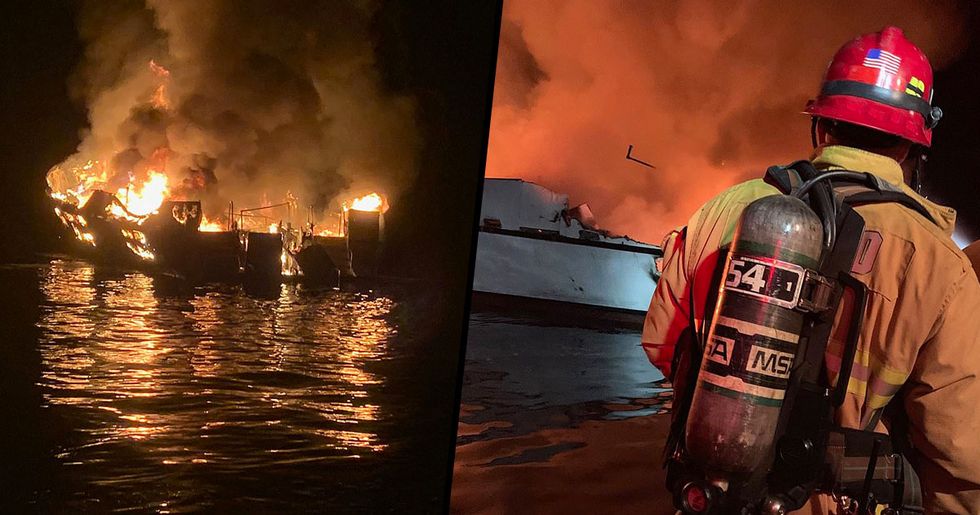 This year has already seen too many tragedies in the United States, such as numerous mass shootings and the recent events of Hurricane Dorian.

Another tragedy is hitting the headlines this week after a boat fire in California has taken the lives of at least twenty people and has left 14 others missing, despite vigorous efforts from the emergency services and rescue teams, according to recent reports.

Keep scrolling to find out more about this developing story...

A boat was out at sea during the early hours of Monday morning...

The boat was anchored carrying recreational divers near the shoreline of Santa Cruz Island in California.

The boat was a part of the Truth Aquatics Conception...

Truth Aquatics is a respected name in the diving world of America and it runs several boats off the Channel Islands that gives divers easy access to different locations.

He built the Conception in 1981 and it has since been a major part of his life and business. The Los Angeles Times reported that the Conception has hosted more than 450,000 divers and over 1 million dives in total.

Divers can spend up to 4 days onboard one of their vessels and take part in over-night diving activities in different locations.

It is believed that the majority of people on board the vessel were sleeping below the deck when a fire broke out.

A mayday call was issued...

The Daily Mail reported that the Coast Guard Sector Los Angeles-Long Beach received the mayday call just after 3.30 am. "There are thirty-three people on board the vessel on fire. They can't get off," the captain said in a chilling report. The rest of what he said in the mayday call was indistinguishable, however, it heard him say, "I can't breathe."

The flames completely engulfed the boat...

5 crew members were already awake when the fire broke out and it was reported that they jumped off the boat, although one of these members still remains unaccounted for.

At least 20 people have thus far been confirmed to have died.

The other 14 passengers who haven't been found were presumed dead late on Monday evening, according to latest reports.

A tragic ending to the lives of many...

According to The Guardian, Coast Guard official, Matthew Kroll, said that the first bodies recovered had signs consistent with drowning. The first four bodies recovered were identified as 2 adult males and 2 adult females, but authorities said that DNA tests needed to be carried out to identify them.

The crew who survived are completely distraught...

Shirley Hansen and her husband, Bob, were snapped awake as the fire began by the sound of other passengers pounding on the side of their sixty-foot fishing boat. Speaking to the Los Angeles Times, she spoke of how the surviving crew members paddled 200 yards to the Hansens' boat.

Learning the details of the passengers on board is truly harrowing.

"The crew was distraught, some wearing only underwear," she said. One man told the Hansens that his girlfriend was still below deck on the Conception. Another cried, explaining that they had celebrated 3 passengers’ birthdays hours earlier, including that of a seventeen-year-old girl who was on the diving trip with her parents.

The smoke was so thick that Hansen had to use an inhaler...

At least 15 bodies have been found from the dive boat that caught fire off the California coast, the LA Times repor… https://t.co/fcA7YAIspC
— CNN Breaking News (@CNN Breaking News)1567493311.0

The Hansens tried their best to help by handing out blankets and clothes to the crew, most of whom were just in their underwear.

Hansen said that 2 of the crew members got back into the water to try to find survivors...

But, sadly, they returned soon after empty-handed.

Kirsty Finstad is among those missing...

Described by her family as a "free spirit," Kirsty, forty-one, was an aspiring marine biologist and she is yet to be found amongst the wreckage.

Firefighters tackled the blaze for hours...

As the fire eventually dwindled, the vessel sank twenty meters offshore in more than fifteen meters of water.

What exactly caused the fire?

Because the boat was being used for a 3-day diving tour, there was a vast amount of fuel onboard. Coast Guard senior official, Aaron Bemis, spoke to CNN, explaining that the fire reignited itself due to the fuel kept onboard.

But it is still unknown as to how the blaze initially started...

"The fire was so intense that even after it was put out, we were not able to actually embark the vessel and look for survivors at that point," he said.

The search is still on for the missing few...

Monica Rochester, another Coast Guard official, said: "We will search all the way through the night and into the morning … We all should be prepared to move into the worst outcome."

She issued an official statement...

Recuse crews continue to search for the missing people and they are prepared to extend the search further along the coast.

This tragic turn of events is truly devastating, and we can do nothing but send out our hopes and prayers to the victims of this accident and the families who have lost their loved ones.