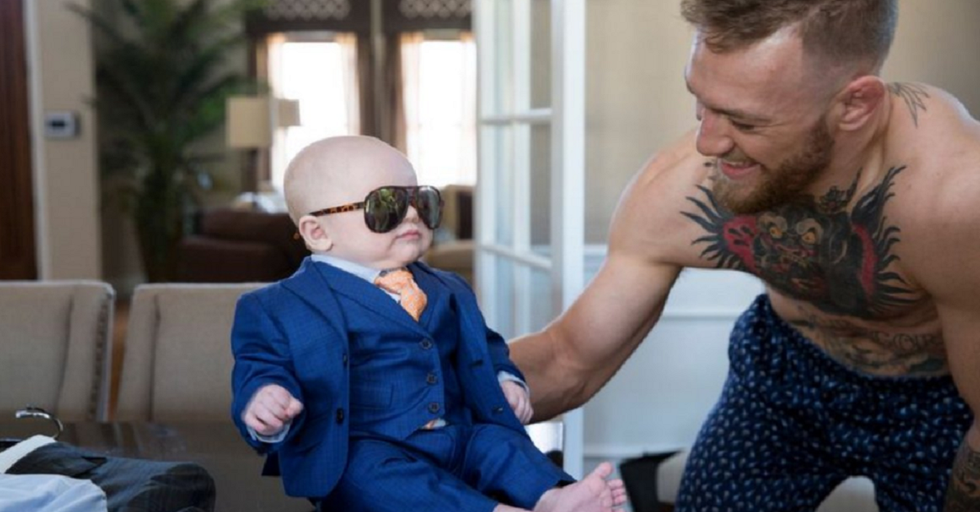 Unless you've somehow been living under several rocks at once, you've probably heard quite a bit about the Mayweather-McGregor fight happening this weekend.

Aside from the obvious spectacle of it all, there are a few unsuspecting reasons to care about this fight even if you're not a sports fan.

As you may or may not know, McGregor has recently become known for his suits.

Mostly because of that time he wore a suit with a certain explicit phrase on it during a press event.

Because of that, McGregor scored himself a deal with a suit company for a new line in 2018.

It's kind of baller to wear an "F*** You" suit and then get an endorsement deal because of it.

So what do you do when you get a new suit deal?

Get your three-month-old son his own suit of course.

Until you think about how much that suit is worth, at least.

But still, look how cute he is!

And the shades really seal the deal. I'm loving it, and so was Twitter.

Everyone conceded that Baby McGregor is already way cooler than they will ever be.

I think the odds are higher than 98% there, bud.

But there is one thought that I can't get out of my head when I look at him...

Yep, he looks like Mini-Me from the Austin Powers franchise. I'm glad to know I wasn't alone on that.

Baby McGregor isn't the only unusual reason to care about this fight.

Turns out the belt they're fighting for (oh yeah, if you're not familiar with this sport, people fight for a belt) is a bit unique as well.

Like everything else about this fight, even the belt has to be extremely lavish.

Of course it's made out of alligator skin, because why not?

It looks as absolutely insane as you'd imagine it.

There is an awful lot going on there. Let's break it down.

The first thing you notice, besides maybe the alligator skin, is the weird circle of flags in the middle.

Not to mention the over three pounds of gold on the front. Three pounds!

In a fight where the prize purse is said to be nearly $400 million USD, why not get the craziest, most expensive belt you can?

McGregor himself tweeted about the belt, and took another shot at Mayweather while he did it.

But he would need a pretty large belt collection for all those suits he has.

"The money belt" reminded certain segment of wrestling fans of a different belt.

For the kids, Ted DiBiase was a wrestler in the 80's and 90's who had a fancy gold belt made out of dollar signs, and it was called "the million dollar belt." They should've brought that back for this fight.

Still, I think the Mayweather-McGregor belt is plenty fancy.

And hey, if McGregor somehow wins he can have his son use the belt for his new suit! Will you be watching the big fight this weekend?