Even if you're a germaphobe, give everything a touch or bump. | 22 Words 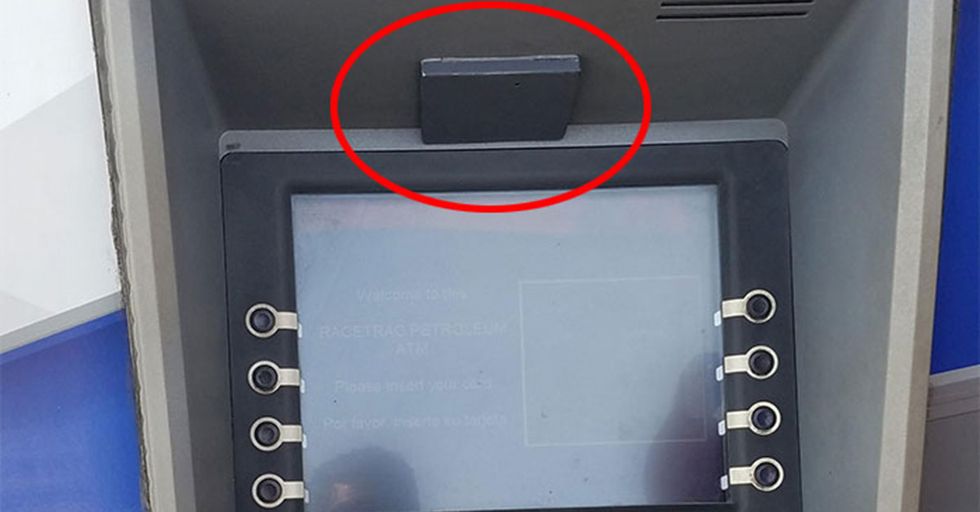 ATM Scams Aren't Obvious, But You Can Spot Them If You Know What To Look For

We take ATMs for granted as part of our daily life, but as criminals get more sophisticated, they're more and more inclined to use our comfort around the machines to steal our money and personal information. Fortunately, you can be on the lookout for these scams. These pics via Bored Panda show what you should be on the lookout for below.

It sounds funny, but as this police officer shows us, feeling the machine can indicate whether or not there's a facade over the front that's stealing your info. Pretty crazy.

Wiggle just the card reader, too.

A fake one can be slipped over the real one, allowing whoever installed it direct access to your card's info. If the card reader looks loose or "off," then move on.

Keep an eye out for hidden cameras.

As you might imagine, they can get pretty small, but do your best. The cameras can steal your PIN, allowing thieves access to everything should they obtain your account info.

If you need a refresher on how sophisticated these devices can get, look no further than these four photos. If something feels weird, don't risk it. Just find another machine.

You might not know every component of an ATM, but be on the lookout for janky additions to the complete housing. They could contain cameras and recording devices as this one does.

These are the most frustrating. Criminals just put a barrier over the cash dispenser. It seems like your money hasn't been dispensed, but when you leave, they'll pull it out and keep it for themselves.

Even if you're a germaphobe, give everything a touch or bump.

If ANYTHING feels loose, then you'll want to leave and report the machine. Do it for the next people who come along who might not be so aware of things.

I'm not sure where the odd name comes from, but this device keeps your card from coming back, meaning it belongs to the criminals after you put it in.

You're always being watched by the ATM, but it's not always for security reasons. They're trying to get your number. Don't let them.

As this component gets the data, it texts it to a cell phone, giving criminals all they need to take what's yours. Yet again, a good shake should reveal what's real and what's not.