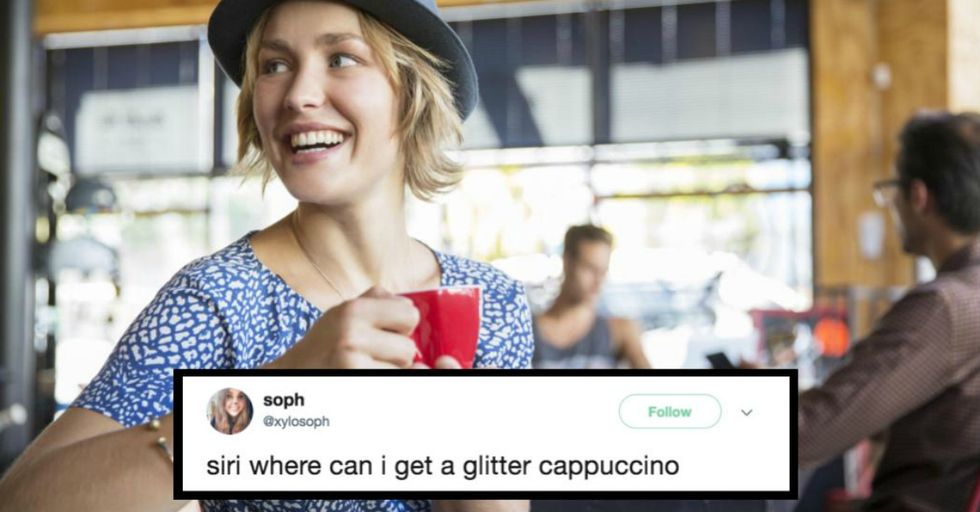 Great news for all the sparkle-obsessed people out there! Your dreams of eating glitter have finally come true.

Glittery cappuccinos are officially a thing, and Instagram will never be the same.

Would you drink this thing?

It's the one thing that gets us out of bed in the morning and makes it possible for us to interact with other human beings without turning into a murderous troll. Lately, in a disgusting display of coffee sacrilege, ridiculous concoctions masquerading as coffee have been popping up across social media.

Touted as a "color-changing" and "flavor-changing" drink, the Uni Frapp launched for a limited time in April of 2017 after massive anticipation. The description of the enchanting drink on Starbucks.com is nothing short of magical. "The elusive unicorn from medieval legend has been making a comeback," it says.

"Once only found in enchanted forests, unicorns have been popping up in social media with shimmering unicorn-themed food and drinks."

"Now Starbucks is taking the trend to a new level with its first Unicorn Frappuccino® blended beverage, available starting Wednesday, April 19, through Sunday, April 23, while supplies last." "The Unicorn Frappuccino blended crème is made with a sweet dusting of pink powder, blended into a crème Frappuccino with mango syrup and layered with a pleasantly sour blue drizzle. It is finished with vanilla whipped cream and a sprinkle of sweet pink and sour blue powder topping." Okay, but is there coffee in it? We still don't know.

And then there was this brilliant girl who trolled everyone into thinking she'd discovered the next trendy coffee drink.

It really makes you wonder how many people made a complete fool of themselves asking for a frappajappajooza off the "secret menu" with a smug look on their face. Also, we're guessing this whole "secret menu" thing has baristas everywhere wanting to throw in the apron.

It wasn't long before the "fake Frapp" trend caught on.

We're not gonna lie, a Mango Frappajappajooza does sound pretty good. So just what does a glitter cappuccino look like, you may ask?

Glitter coffee is the only cup of coffee that makes your Monday morning more bearable and lets you shine all day.… https://t.co/zWq6QUXIM3
— Colourful Rebel (@Colourful Rebel)1509369107.0

It basically resembles the aftermath of a unicorn exploding all over a delicious and unassuming cappuccino. And people online have a lot of feelings about it.

Some users are so here for the new sparkly drink.

May your Saturday night shine and sparkle just as bright as our Gold and Diamond Cappuccino! #CoffeeByDiBella #CBD… https://t.co/g72kE48awL
— Coffee By Di Bella (@Coffee By Di Bella)1509804479.0

"The perfect wake-up drink to make you shine all day <3" said a Twitter user named Suzie Sparkles. With a name like that, though, we would have only been surprised if she didn't like it.

"I LOVE GLITTER!" said one user who somehow managed to make her font literally sparkle.

"Where can I get it" said another who couldn't even be bothered to include a question mark in her quest to find glitter-filled coffee. Not everyone was as onboard with the idea, however.

An outraged user called Ultimate Predator responded, "I love my Coffee but.... no glitter. Nooooooooo."

"No one loves shit that sparkles more than I do but I don’t want glitter in my coffee, get outta here with that shit," said seriously ticked-off user SarahSweat. Speaking of... um..."stuff" that sparkles...

Twitter user Frank dropped this somewhat disturbing truth bomb that we all really needed to hear.

"BEWARE it doesn't always dissolve in your system, some of it may come out the other end glittering like a mad fairy, you just think about that." We'll never NOT be thinking about this now, Frank.

To make things even more uncomfortable, this Australian coffee shop described their glittery creations in a very bizarre way.

"Looks like a fairy just let off wind at Melbourne again," says the caption to multiple photos of gold glitter-encrusted beverages. Since we're pretty sure we know what "let off wind" means, we're gonna reiterate our initial stance of "NO" on this trend.