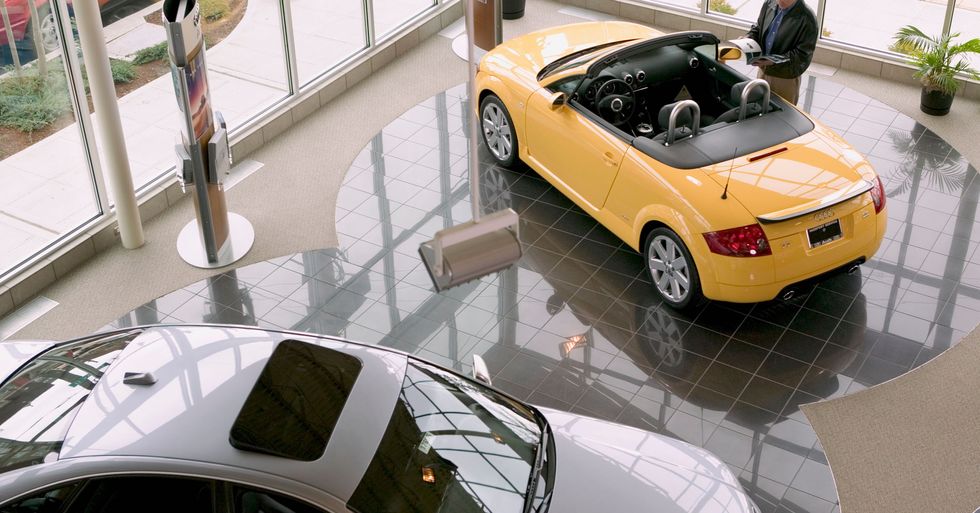 Another day, another massive blunder by a huge conglomerate. It seems the brands will just never learn!

The latest advert to have the internet rallying around together is none other than Audi's. The car company forced to apologize after their new vehicle advertisement left viewers feeling more than just uncomfortable...

Keep scrolling for the reasoning behind their visual choices as well as the image that caused the controversy.

Advertising is an important part of business.

But in this day and age, it seems they're also basically an inescapable part of all of life.

To many, ads are just an annoyance.

Feeling like you're constantly being bombarded with messages to buy buy buy can be a little exhausting, can't it?

And boy, can adverts be irritating.

The idea of a successful advert is to grab attention and to stay in your head - so annoying can be rather lucrative.

But there's an even more pernicious trend in the ad industry.

In order to grab attention (and thus customers) amidst the constant noise, ads are becoming increasingly "outrageous." And by outrageous, we mean offensive.

And I know what you're thinking... It's probably not even that offensive...

But this one has really left a sour taste in everyone's mouths as the ad contained some very disturbing "innuendos" which led to it being removed.

The brand behind the idea is none other than the vehicle manufacturer, Audi.

The popular car brand has been on the receiving end of intense backlash after they released what has been described as a "tasteless" and "life-threatening" image of a girl eating a banana in front of a car.

No, we're not joking.

She was actually eating a banana.

For those of you that might not be aware, there have been sexual connotations tied to the fruit.

Often people associate the act of eating a banana as a phallic symbol and the sexual imagery has also been used similarly within TV and film so it's not like it was a secret.

Though it might not be the first thing to come into some of our minds...

I can understand why people were annoyed that it was there in the first place, especially given the circumstances of the current "sex trafficking" scandal that is dominating social media.

Not to mention, there are lots of social media accounts dedicated to posting videos of people eating bananas...

And it's very disturbing, to say the least.

And just to make things worse, the caption with the post read:

As if someone on the creative team didn't put two and two together and stop this.

I mean, I find it hard to believe that an entire team of professionals sat down and collectively decided that it was alright to put a child in front of a car and make her eat a banana while they filmed it.

I refuse to believe it.

They invested thousands into an ad that had obvious inappropriate innuendos and thought, "yeah, let's put that out for the whole world to see."

We know that "cancel culture" can take things a little far sometimes, but this one deserves it.

This ad is well and truly canceled.

And it seems like a lot of other people agree...

How did the photographer not pick up on this?

Others had a more passionate opinion on the matter...

I mean, it is pretty uncomfortable.

Here's the thing, a lot of people choose not to get it because it shouldn't be wrong.

A child eating a banana should not have to come across offensive or strange, but children are abused in different ways using sexual imagery. This one seems to be very unintentional, but that doesn't mean others aren't.

And it's not about people like us that don't immediately associate the picture to sexual symbols...

It's about those that see it on the other side of the screen and do. That's who we are protecting these children from. You don't know what a person behind the screen is thinking, so it's better to stray away from these connotations completely.

Others picked up on another thing...

What is the actual message about the car? There wasn't really much going on, to be honest. The creative flow must have been low that day.

Due to all the backlash, Audi has tried to explain themselves on their Twitter.

They started off the message emphasizing that they care for children...

We hoped we could convey these messages, showing that even for the weakest traffic participants it is possible to r… https://t.co/zof3NZbboU
— Audi (@Audi)1596452682.0

Here, they tried to explain the original intention behind the imagery...

We sincerely apologize for this insensitive image and ensure that it will not be used in future. We will also immed… https://t.co/VrV7irY1lT
— Audi (@Audi)1596452683.0

They referred to the image as "insensitive" and explained that it will not be used in the future. (But it's still up on their socials... Yikes!)

Here's the full image for you to see:

Keep scrolling to see another problematic ad that told "dark skin people" not to apply...