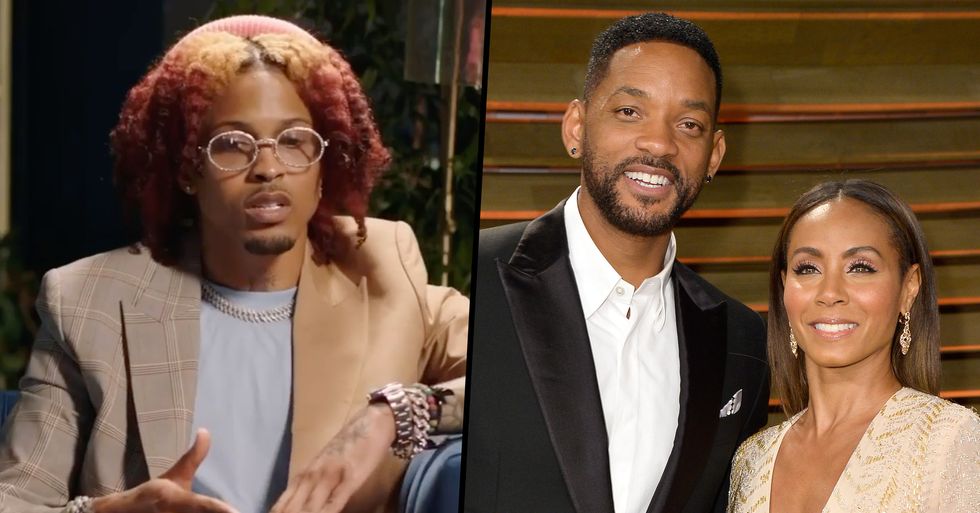 If you thought all the Jada Pinkett Smith affair drama was over, you're sadly mistaken.

After she admitted the whole thing, the guy in question - August Alsina - has finally spoken out...

Jada Pinkett Smith has been thrown into the spotlight these past couple of weeks.

For years now, rumors of infidelity between her and her husband, Will Smith, have been rife... But now, a whole new rumor has emerged.

New reports have been alleging eye-opening new details about the pair's marriage...

And it seems the situation is continuing to develop.

Jada was only nineteen when she auditioned to play the role of Will's girlfriend in the hit sitcom, Fresh Prince of Bel-Air.

However, her audition wasn't successful, as casting thought she was too short.

At 6'2, Will towers over Jada, who is only 5'. But from the audition, Will and Jada built a friendship which soon turned into a romance.

Though Will was married to Sheree Fletcher at the time when they met...

In an interview with Access, Jada admitted that Will was still technically married when they started dating. "He was 'div'," she said. "The 'orced' hadn't happened yet." Will and Sheree divorced in 1995 and they continued to share custody of their son, Trey.

And it was in 1995 when the pair went public with their relationship.

Upon the breakdown of his marriage, Will had asked Jada if she was "seeing anyone," and her response was "no." "Cool, you’re seeing me now," Smith had smoothly told her.

It was a whirlwind couple of years...

And, just 2 years later in 1997, Will and Jada had tied the knot in a private ceremony at the Cloisters Mansion in Jada's hometown of Baltimore.

Jaden, who is twenty-one, and Willow, who is nineteen. Both Jaden and Willow have embarked on careers as musicians since they were teenagers and they're now proving to be very popular - particularly in the hip-hop and rap scene.

For years now, people have been speculating the loyalty between the pair.

In an interview with HuffPost Live, she had said this:

"I’ve always told Will, 'You can do whatever you want as long as you can look at yourself in the mirror and be okay. Because, at the end of the day, Will is his own man. I’m here as his partner, but he is his own man. He has to decide who he wants to be and that's not for me to do for him. Or vice versa."

However, she quickly put these rumors to bed.

Taking to Facebook shortly after the interview, Jada opened her post with the question, "Open marriage?" She then explained: "The statement I made in regard to, 'Will can do whatever he wants,' has illuminated the need to discuss the relationship between trust and love and how they co-exist."

But, just a few years after that, comments Will had made about his wife reignited the split rumors.

On TIDAL's Rap Radar podcast in 2018, Will had said: "We don't even say we're married anymore. We refer to ourselves as 'life partners,' where you get into that space where you realize you are literally with somebody for the rest of your life. There are no deal-breakers. There's nothing she could do - ever - nothing that would break our relationship."

As you can see, it's been a peculiar relationship journey, to say the least.

But now, a whole new spanner has been thrown into the works.

He had hinted strongly that he had engaged in a consensual relationship with Jada in his song "Nunya."

And, to make this story even more scandalous...

He alleged that the relationship, which spanned over several years, "was approved by her husband Will." What?

It all sounded very civilized...

In an interview with The Breakfast Club’s Angela Yee, August said: "I actually sat down with Will and had a conversation. Due to the transformation from their marriage to their life partnership that they spoken on several times, and not involving romanticism, he gave me his blessing."

The singer then expressed his love for Jada...

"I totally gave myself to that relationship for years of my life. I truly and really, really deeply loved, and have a ton of love for her. I devoted myself to it, I gave my full self to it. So much so to the point that I can die right now and be OK with knowing that I truly gave myself to somebody," he said.

"I really loved the person that I experienced that [with] and know what [that feels] like – if some people never get that in this lifetime."

It sounded like August loved Jada more than she perhaps loved him...

August then addressed the Smith family...

"I love those people literally like my family. I don’t have a bad thing to say about them. They are beautiful people."

Even though August is adamant about his relationship with Jada...

After the rumors emerged, Jada's rep told Page Six that the singer's claims are "absolutely not true," and that the entire thing has been made up.

The actress took to Twitter a few days ago to write a cryptic message, and it got everyone talking.

Here's what she wrote.

"There’s some healing that needs to happen…so I’m bringing myself to The Red Table."

The full Smith family has appeared on Red Table Talk several times before...

So, upon hearing the news of Jada's decision to bring herself to the table...

People have been going wild.

It was always going to be a good one.

Jada's Red Table is known for it's brutal and raw honesty... And this episode was no exception.

She confessed it all.

During the confession, Jada admitted she did have an affair with singer August Alsina while married to Will Smith. She said: "And it all started with him just needing some help, me wanting to help his health, his mental state. "The outpouring for him from our family was initially about his health. We found all those different resources to help pull him through and from there you and I were going through a very difficult time."

They met 4 years ago.

Jada added that she first met August 4 years ago, when she and Will were going through a "difficult time" and had "basically broken up." Will himself admitted: "I was done with you." before asking her: "And then what did you do?" Jada then admitted she got into a different kind of relationship with August.

"It was a relationship, absolutely," she confessed. "I was in a lot of pain, and I was very broken. In the process of that relationship I definitely realized that you can't find happiness outside yourself. "I just wanted to feel good, It had been so long since I felt good... and it was really a joy to just help heal somebody."

"For me, this was years ago. We have really gotten to that new place of unconditional love."

But, if you thought all the drama was over...

In a new interview with Vulture, August reacted to the episode, admitting he's only seen a few short clips on Instagram.

He went on to say that he agrees with Jada's use of the word "entanglement," to describe their relationship.

"I don’t know why that word is such an issue. I would agree," he said. "If you look up the definition of 'entanglement,' it is a complex and difficult relationship. It was exactly that. I think it's just the language that probably stuck out to people. But I definitely have to agree with it being an entanglement. It definitely was something complicated, a complicated dynamic."

He also revealed why he decided to break the news of his relationship with Jada in the first place...

August admitted there was already a "lot of chatter" about the situation already out there and that he was beginning to get a reputation for being "this problematic guy who was super reckless like I'm pushing up on someone's wife."

"I didn't really like that. I didn't like the sound of that, especially when it wasn't the truth," he continued, saying that that perception also "started to f**k with my partnerships and business relationships and money."

He felt it was a necessary thing to do.

"I didn't like how that started to tamper with my life and finances. I felt it necessary to get it out off of my spirit and clear the air."

Now that everything regarding the situation is out there...

He said he doesn't "have an issue with anybody. "I love everybody. I love all of them. They've been my family, and there's a lot of history there."

He also says he doesn't have regrets about the relationship.

"[It] helped me to operate and access my higher self," he said. "I don't regret it at all because I know that on this planet, there is not much harmony, and there is not much love, so when you’re actually given love, real love that you’ve never experienced, it is a gift." For more about Will and Jada's relationship, scroll on to find out how Jada confronted her husband about his alcohol use...