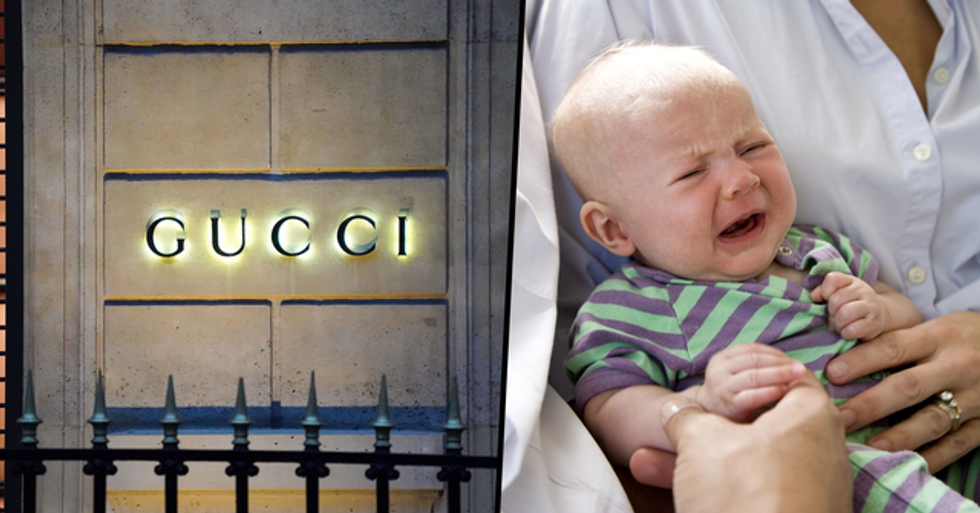 A woman has shared her dismay over her sister-in-law's eyeopening demands after her baby threw up on her...

There's nothing quite like a bit of baby vomit to ruin a family get-together, is there?

We've all been there - the day is going splendidly until someone's baby decides to throw up all over a distant relative.

It will always be an awkward situation...

But, for most of us, it can be laughed off with a bit of washing-up liquid and air freshener. Problem solved!

However, not all families take too well to these little hiccups...

And now, one woman has shared her own shocking story of how her sister-in-law reacted when her baby vomitted on her.

Disclaimer: She didn't take it well.

The woman took to Reddit to seek advice on how to deal with this hairy situation, and she began by explaining how her sister-in-law has been struggling to conceive herself, so, therefore, loves spending time with her niece, Dany.

"My sister-in-law has been trying to have a baby for a while now, so she got very emotional upon seeing Dany and would not let anyone else touch her."

The woman was completely fine with this...

And, glad of the break, allowed her sister-in-law to take control and look after Dany for a while.

But then, the new mom grew a little concerned with how her in-law was holding the baby.

She noticed how Dany was being held a little too tightly, so she pointed it out: "I tell her this and she says, 'just because I don't have a child doesn't mean that I don't know how to hold one.'"

And, even when her husband intervened...

The sister-in-law remained adamant that she wasn't holding the baby too tightly, and that the youngster "will be fine" and that it "would be obvious if she was uncomfortable."

It was here that disaster struck.

"As if on cue, Dany puked all over her."

Yep, it turns out that Dany was being held too tightly, after all.

But I know what you're all thinking... A little bit of baby sick never hurt anyone, did it?

Well, it turns out that this little bit of vomit was incredibly detrimental...

Because the aunt was wearing a very expensive Gucci top.

Now, most of you will be aware of Gucci...

And most of you will definitely know that their clothing and fashion accessories are not cheap.

Just a Gucci purse can set someone back hundreds of dollars...

So, of course, things turned a little sour.

She wrote: "Sister-in-law then looks at her shirt and goes, 'Oh no. This is Gucci. Your daughter ruined my Gucci shirt.'"

The embarrassed mom apologized profusely to her in-law...

But did explain how it wasn't the baby's fault. "[I] apologized and said that Dany didn't do it on purpose and that we can get it cleaned for her."

But the furious woman had other ideas.

Rather than accept the apology and move on, she instead demanded that her in-law pays for a new Gucci top.

Understandably, the new mom wasn't having any of this.

"I told her that nah, we're not giving her any money and that we warned her twice she was holding the baby wrong but she chose not to listen."

Even her husband agreed.

"[My] husband said that his sister shouldn't have worn such an expensive shirt if she wasn't ready for it to be ruined since she knew she was going to be with a baby all day."

Since the incident, the in-law has continued to blame them for inviting her to see the baby...

And even went on to tell other family members of how she was "badly treated" by the new parents.

And the internet was firm with their opinion on the matter...

This was entirely the in-law's fault! All the comments agreed she wasn't the one being "an a**hole" with many questioning the aunt's decision to wear the top in the first place, and others telling her to simply wash the spoiled garment.

Should the in-law grow up and wash her Gucci top? Or should the new parents fork out for a brand new shirt? For more family dramas, keep scrolling to read about the woman who's controversial choice of baby name "tore apart" her entire family...