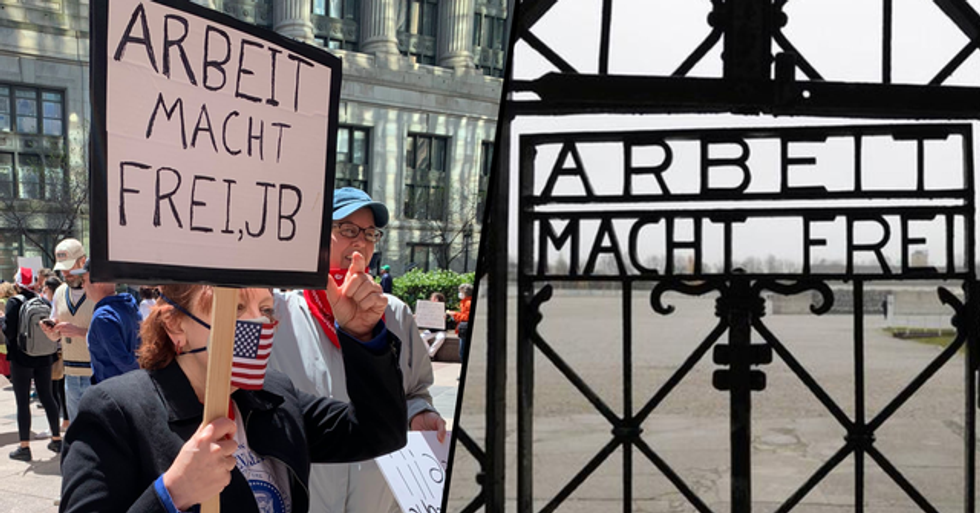 A woman has sparked outrage after she was spotted at an anti-lockdown protest brandishing a sign that bared a slogan from Auschwitz, the notorious concentration camp that claimed the lives of millions of Jews and other minority groups during the second world war.

The photo of the protestor has quickly gone viral online, with the official Auschwitz Memorial page even weighing in on the controversial sign.

Keep scrolling for the full story, and to hear the woman's shocking excuse for using the sinister slogan...

The Holocaust was one of the most monstrous atrocities to ever happen in human history.

Over 6 million Jewish people were mercilessly murdered during the 1930s and 40s when Nazi Germany invaded and occupied many parts of Europe.

The Nazis made it their mission to "exterminate" the Jews.

After coming into power in 1933, the nefarious dictator, Adolf Hitler, imposed a series of sick and twisted ideologies upon the rest of Germany.

He believed that Jews were an inferior race.

And, ultimately, a threat to the German race, their purity, and their community.

He spread these messages across the nation...

It was after the German invasion of Poland, and the declaration of WW2 in 1939...

That the Nazis started to officially deport Jewish people from all across Europe to parts of Poland, where they created ghettos to separate them from the rest of the population.

And, when the ghettos became too over-crowded...

The Jewish people were then transported to the concentration camps that had been built all across Europe.

The concentration camps, or death camps, as they quickly became known as, were truly horrific.

Millions of innocent people suffered at the hands of the notorious SS guards in these camps, and they were forced to endure grueling labor, dire living conditions, and painfully sparse food rations.

It was in these camps were most of the Holocaust victims perished.

Many starved to death, while others died of diseases such as typhus and pneumonia.

And for those who managed to survive these harsh conditions and constant hunger...

The gas chambers were what awaited. It was here where hordes of prisoners, under the illusion that they were simply going for a shower, were locked into a brick chamber and suffocated with the deadly Zyklon B gas.

Millions of jews met the fate of the deadly gas chambers.

And their bodies went on to be buried in mass graves, some of which carried thousands of corpses at a time.

And the largest of these death camps was Auschwitz-Birkenau.

Located in Krakow, Poland, Auschwitz played home to one of the biggest genocides in human history, with the German SS systematically killing at least 960,000 of the 1.3 million Jews inside the camp.

The camp was eventually liberated on 27th January 1945...

Thus putting an end to the atrocities experienced at the hands of the Nazis.

The remains of Auschwitz still stand, serving as a poignant reminder of the horrors that occurred all those years ago.

Most people use the remains of the camp as an opportunity to remember those who lost their lives...

But, sadly, there are others who use it for slightly more disrespectful reasons.

An anti-lockdown protestor has recently been criticized for her homemade sign that depicted a hateful slogan from Auschwitz.

The woman, who is yet to be formally identified, was seen at a protest in Chicago on Friday brandishing a sign that had "Arbeit Macht Frei, JB" scrawled across it.

Arbeit Macht Frei is the famous saying brandished across the gates of Auschwitz...

And, once translated from German, reads "work will set you free", which was the Nazis' sarcastic and sinister way of tormenting the prisoners as they entered the camp.

So, obviously, these words have no place anywhere in modern society...

@AuschwitzMuseum I’m so embarrassed and ashamed to see these words being used in my country.
— Michael (@Michael)1588400715.0

Especially at a protest against stay-at-home orders.

Or so you'd think.

The phrase holds sickening connotations, so the sight of this woman, standing valiantly with an American flag wrapped across her face while brandishing the awful saying has understandably sparked a whole lot of outrage.

And many have even been going as far as labeling her as a Nazi for even thinking to use the phrase in her protest.

And for those questioning the credibility of the photo...

Here is a video of the disgraced woman with her sign, just so you can all see that it hasn't been photoshopped or exaggerated in any way.

As for her excuse?

Well, Dennis Kosuth, who took the photo of the woman, said that she attempted to defend her sign, as "she assured those that she was not a Nazi, and stated, 'I have Jewish friends.'"

Dennis, who is a nurse, was attending the protest as a counter-protestor...

And, despite being taunted by many of the protestors, it was the sight of this sign that truly boiled his blood. "My approach was to ignore people," he told BuzzFeed News in a phone interview on Saturday, "but then I saw her sign and said, 'That's pretty messed up. Why would you bring that here?'"

"How dare you compare the Holocaust to a stay at home order?"

Dennis has lost a friend to the ongoing medical pandemic, so he decided to share his photo of the woman to Twitter to publicly shame and condemn her. And it worked! His photo has now been viewed over 50,000 times, with thousands more commenting and condemning the woman and her grotesque sign.

And now, the official Auschwitz memorial page has spoken out on the incident...

"Arbeit macht frei" was a false, cynical illusion the SS gave to prisoners of #Auschwitz. Those words became one of… https://t.co/IkjLnT0TBk
— Auschwitz Memorial (@Auschwitz Memorial)1588395048.0

And they have completely slammed the woman and her sign. They wrote: "Arbeit Macht Frei" was a false, cynical illusion the SS gave to prisoners of #Auschwitz. Those words became one of the icons of human hatred. It's painful to see this symbol instrumentalized & used again to spread hate. It's a symptom of moral & intellectual degeneration."

Let's only hope that the woman has now seen the error in her ways...

The horrors of the events of Auschwitz are completely unspeakable, and the infamous saying from its gates should never be brandished around in vain. For more on the ongoing medical pandemic, keep scrolling to read about the holocaust survivor who has slammed those complaining about the lockdown regulations...