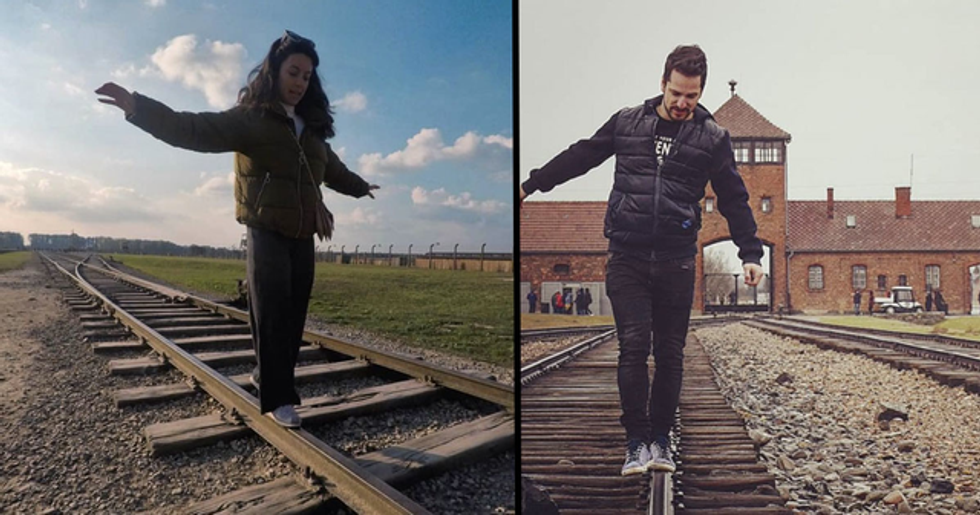 Social media is one of the most interesting phenomena of today. It seems that for many of us, a moment not captured and shared ends up lost forever. While this isn't such an issue when it comes to most aspects of our daily lives, though, it's starting to have a strange, unforeseen consequence.

Because occasionally, people visit places of such social and historical significance that putting themselves into the story, by doing things such as taking selfies and vlogging, can start to seem a little ill-judged. But, because of our collective social media obsession, it seems irresistible to try to get that perfect snapshot.

Such is the problem facing the Auschwitz Memorial. And after a slew of people began posing in inappropriate, ignorant ways to get that perfect Instagram shot, the historical site was forced the speak out. Writing on their official Twitter account, they shared a message for those who seem to think that their social media presence is more important than respecting the events of the past.

Social media is taking over the world.

It's one of the biggest social changes that we've seen in our lifetime. People are no longer ever truly alone - instead, using phones, we always feel like we're in a crowd of people.

Many are worried about the impacts that this may have.

The irresistible need to share even the most mundane aspects of our daily lives is a fairly new phenomenon, and many people are curious (and concerned) as to why social media has become such a big deal.

The app was launched in 2010 and had with fairly humble beginnings. It has since been purchased by Facebook and has become one of the biggest social media platforms in the world.

There's something oddly addictive about it.

The photos that we post receive "likes", and it often feels like a sort of validation in the unkind, unfriendly world that we live in. For many, Instagram has become a very real addiction.

A lot of the content you'll find there can be fairly same-y.

The app is designed to work as a photo diary, but for most people, it serves as a platform wherein others can get a heavily-edited glimpse into their day-to-day lives - but only the most glamorous parts, of course. Some view this editing-of-real-life as being heavily problematic.

Because, for all of us, not every part of life is "Instagrammable".

If we believe what we see on our feeds, then we're looking at a strangely distorted view of the world. This altering-of-reality is something that many sociologists are concerned about in terms of our future.

But, ultimately, it's probably pretty harmless.

While much Instagram content can make us feel a little bit "less than," it doesn't seem to have any obviously harmful implications.

But what about those who'll do anything for a like?

The rush of a popular Instagram post is heavily sought after - and for some people, that means they'll stop at nothing to get that perfect, "likeable" picture.

Even if that means posting something a little more distasteful.

"Doing it for the likes" is a real social phenomenon - and although it's frequently joked about, it could have some quite worrying implications. It seems that some prize their social-media-lives over the real world around them.

This becomes hugely apparent in the case of sites that bare considerable historical significance.

Like, for example, the Auschwitz Memorial. The complex of concentration camps was built by Nazi Germany in Poland during the Holocaust and serves as a sober reminder of the atrocities sadly committed there.

Auschwitz is the site of one of the darkest moments in history.

At least 1.1 million were killed at Auschwitz, under the reign of Nazi Germany. The entire camp has a haunting, heartbreaking feel to it, even now.

One particularly horrific sight to see there is the railway tracks.

It was on those tracks that trainloads of prisoners arrived at the camp with everything taken away from them and no idea what was going to happen next.

It can be hard to think of an appropriate response to a sight such as Auschwitz.

When faced with such intense and enormous tragedy, it can seem impossible to think of an adequate way to acknowledge it.

But some visitors have been doing something that most would never dream of doing.

They've been taking their visit to Auschwitz as an opportunity to pose for that perfect Instagram shot. The railways, in particular, have been the site of a slew of Instagram posts.

So many, in fact, that the site has been forced to speak out.

The Auschwitz-Birkenau Memorial and Museum have issued a reminder to visitors that these kinds of photos are, at best, unnecessary and inappropriate, and at worst, hugely disrespectful.

Sharing images of tourists using the railways as a cute photo opportunity, the official account appealed to visitors to stop using Auschwitz as an Instagram backdrop.

And people were pretty appalled by the images.

When you look at these photos and think about that which the camp represents, it's hard not to have an immediate, emotional reaction.

Some view it as a lack of respect for history.

With constant access to cameras and social media apps through our phones, the importance of simply seeing, and remembering something for what it was seems to have fallen by the wayside.

Some see this problem as symptomatic.

It does work on an allegorical level, offering us an insight into how disconnected social media is making us from the real world. The more we share online, the less we're actually taking in real life.

Some even viewed it as a sign of hopelessness.

After more and more tourists started posing for Instagram photos on the train tracks at The Auschwitz Memorial and… https://t.co/bdgLfjvLfB
— Mel Tansill (@Mel Tansill)1553123261.0

The fact that a concentration camp has to ask visitors to stop using its imagery for social media likes does sound a little bit like the plot line of a dystopian novel, it's true.

Some had a very visceral reaction.

It's easy to get caught up in the horrors of what these images could represent in spite of the fact that it's highly doubtful that any of these young people actually meant any harm by what they were doing.

Many think that the camera removes us from our surroundings.

@arch2tch @AuschwitzMuseum What have we become? Why even bother going to Auschwitz if you're going to behave like y… https://t.co/JPVNBkwxOQ
— Francesca 💙 🇪🇺 (@Francesca 💙 🇪🇺)1553087452.0

Some believe that it's better to quietly experience Auschwitz and avoid trying to capture it on social media. Being present in the moment may help some to better understand and try to deal with that which they're seeing.

However, some took a more balanced view.

@AuschwitzMuseum @RevMelanieNOLA Not everyone is at the same place in their journey towards maturity and understand… https://t.co/88WFi6JHwQ
— Gseriously? 🤦🏼‍♀️ (@Gseriously? 🤦🏼‍♀️)1553088594.0

It's true that these people were most likely not trying to disrespect the historical implications of the site. They probably didn't know how to deal with what they were seeing, and responded in a way that felt comfortable, and perhaps comforting, to them.

It's problematic to try to dictate any response to grief.

Many think that actively trying to remain totally solemn and sad at Auschwitz stops the experience from being intrinsically human. Some view the move towards lightheartedness as a positive step for society.

The official account was quick to point this out.

They were not suggesting that visitors needed to stop posting images but simply that these sorts of playful, removed-from-context photographs were not appropriate to their setting. The account shared some images they loved.

Nonetheless, some took a didactic approach.

Some had the view that any photography at such a haunting, horrific site was inherently problematic, and urged the Auschwitz Memorial to consider a blanket ban.

However, this isn't what the site wanted.

The official account claimed that photography was an important aspect of remembrance - and it was simply a specific style of self-centred photos that they wanted to inhibit.

A general rule of thumb seems to be to look at the focus of the image.

If it's a photograph that represents Auschwitz itself, then it is considered to show respect and deference to the history of the site. If it's an image that places the visitor, front and center, it's likely to be considered problematic.

As for posing around these sites?

If you're not sure about whether a photo opportunity is respectful or not, it's far better to err on the side of caution. A visit to Auschwitz or places like it should be made for the experience itself - not for the pictures that you could potentially snap.

Nonetheless, responding with anger is unhelpful.

The intention behind these images was not to hurt - and they're more a symbol of ignorance than of cruelty. The only way that we can become better is to learn, and hopefully this story will teach a valuable lesson.