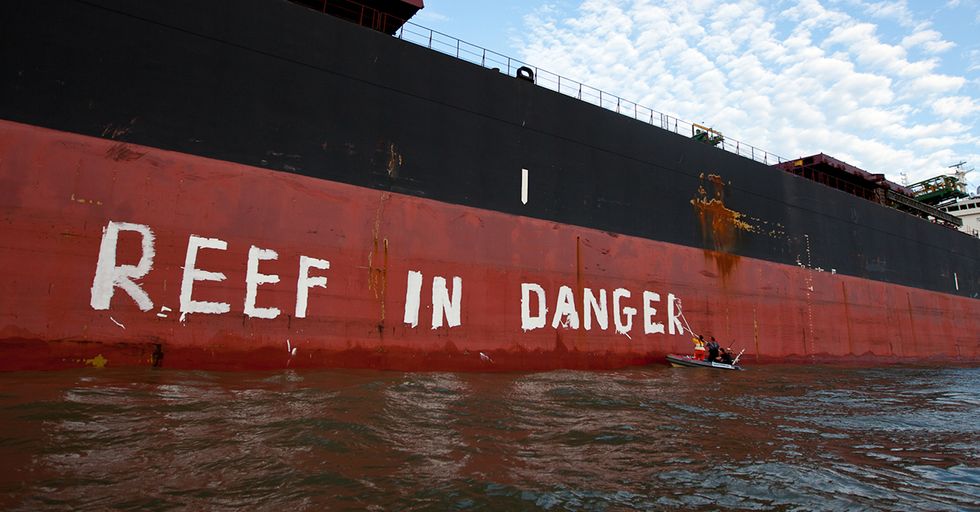 The Great Barrier Reef is in big trouble.

Located off the coast of Queensland, Australia, the Great Barrier Reef stretches for over 1,400 miles. The reef itself is made up of living corals and it's home to thousands of animals including over 1,500 types of fish, whales, dolphins, crustaceans, sea turtles, sharks, stingrays and in some places even saltwater crocodiles. It is so large, it can be seen from space. And it's also dying.

Coral is a living organism. The Great Barrier Reef is made up of thousands of corals that provide homes and food sources for all of the animals living around the reef. Every year about 5-10% of that coral dies naturally. But in the years 2016 and 2017 fifty percent of the coral that makes up the Great Barrier Reef died or suffered bleaching, which means the corals turned white and expelled the algae living inside them.

Coral can come back from bleaching, it doesn't mean the coral is dead, just under distress. But scientists worry that due to rising ocean temperatures and pollution, these large bleaching events will continue to happen every year until the Great Barrier Reef dies completely if we don't do something to stop it.

But instead, Australia just announced a plan to dump one million tons of sludge into the Great Barrier Reef.

The country issued permits for a plan to dump sediment from a port into the ocean around the Great Barrier Reef.

Generally, dumping material into the Great Barrier Reef is banned by the Australian government.

However, due to a loophole, the Marine Park Authority has approved the dumping of sediment into the Great Barrier Reef for this particular project.

Dumping is banned for new and capital projects like the construction of new waterways, however, it is not banned for maintenance projects.

The project that will dump over 1 million tons of sludge into the waterways around the reef is a maintenance project clearing out the waterway at the Port of Hay Point.

The Port at Hay Point is a coal export port.

Ships go in and out of the port and as they do, sediment builds up. The port plans to dredge the built-up sediments and dump it into the Great Barrier Reef over the next ten years.

Environmentalists in Australia are working hard to get the permit revoked.

They say that dumping the sediment into the waters around the Great Barrier Reef will harm the already fragile ecosystem.

And it doesn't matter to them if the sediment is coming from maintenance to an existing port or from new construction.

Australian Green Party senator Larissa Waters is working to get the permit revoked.

According to an article in Smithsonian.com, she said, “One million tonnes of dumping dredged sludge into world heritage waters treat our reef like a rubbish tip."

The plan to dump the sediment comes after flooding in Queensland recently dumped land sediment into the reef.

The flooding dumped tons of sediment into the reef, some of which was contaminated with pesticides.

It also brought tons of fresh water into the salt water reef, which put corals at a higher risk of bleaching.

The sediment also smothers natural seagrasses that are a food source for many of the animals that live on the reef, like turtles.

This dump of sediment and freshwater was already putting the reef at risk this year.

Environmentalists are worried that the plan to dump sludge from Hay Point will put even more pressure on the fragile reef.

But why should we care about coral reefs dying?

After all, we humans don't live underwater. How can a coral reef, something most people have never even seen, really affect us if it dies?

It's a good question.

You may not think about coral reefs very much unless you just got back from snorkeling on a tropical vacation. But coral reefs are actually very important to our ecosystem and our lives.

Coral reefs provide homes for one-quarter of all sea life.

Without reefs, one-quarter of all sea life would die. Which means much of the sea life we use for food would be gone.

Ok, but what if you don't eat that much fish and wouldn't miss it?

There are other impacts of coral reef loss. For one, even if you don't eat fish, many people do. Losing seafood as a significant food source means more pressure would be put on farms to produce meat, increasing pollution and greenhouse emissions.

And aside from that, coral reefs are an important source of money for many countries.

Not only do they provide fishing, but many countries depend on coral reefs for tourism. Without them, they would lose that money coming in from divers and snorkelers who want to see the beauty of the reef.

Coral reefs also serve an important purpose in the ocean: they absorb the impact of waves.

Without coral reefs, waves would destroy coastlines much faster causing erosion and flooding.

Plus, coral reefs are home to many animals we don't want to lose.

The world would be a much sadder place without the marine animals that depend on our coral reefs.

Who eat the grasses and animals that live around the reefs.

That make homes in the coral of reefs.

Octopuses live in coral reefs and can even disguise themselves to look like coral.

Even whales use reefs.

Whales come to feed and give birth at reefs.

In 2015, the Australian government put into action the Reef 2050 Plan.

According to their website, "The Plan sets clear actions, targets, objectives, and outcomes to drive and guide the short, medium and long-term management of the Reef. The Plan firmly responds to the pressures facing the Reef and will address cumulative impacts and increase the Reef’s resilience to longer-term threats such as climate change."

However, the Reef 2050 Plan does not protect from the recent plan to dump sediment onto the reef.

In general, some worry the Reef 2050 Plan is not stringent enough against key elements in the destruction of the Great Barrier Reef such as climate change and pollution.

Some believe that nothing should be allowed to be dumped into the reef and that instead all sediment should be treated and disposed of on shore.

But North Queensland Bulk Ports claims that they are dumping sediment from their project safely into the reef.

According to them, the sediment dumped into the marine park will not harm the Great Barrier Reef and will only moderately affect the bottom-dwelling habitats.

They say dredging is the only way to keep the port usable.

And that the impact will likely be minimal.

But not everyone agrees the impact will be minimal.

According to this Smithsonian article, Simon Boxall from the National Oceanography Centre Southampton says the impact could be really devastating.

It all depends on where they dump the sediment and what it contains.

Since it is coming from a coal port, the sediment could contain heavy metals that can be toxic to marine life.

And if they choose to dump the sediment directly over the reef, it could smother corals and other animals.

The sediment could also cause an overgrowth of algae, which can be toxic to corals.

Either way, the Great Barrier Reef is in big trouble.

And it's up to us to figure out the best way to help it.