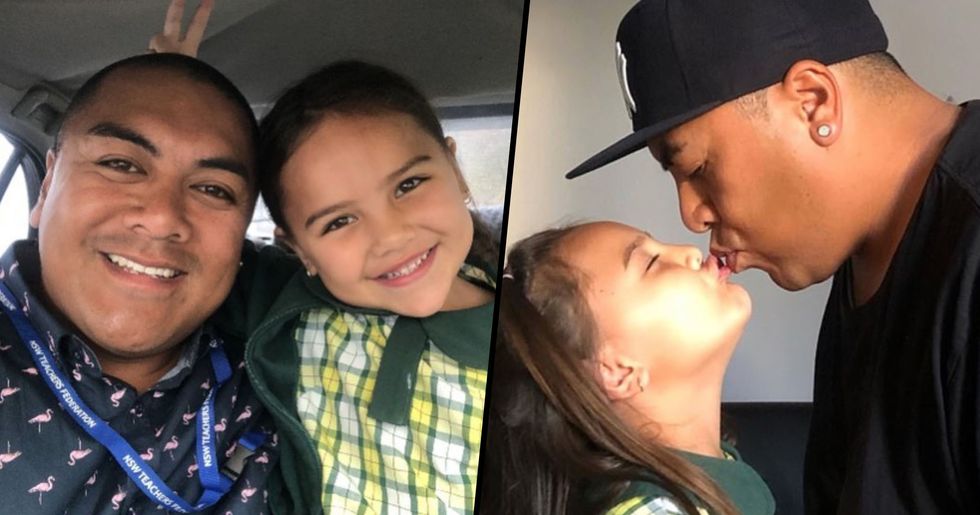 Australian Dad Sparks Controversy by Kissing His Daughter on the Lips

Ever since British journalist and TV host Piers Morgan publically bashed soccer-player David Beckham for kissing his daughter on the lips, it seems to be all that anybody can talk about.

There's extremely mixed opinions on kissing children on the lips, but one dad from Australia begs to differ.

And he's a good friend of our President, Donald Trump.

Though Piers' latest tantrum has nothing to do with the President.

Piers' most recent outburst concerns a very different topic entirely, but obviously the concept is always the same; he's ripping into some other celebrity.

David Beckham, who is a famous soccer star and public figure, has become victim to Piers' rage.

Keep scrolling to see the photographs that caused the controversy. Beckham, who rose to fame after playing for the British soccer team, Manchester United in 1991, hasn't managed to dodge Piers' eagle eyes.

The Beckhams have always been very present on social media.

David and his wife, Victoria, who is also known as Posh Spice from the Spice Girls, have 4 children together and regularly share their family snaps on their Instagram accounts.

Last December, Beckham posted a festive picture of him and his 7-year-old daughter, Harper, sharing a kiss at a London ice-rink. Cute, right?

Not according to Piers...

During an episode of Good Morning Britain, Piers hit out at Beckham, claiming that it was "weird" that the soccer star would kiss his young daughter directly on the lips.

He branded Beckham "creepy" for kissing his children.

Piers just could not get over it: "This is weird. Everything about David Beckham is weird," he said. He also doesn't like the way that Beckham "exposes" his children to his large online following: "I'm sorry, it got a big furor on social media, it’s just weird. Who does that? Who kisses their kids on the lips?"

And exactly a year later, Beckham posted another similar snapshot to his Instagram.

Everything is exactly the same, except for the fact that the father-daughter duo is now a year older than last time. David shared a picture that showed him kissing Harper on the lips, yet again. He also posted some pics of their time at the ice-rink.

And obviously the post was met with mixed reactions.

The previous debate was re-ignited after the image went viral with some users calling it "disgusting" while others re-iterated exactly what we're all thinking. It's just a peck. God!

These scandals have been a part of the Beckham family for a while now.

Piers and the rest of the haters have had their say on the family's Instagram activity before. When Victoria shared a video to her Instagram Stories of David and Harper sharing another kiss, this time on a boat trip in Miami, Piers collapsed into another ranting frenzy.

I bet Piers will have something to say about this too...

Although he admitted that it was clearly a sweet moment, he just couldn't understand why a father would kiss his daughter on the lips. I think it's time to get over it.

But David has refused to apologize and rightfully so.

Speaking in a Facebook Live video back in 2017, David defended his actions: "I kiss all my kids on the lips. I’m very affectionate with the kids. It’s how I was brought up and it’s how Victoria and I are with our children".

And it seems that David isn't the only one to hold this attitude...

Tyrone Matoka, thirty-nine, from Sydney in Australia, has urged others to stop sexualizing fathers for kissing their children on the lips.

Tyrone related strongly to David's photograph with his daughter...

And speaking to Daily Mail Australia, he said he wanted to show that he is a positive role model to his children.

Tyrone shared this photo to his Facebook page earlier this week...

"There is no greater love than that of a parent for their child," he wrote, "Do me a favor - if this photo of me kissing my 5-year-old daughter on the lips offends you, please unfriend me."

Tyrone clearly doesn't see what the issue is...

"If any sort of loving affection shown between a parent and their child offends you, please unfriend me," he also said.

"If seeing a mother in public breastfeeding her baby also offends you, please unfriend me," he said.

"But just before you unfriend me, please take this with you and hide it inside your behind," Tyrone added alongside a middle-finger emoji.

He tagged David Beckham at the end of his post...

Showing he completely supports David's attitude to being able to kiss your own children.

Tyrone spoke of why he believed so strongly in showing this type of affection.

"I myself had a very rough childhood. My father spent most of it incarcerated so I never had a male father figure," he said.

"I want to be that role model to my children. There were a lot of negative things in my past but once I had my kids I channeled my experiences into giving them the childhood I never had."

His post quickly went viral, racking up more than 1,200 reactions.

"The big thing for me is if you want to show affection for your kids and they are OK with that they will go through life knowing the difference between being loved and not being loved," the father added.

Being New Zealand born himself, Tyrone wants to encourage fathers to speak up about their insecurities and fears.

And father of the year goes to...

He also acted as an ambassador last year for Cabramatta Local Area Command's White Ribbon Walk - which raises awareness about domestic violence. To read about the dad who built a 2-storey playhouse for his daughters, keep scrolling...