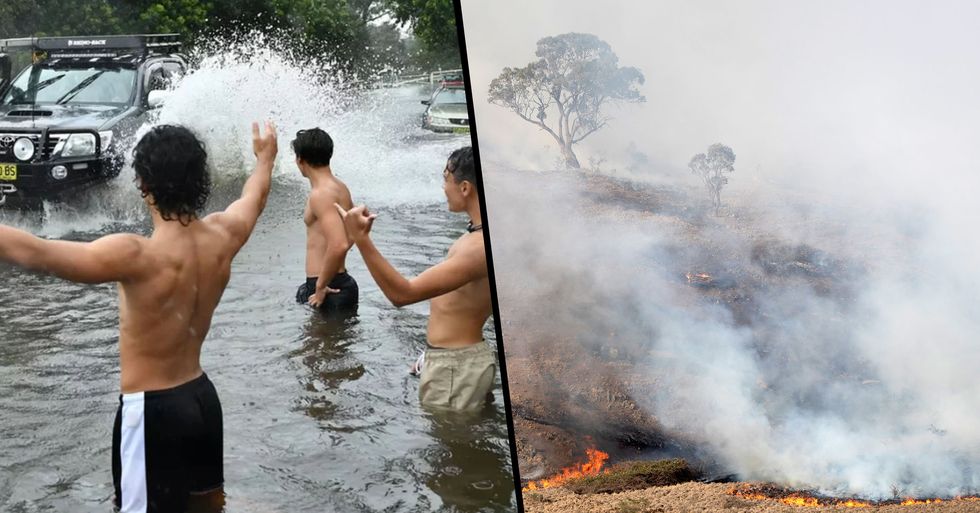 Since September last year, Australia has been subject to devastating fires, that have ravaged the whole country. Entire communities have been engulfed by the relentless heat.

The tropical cyclones only worsened the situation bringing major floods and dangerous winds.

But now, we finally have some good news...

Australia has been hit with the heaviest rain in three years.

As good as it sounds, the downpour also has some dangerous consequences.

The assistance from global fire services has been amazing.

But despite the high volume of firefighters tackling the blazes...

Human effort was simply not enough to extinguish the raging fires.

The country has been in desperate need of rain...

And after months of bushfires and years of drought... there's been some good news.

It's finally raining in Australia!

Australia has finally received some rainfall, providing relief from the raging fires.

But sadly, the rain may cause more harm than good.

Quentin Grafton, a water expert and economics professor at the Australian National University, admitted that the rainfall isn' t all positive.

Speaking to Metro, Grafton explained: "At this stage, it's very good news, and certainly much more than people could have wished for or expected." "There are some very happy people." But sadly, the downpour hasn't been distributed evenly across the affected areas.

But there's no doubt there have been some major celebrations.

The New South Wales Rural Fire Service tweeted: "This is the most positive news we've had in some time." "The recent rainfall has assisted firefighters to put over 30 fires out since Friday. Some of these blazes have been burning for weeks and even months."

The rain has been a long time coming...

And while this rainfall may not be the end to Australia's problems, it has certainly been welcomed with open arms.

This is such good news...

All the fires in New South Wales have been contained for the first time since the fires first broke out.

It has been a very traumatic bushfire season.

The rural fire service called it "great news" which is putting it lightly.

Rob Rogers, the deputy fire service commissioner had something to say...

"It has been a truly devastating fire season for both firefighters and residents, who've suffered through so much this season."

There have been months of fires in Australia.

Firefighters say there are still areas of activity, but with all the fires contained, it's easier for firefighters to focus on the problem areas.

Torrential rainfall is sweeping in this week.

The cyclone has brought with it, heavy rainfall, damaging winds, and severe thunderstorms.

Several towns have been evacuated.

Schools around the area have also been closed.

The rains have helped to extinguish more than thirty fires.

The fire service tweeted on Monday that it's "the most positive news we've had in some time."

The Currowan fire was put out on Saturday.

The intense rain is forcing authorities to open floodgates.

It's been the highest continuous rainfall Sydney has seen in thirty years, so the pressure needs to be released to prevent the collapse of local dams.

Although Australia faces this every year, it has reached a new level.

The fires have damaged World Heritage Areas, with the Blue Mountains and the Gondwana rainforests being the most affected. It's been reported that a staggering 113 species are at risk according to the environmental department, including: "13 birds, 19 mammals, 20 reptiles, 17 frogs, five invertebrates, 22 crayfish, and 17 fish species." We can only hope Australia can heal from the devastating destruction it's faced.