Hannah was hosed down by terrified neighbors but she later passed away in hospital... | 22 Words 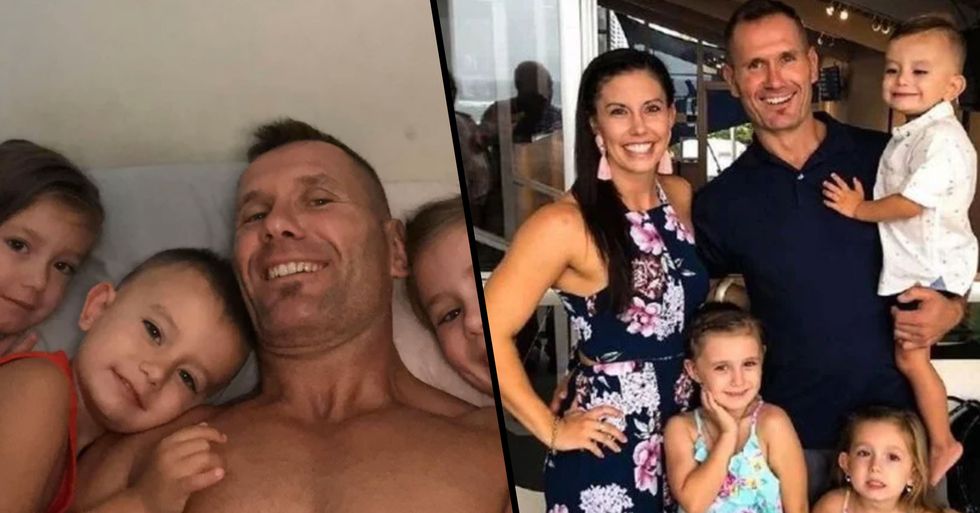 The tragic news has just come in that former Australian football player, Rowan Baxter, has passed away after stabbing himself and killing his 3 children in an ignited car.

His wife was also in the vehicle at the time of the incident.

Rowan Baxter has passed away at the age of forty-two.

The former Australian National Rugby League player was pronounced dead this morning, but the circumstances of his suicide are truly horrific.

Baxter lived in Brisbane with his wife, Hannah, and their 3 children...

But in the last year, Baxter had separated from his wife...

And the couple had shut down the fitness business they ran together, Integr8, which was based in Capalaba.

This caused the New Zealand native to go on a downward spiral...

And he finally snapped in the early hours of this morning.

He committed the most horrific of acts...

According to local media, as Hannah was strapping their 3 children into her white SUV to do the school run at around 8.20 am, Baxter jumped into the car and doused Hannah and the children in petrol.

She was parked down the road from her parent's home...

Aaron Snell, a neighbor who witnessed the horror, said to The Daily Mail he initially thought he was watching a road rage attack before he realized the gravity of the situation.

Baxter then set the car on fire, containing his wife and 3 children.

Hannah managed to roll out of the car, with witnesses recalling her being "covered in flames and smoking," but devastatingly,  all 3 of their children were unable to escape and be saved.

Hannah was hosed down by terrified neighbors but she later passed away in hospital...

And one man desperately tried to rescue the children from the burning car, which had ultimately caused an explosion down the suburban street, but Aaliyah, Laianah, and Trey also perished in these horrific conditions.

Witnesses recalled Baxter being in a "fit of rage"...

"He was so angry and just going absolutely crazy. It appeared like he wanted [the car] to burn," neighbor Aaron Snell said.

And during the devastating chaos...

Baxter drew a knife from the burning car, which he then used to stab himself in the chest - ultimately causing his death.

It appears that his behavior had been erratic in the last few months...

During the custody battle that he had been undergoing with Hannah, Baxter had taken to social media to gush over his children, writing messages in the last month such as, "T-R-E-Y, love you to the moon and back," and "Goodnight my babies, Daddy loves you."

This is a tragic loss.

Detective Inspector Mark Thompson told reporters police were yet to ascertain whether the explosion was a murder-suicide or a tragic accident.

The official report came in a few hours ago...

"On arrival, police, and emergency services have identified five people that were involved in the fire inside the vehicle. I can confirm that we have three deceased children under the age of 10 in the vehicle," Thompson told reporters at the scene.

The police have never seen anything quite like it...

"I’ve seen some horrific scenes," Thompson said. "It’s a terrible thing to be presented with." He also said there were "other areas of interest" and anticipated that other crime scenes would be declared.

This was a cruel, cowardly, and selfish act...

And our hearts are truly breaking for Hannah, Aaliyah, Laianah, and Trey, whose lives were all cut so terribly short. Our thoughts and condolences go out to their family during this unimaginable time.