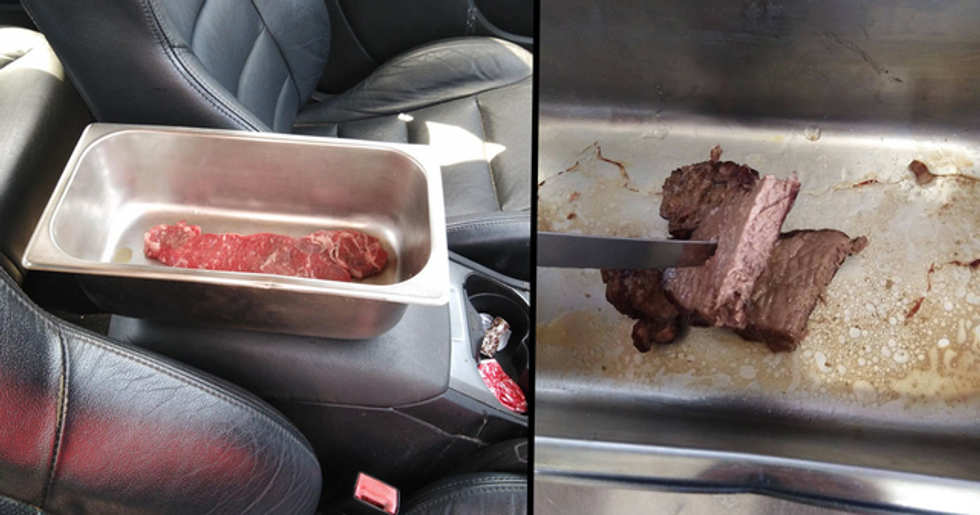 While we in the northern hemisphere settle in for what seems like our tenth month of winter, Australians are facing quite a different problem. The land down under is known for being a pretty hardcore place to live, and this latest development further proves our point.

A cafe owner from Mildura in Australia proved a point about the intense heat this week. The man left a raw steak sitting in his parked car during a day at work. And when he returned, the steak was not just cooked - it was well done.

The Facebook post has captured the internet's attention, with hundreds of comments and thousands of shares. The image of the well-cooked steak sitting in the car is pretty shocking. And while the post is initially lighthearted and funny, there's actually an important message behind it, too.

So, for those of you who don't know, this is Australia.

We're kidding, of course - although Australian news stories do have a tendency to get swept under the rug in favour of the rest of the world.

Honestly, though, it's famous for a few selected things - kangaroos, koalas, spiders, barbecues and beer in particular.

This GIF, taken from Kangaroo Dundee, is as stereotypically Australian as it gets.

Australia is also famous for something else, too.

Its extreme weather conditions are notorious - particularly the heat Australian residents face in the summer time.

In some parts of Australia, it's not just uncomfortable - it's dangerous.

In 2009, the South East of Australia suffered such an intense heatwave that Mildura (a city in the region) set a record for twelve consecutive days of temperatures over 109 degrees Fahrenheit.

At least Australians have a sense of humour about it.

Their Tweets about the extreme weather are always hilarious and well worth seeking out.

At least they can find some sort of relief.

Remember that in the Australian summer it's illegal to go into a bottleshop and not say to the bloke working there… https://t.co/8IebIUBokx
— Dave (@Dave)1513302993.0

Even if the respite can only last for as long as it takes you to choose which beers you fancy.

Suffice it to say - it gets hot in Australia.

It sounds like the summertime down under (which, let's remember, equates to the Northern hemisphere's winter months) can be pretty miserable.

In it, an Aussie policeman is able to fry an egg in a pan on his car bonnet, using only the heat from the sun.

This is Mildura, a city in Victoria, South East Australia.

We've actually talked about it already - remember that city which set the record for the longest consecutive run of days with temperatures over 109 degrees?

This is Mildura Dockside Cafe.

It's a picturesque little spot by the dockside marina in the city, and serves food and drinks for breakfasts, lunches and dinners.

A worker at the Cafe shared something quite shocking on their Facebook page.

He shows a raw, porterhouse steak, left in a baking tray in his car, which he claims was parked in the shade.

The man left his car between 11am and 4pm.

And when he returned, the steak was totally cooked, just by the heat of the inside of his vehicle!

He cut into the steak and saw it was cooked all the way through - there was no medium-rare areas here.

People were shocked by the images.

It's one thing to be able to fry an egg in a minute or so - but the fact that the sun cooked and entire steak is almost unbelievable.

I hope ya’ll living in Australia are finding a way to escape the hot temps there while it is cold here and possibly… https://t.co/0pmHpuUt4F
— Zach Sciascia (@Zach Sciascia)1547624324.0

It's hard to imagine this type of heat - particularly when areas in the northern hemisphere are still covered in inches of snow!

The poster wrote, "With this heat wave please remember never to leave children, elderly or animals in the car. Always check on elderly neighbours, ensure your pets have a way to keep cool and cool drinking water."

When you see what the heat does to the steak, it's pretty scary.

Particularly when you think of live animals who could be potentially trapped in these dangerous conditions.

Leaving dogs in hot cars can be hugely dangerous.

Dogs can die in hot cars in as little as six minutes - times their owners may think are safe to quickly nip out and leave them behind.

This statistic is even more horrifying when you think about children.

A quick search of the internet shows some true horror stories. If you're ever unsure just think: it's far better to be safe than sorry.

One commenter said "A car turns into an oven. Get the message people!!"

Others were more sceptical.

One wrote, "I'm sorry I'm calling bullshit. A car left IN THE SUN will get up to about 60 to 70 degrees C inside. In the shade? Nope. Not going to get "well done". It's a good message, but don't take people for fools."

Though the original poster stuck to his word.

He responded to the comment, saying, "I also wasn't sure what would happen when I put it in there either. I was just as shocked at the result as many others have been."

Another user stood up for the OP.

They commented with this picture of a warped plastic pen on a car seat, saying "Mildura melts pens I’m sure it could cook a steak."

Others had a ... different response.

One user commented that the steak looked a little overdone, saying "Looks tough... should have gone back at 2." Another said "Your car would have smelt amazing when you got back in."

Although we have to agree with the comment - the car-cooked steak does look a little overdone for our tastes.

There were a few very funny comments on the post.

One Facebook user even said "My car is white, would you recommend 3 days for a roast pork?" Well, if you have to suffer through the weather, may as well at least enjoy some tasty cooked meats, right?

But let's not forget the main message of the post.

In response to the doubtful comments on the post, he wrote, "I also believe we're straying from my initial reason for doing such a thing, I wanted to remind people how dangerous this heat can be and that as a community we should be looking out for one another and keeping each other safe."

Well, one of the reasons.

The original post also said, "Also always remember down at Dockside we have plenty of activities to cool you down, yummy cold drinks, great aircon and we are pet friendly out on the deck. ?" We see what you did there...

Either way, people of Mildura, we feel for you.

And, even if you're feeling sceptical, let this post serve as a valuable reminder. Stay safe out there, folks!