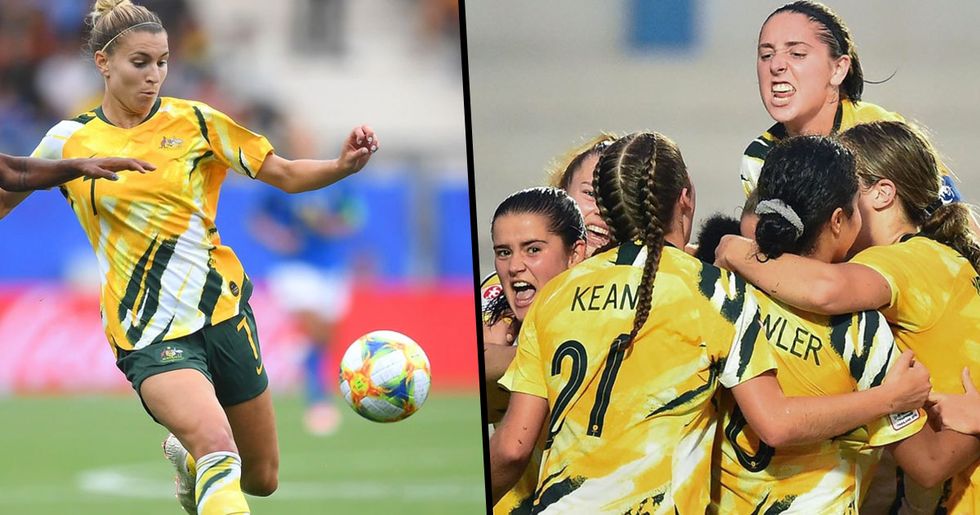 Gender inequality is rife in the sporting industry, particularly when it comes to soccer. Often, female soccer players aren't taken as seriously as their male counterparts and are paid significantly less, despite playing the exact same sport.

You'd think that by now, in 2019, more would have been done to combat this, but sexism in sport is still a huge issue. You only have to look back to earlier this year when the US women’s team sued governing body, US Soccer, alleging gender discrimination in earnings and working conditions - which hugely propelled pay disparity between the professional men's and women's team into the mainstream spotlight.

But, today, history has been made as Australian women's soccer team, the Matildas, have secured a groundbreaking equal pay deal aiming to "close the gap" between the men's and women's national teams.

It's a huge milestone in fighting against gender inequality. Keep scrolling to learn more about what the deal means for the future of professional female soccer players.

The gender pay gap in soccer has been skyrocketed into the spotlight in recent years.

According to Reuters, figures from the Women’s Sports Foundation show that by age fourteen, girls drop out of sports at two times the rate of boys, with the lack of opportunities and access to equipment, social stigma, and safety and transportation cited as key reasons. And who's to blame them? The figures are dire, to say the least, and what motivation is there when sport, especially soccer, is deemed a man's world?

But, the truth is, more people than ever are watching, and supporting women's soccer.

This year's women’s World Cup in France was hailed by soccer’s world governing body as the best yet and boasted a record billion TV viewers.

And it seems women across the world have had enough of not being taken seriously.

More and more sportswomen appear to be taking a stand against gender discrimination in sport.

In June, Australian women's soccer team, the Matildas, launched a campaign demanding prize-money parity ahead of the women’s World Cup.

And 4 years earlier, the Australian women's team canceled a sell-out tour of the US following a dispute with the FFA over their pay, which the players said was so low it was "illegal."

But, this week, their efforts seem to finally be paying off.

The Matildas, who currently rank 8th in the world, have secured a history-making equal pay deal.

Australian soccer's governing body announced it had reached an agreement with the players’ union on Wednesday.

So, how does the deal work and what exactly does it mean for women in the sport?

Well, firstly, the Football Federation Australia (FFA) say the groundbreaking 4-year deal means the top male and female players will be on the same pay scale. "This is a massive step taken to close the gender pay gap between the Socceroos and the Matildas," explained FFA chief executive, David Gallop.

Under the new deal, female players will receive an increased share of prize money for FIFA World Cup qualification.

Both sides will be valued equally...

And both teams will receive the same cut of commercial revenue - like advertising, for example.

Top female players will also see a boost to their salary.

The Matildas are additionally set to receive identical training conditions and other entitlements - such as business class air travel - which are currently given to the Socceroos, Huffpost reports.

And the deal includes reviewing the FFA's parental leave policy...

This means that women playing for the national team are supported during pregnancy and upon their return afterward.

But, the new agreement, which is set to be finalized next week, doesn't necessarily mean the teams will be paid the exact same amount.

It only ensures that they get equal revenues.

Either way, it's still a huge game-changer in the sport.

According to the Guardian, Matildas defender, Alanna Kennedy, said collaboration between the two teams had been a big part of the deal negotiations. “For us as females, it’s always good when you’re appreciated and they show the support," she explained to News Corp Australia. “We’re hoping [it is finalized] by the end of the week. If we were to get it across the line it’s exciting and a huge step forward for us."

Many believe the deal proves that women's sport is finally getting valued the way it deserves.

“Any move like this for equal pay - and for such a prominent team as the Matildas - is a real boost in the arm to show that times are changing and women’s sport is being seriously valued," explained Susanne Legena, CEO of Plan International Australia.

The deal will also likely encourage more young girls to get into the sport.

“It will encourage girls to potentially keep active during those teens years when they normally drop off," Legena added.

Currently, it's unclear what the deal means for prize money arrangements.

Prize money in the men's game is significantly higher than for the women’s equivalent. The total prize pool for this year’s women’s World Cup in France was just $30 million compared to staggering $400 million at the men’s event in Russia in 2018 - offering a horrifying and stark reality at the inequality that's alive and kicking in the sport.

So, while both teams will now receive an equal cut of 40 percent of prize money...

The men will probably still earn more overall as their prize money is so much higher than their female counterparts.

He believes the new pay agreement would give the next generation of Australian children “a chance to be an Olympian, and the lure of playing at a FIFA World Cup - regardless of your gender." “It means whether you are a male or female, the value football places on your jersey is no different," he continued.

Matildas midfielder, Elise Kellond-Knight, is also confident that the deal will have huge positive impacts.

"As a female footballer it's what we've always dreamed of. We always wanted to be treated equally. "The new CBA shows signs of respect -- we are going to be completely included. Having these facilities that the men have been exposed to will set us up for success."

Let's just hope this is the start of an even bigger movement in sport.

Progress is finally being made. What an amazing step in the right direction.