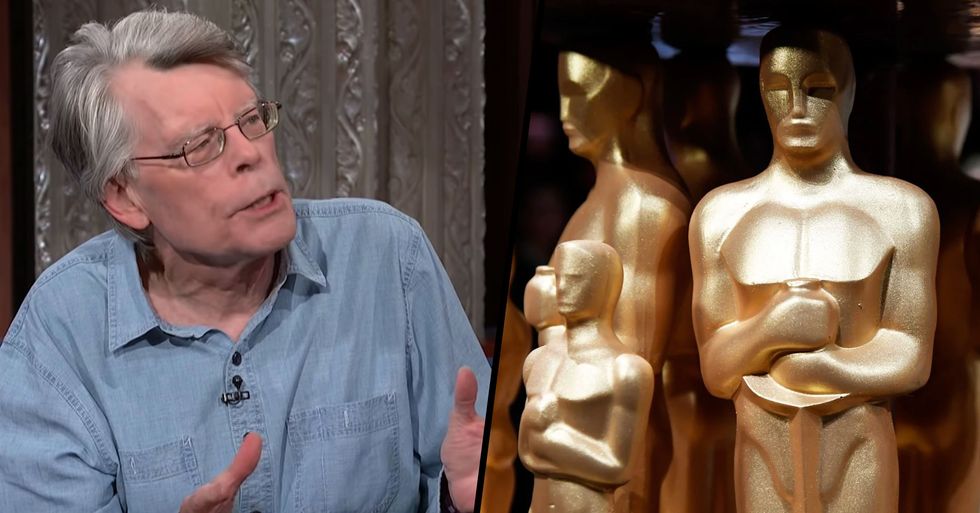 The master of horror, Stephen King, is a pretty interesting guy.

He is a best-selling author and his classic book IT was recently made into a feature film that blew away critics and audiences alike.

He is usually very much loved by his fans, but after some recent comments about diversity at the Oscars, people are feeling a little different about the author.

Stephen King is one of the world's most recognized authors...

The world-renowned author has published sixty-one thriller and horror novels, and he has sold more than 350 million copies worldwide.

Born in Portland, Maine, the seventy-two-year-old author had a pretty normal upbringing...

And he first found inspiration for writing horror after reading a collection of short stories by H.P. Lovecraft. King stated that he "knew that he'd found home when he read that book."

His first professional story came in 1967...

His home state of Maine has had a huge influence on his work.

Many of his stories take place in fictional Maine towns, such as Derry and Castle Rock. King has stated that Derry, the setting for IT, is loosely based on Banger, where he currently resides with his wife Tabitha (and their dog, The Thing of Evil Molly, of course.)

Many of his novels were recreated on the big screen...

And his decades of work have inspired so many writers and film producers, including the Duffer Brothers who have credited King for their inspiration behind the creation of Stranger Things.

He has also been the recipient of a number of accolades.

He has received World Fantasy Awards, British Fantasy Society Awards, Bram Stoker Awards, an O. Henry Award, the World Fantasy Award for Life Achievement, the Canadian Booksellers Association Lifetime Achievement Award and the Grand Master Award for the Mystery Writers of America. He was also awarded the National Medal of  Medal of Arts from the United States National Endowment for the Arts for his contributions to literature in 2015 by President Obama himself.

Stephen King is a man who knows what he's doing.

But the author is no stranger to landing himself in hot water...

He makes his opinions of President Trump very well known on social media, and despite many agreeing with him, there are a lot of people who don't always appreciate his views.

King is known for his Twitter rants about politics...

Remote control killing--diplomacy by drone-strike--seems to be the only diplomacy this president knows. Other than… https://t.co/nnKgyzOm8A
— Stephen King (@Stephen King)1578064726.0

But his most recent tweets aren't to do with the president.

He has recently tweeted about diversity at the Oscars...

The 92nd Academy Awards will be taking place on the 10th of February in Los Angeles, and the list of nominees was recently announced.

People have not been happy with the nominee list...

The Oscar nominations yesterday show that diversity is still a major issue and the film industry in the West has a… https://t.co/GSJpuBMSas
— Mehwish Hayat TI (@Mehwish Hayat TI)1579005081.0

It's lack of female directors and actors of color left people feeling that there was a complete lack of diversity.

There has been an online global debate about the subject...

And of course, the master of horror has decided to chip in his opinion.

"As a writer, I am allowed to nominate in just 3 categories: Best Picture, Best Adapted Screenplay, and Best Original Screenplay. For me, the diversity issue--as it applies to individual actors and directors, anyway--did not come up. That said..." King wrote.

He then tweeted this...

...I would never consider diversity in matters of art. Only quality. It seems to me that to do otherwise would be wrong.
— Stephen King (@Stephen King)1579004415.0

"I would never consider diversity in matters of art. Only quality. It seems to me that to do otherwise would be wrong."

People were not impressed...

And many began to call out the author and he was even branded as demonstrating "white privilege."

The lack of diversity is an issue...

And it is very disappointing that a man with such high intelligence and experience fails to recognize and respect that fact.

The most important thing we can do as artists and creative people is make sure everyone has the same fair shot, reg… https://t.co/hkjSfDEPmm
— Stephen King (@Stephen King)1579013786.0

He tried to save himself by writing, "The most important thing we can do as artists and creative people is to make sure everyone has the same fair shot, regardless of sex, color, or orientation. Right now such people are badly under-represented, and not only in the arts."

Let's hope that King can reevaluate what he just said...

Because he is so much better than the ignorant comments that are representing him right now. Keep scrolling to see the full list of The Oscars nominees for next month...