30 Places With Names So Strange, You'll Think We're Making Them Up | 22 Words 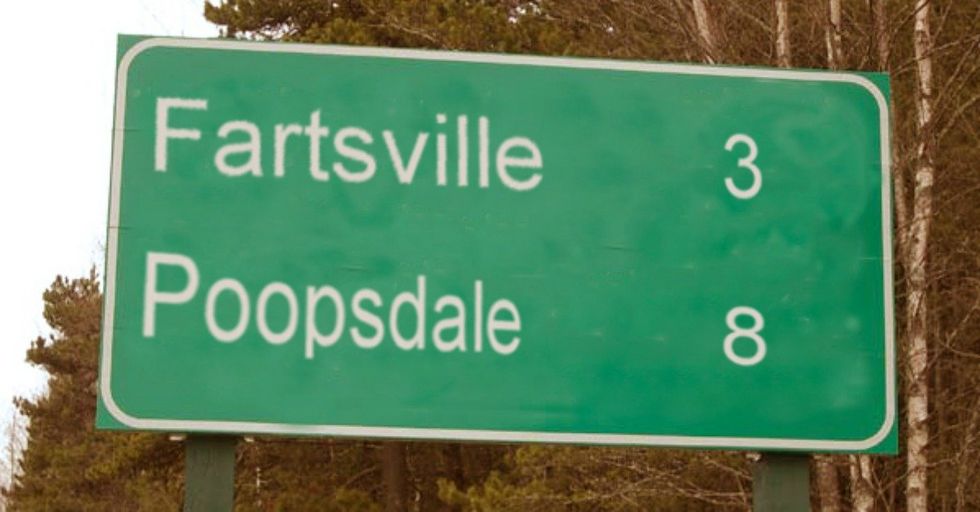 30 Places With Names So Strange, You'll Think We're Making Them Up

So, where are you from? That's a normal question to ask when meeting somebody new, and most of the time it's actually just really boring filler.

But what if you lived in a place where the name was, shall we say, a little bit more unique?

If it was one of the towns below, I can guarantee it would spice up that conversation...

You can literally tell someone to, "Go to Hell" and there's nothing they can do about it.

Do they even have eyebrows? I'm not sure, but legend says that if you stand on the top of the hill and look down on the town, the town looks like it's in the shape of a monkey's eyebrow. In that case, there should be an apostrophe in that name, but I'm not the mayor.

There is NOTHING to see here. Nothing at all...

What do they call the residents? Chickens? Hens and Roosters? Chickeners?

No one will ever know if you're telling them where you're from or what you want them to do.

It's a name that all the residents can really get behind.

Now the residents here are some that you wouldn't want to get behind, especially after Taco Tuesday.

I guess it's a little better than Truth or Dare, although not nearly as fun.

Better than roses, given the whole "thorn" situation, if you know what I mean.

"Yes, I know 'you only live once,' but where do you actually live?"

"No, honey. You weren't an accident. You're from Accident."

If the school's mascot isn't the Trojans, they're doing this town a disservice.

See? You have to have a fitting mascot. Well done, Hooker! Well done!

To the Bat Cave!

Often shortened to Llanfair PG, it translates to English as "St. Mary's church in the hollow of the white hazel near to the rapid whirlpool of Llantysilio of the red cave." Good luck with that.

Good question...if only there was an answer to that! Wait...

via: Only In Your State

via: Only In Your State

But not advisable if that skillet is a flaming heap of fajitas.

Well, there's Nowhere Else to go, so I guess we're stuck here.

Located in rural Sussex, it's a great place to visit on your way to nearby Wetwang and Shitterton.

Did I even have to add that it was in Texas? It's a pretty safe assumption, I think.

They were going to go with Frog Blow, but that didn't make any sense.

Let's take a walk through Puke! I want to go to Puke!

Much better than Tepid Tea.