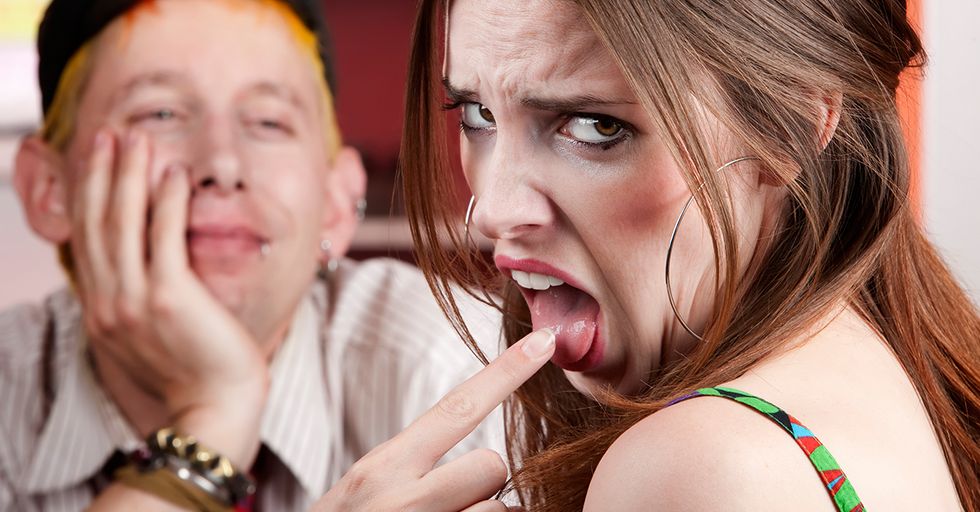 Being in love is the best, but going on dates? Well, it's kinda the worst.

Ask pretty much anyone who's ever gone on a date, and they're likely to tell you that they have a bad first date story. I once had a date exclaim in surprise, the phrases, "You're pretty funny for a girl" and "Dang! You can eat!" As you can imagine, there was no second date.

If you ever find yourself needing to read other people's experiences with bad first dates, I recommend going to Twitter and combing through the hashtag #WorstFirstDate. Jimmy Fallon has even used the hashtag a few times to feature funny tweets on his show.

There's something very hilarious and oddly comforting about reading through other people's negative experiences — perhaps because we know that even though they had a bad date (or several of them), they turned out okay. Maybe they've even found the love of their life since then!

Trying to get over your own awkward first date?

Then read through these stories! They should make you feel better. But, they also might make you want to give up dating altogether.

How about some tunes?

Hey, everybody likes what they like. That's totally cool. But to say that you don't listen to music without any explanation? Well, that's a little odd.

What an honest mistake.

#WorstFirstDate I thought he was into fitness because he had on an ankle weight. He was actually on parole and it was an ankle monitor.
— Linda Childers (@Linda Childers)1469666261.0

I hear those things are pretty heavy, so maybe it doubles as his workout? I'm trying to look on the bright side of things.

I'm all for splitting the bill if that's what both parties want. But this idea seems pretty sneaky.

I really thought that as a society we were past “oh you’re a feminist? So you hate men?” but apparently not. #WorstFirstDate
— Poli Sci Bitches (@Poli Sci Bitches)1526039964.0

Here's what you say to that: "No, I only hate the one I'm currently on a date with."

Nothing's more attractive than a date who makes it very clear that you are one of their many, many options. What a toolbox.

Did he really think this would work?

He bought us a cheap takeout dinner then tried to bring it in to the vastly more expensive restaurant where he'd ma… https://t.co/Wtm5C28MIs
— Zimminneecricket (@Zimminneecricket)1539212648.0

I'm so curious about his thought process here. Did he think reservations were just to sit in the restaurant and not eat?

OK, this one is hilarious.

It's kind of refreshing to read about a date that wasn't sabotaged by the other person. What a mistake to make!

I guess I understand asking once about the salsa choice, but multiple times? No. And that's nowhere near as weird as his follow-up.

#WorstFirstDate he talked about himself all through dinner, then drove me around to show me where all his ex gfs lived. #truestory
— Kim C. (@Kim C.)1469669628.0

At least now you know where to go to find people who will talk with you about how weird that guy is!

Reluctantly went on a blind date through a mutual friend. Halfway through the date, we discovered that we are related. #WorstFirstDate
— Chris Konya (@Chris Konya)1469656508.0

At least you'll never have to see each other ever again. Well, that is. until the next family reunion.

If you thought that last one was bad, check this one out:

Yep. You win, I'm so sorry this happened to you.

I wasn't too shocked by this one. Until I found out they were 21-years-old. That is, really something.

You can forgive a lot of things in the name of love, but not liking pasta or garlic? That is not one of those things.

The circle of life.

The Lion King is an amazing movie. And yet, this is still 100 percent bonkers.

It could've been worse.

Thank you for clarifying who the dog had bitten. Sounds like this was a pretty bad date for him, too!

Um, excuse me, what?

That is when you should get out of the car! In case you were wondering.

There's so much to unpack here. I can't decide which part of that story is the worst.

What a cool guy.

Oh man, you definitely missed out on dating someone who is clearly amazing, unique and very smart. Do you think you could still get him back?

Planned on just us two going to a movie together. When I showed up she had brought her mother, her sister, her sist… https://t.co/yRtop7hya6
— Campbell_arell (@Campbell_arell)1531710377.0

Are you sure you're not an Uber driver? Did they think you were their Uber ride to the movies?

Was it a good picture?

“And then he pulled out his phone and he had a pop socket with a picture of himself on it” HAHAH #WorstFirstDate
— Jessica (@Jessica)1527569900.0

Maybe it was his identical twin? Never mind, that would still be weird.

I'm trying to imagine this playing out in real life and I just can't. What a world we live in.

This is exactly what I wanted to read today. There's hope for all of us!

#WorstFirstDate after learning I did not like wine or beer, he took me to THREE bars that ONLY served wine and beer… https://t.co/GANCtTxreO
— cat mom (@cat mom)1526699200.0

What's that phrase again? Oh yeah, it's "three strikes, you're out!"

I have so many #WorstFirstDate stories. One was when the guy tried to impress me by counting to ten in Spanish. He didn't get passed six.
— cat mom (@cat mom)1526699084.0

Is anyone actually impressed by someone counting to 10 in Spanish? Like, is that a thing that impresses people?

"Why can't they just see me for the person with thousands of dollars in the bank that I am? It's like they only notice my expensive shoes and very nice car."

#worstfirstdate I had a great date, good food, nice conversation. I escorted her home via a taxi. Or I was going to… https://t.co/qmtcOpE0Zg
— Arye 🇪🇺🏴󠁧󠁢󠁳󠁣󠁴󠁿🇩🇰 (@Arye 🇪🇺🏴󠁧󠁢󠁳󠁣󠁴󠁿🇩🇰)1525030372.0

Pretty bold move to take a taxi home when your husband is a taxi driver. I'm guessing he didn't discount her fare at all.

What does that mean? Was it a three-person date?! Was the other person her first date and you were the second? I need answers.

I went to a fancy place. He ordered, & ate,the most expensive food on the menu.He went to wash his hands and never returned. #worstfirstdate
— Michelle (@Michelle)1469655700.0

Legend has it that he's still in the bathroom washing his hands.

#WorstFirstDate going to a restaurant where his ex was a waitress and he burst into tears begging her to take him back is up there.
— Candy Dax (@Candy Dax)1469656473.0

This is not a good look. I hope she didn't take him back, and I hope that you got a different ride home. Share this with someone who recently had a bad date!