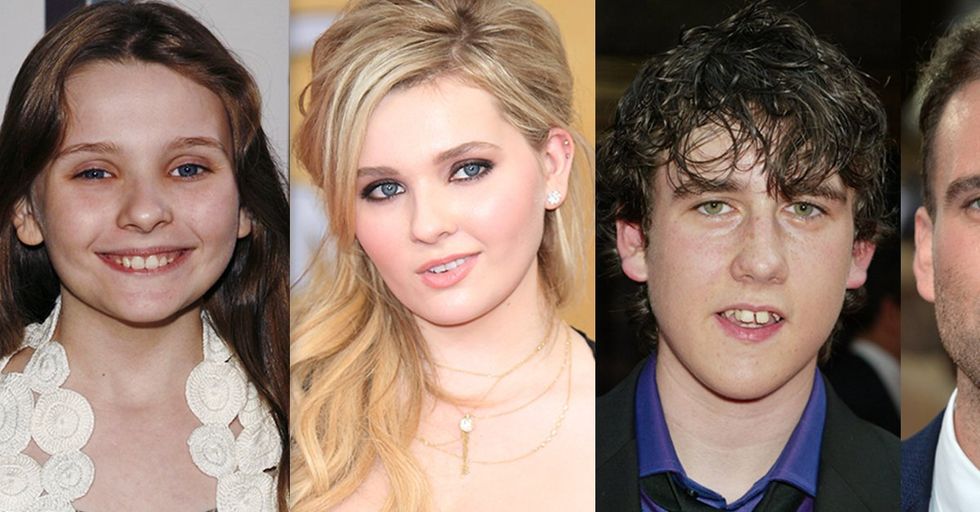 Growing up on the silver screen is not easy. Your awkward puberty years are blown up about 50 times, and sometimes the whole world is watching. But there's a special kind of revenge that many child stars get on all those who watched them grow up. And that is: They get super hot.

Like, unbelievably so. Their transformations are all the more awesome because we can say we knew them way back when. These glow ups are inspirational to us all, and simultaneously, we are not worthy of peering upon these beautiful souls, but we're going to show these pics to you anyway.

Perhaps the most drastic child star transformation came to us from Hogwarts in the form of Matthew Lewis, who played Neville Longbottom. As a little kid, Lewis matched his character; he was a bit awkward and easy to make fun of. But joke's on us...

Because Matthew Lewis became smokin' hot! Like, what? He even became a verb — the term for when child stars make pretty incredible transformations to adulthood is now called Longbottoming.

Josh Peck was the goofier, chubbier, nerdier half of Drake and Josh, but that was then. Now?

Ooh mama! Josh Peck...well, he now has pecs. And he more than held his own as John Stamos' costar on Grandfathered.

True story: When I went to see Little Miss Sunshine with my family, my parents started hysterically laughing when Abigail Breslin appeared on screen with her messy ponytail and her giant Coke bottle glasses because she looked exactly as awkward and dorky I did as a kid. The good news is...

Abigail Breslin totally grew out of her awkward phase and into a beautiful young woman. The bad news is that I'm still as awkward as ever. Good thing I'm not famous, right?

As charming as he was, Nicholas Hoult pretty much epitomized the bullied nerd when he appeared in About a Boy. It's one of the best movies, and even better now that Hoult has had an immense glow up.

Look at him! He could be James Bond if he wanted to! The man dated Jennifer Lawrence, for goodness' sake! I'll just say Nicholas Hoult just did a really good job growing up and leave it at that.

You probably recognize Blake McIver as Waldo from The Little Rascals movie in the '90s. He also played Michelle's friend Derek on Full House.

Michelle Trachtenberg hit it big as Nona on The Adventures of Pete & Pete, Harriet the Spy, and then she just...kept going. She's been a staple on movie and TV screens ever since she was a little kid.

Trachtenberg remained a huge presence on the Disney channel throughout my youth, eventually graduating to shows like Buffy the Vampire Slayer, Gossip Girl, and Six Feet Under. The woman is prolific.

Matt Timmons played Woody from The Suite Life on Deck (shoutout to the Sprouse twins, who also belong on this list). On the show, he looked like this. But fans recently discovered that Timmons has made...a change.

THIS is what he looks like now. HELLO WOODY! Twitter obviously went crazy with reactions to Timmons' glow up, and he actually responded. In a tweet, he wrote, "Tbh the past few days I was feeling pretty insecure w/ myself. Seeing things like this and the nice comments people are making really helps."

Chlumsky stole all of our hearts as Vada Sultenfuss in My Girl, the saddest movie ever made in the history of the world. But now, she's stealing our hearts in another way...

Yeah girl! After a hiatus from acting, she returned to acting in the mid-2000s, and you know her today as the foul-mouthed Amy Brookheimer in VEEP. I adore her.

Lest we forget that Mr. Inception started out as a long-haired alien kid on 3rd Rock From the Sun. Actually, before that, he was a cute, baseball-loving lad in Angels in the Outfield. Joseph Gordon Levitt is one of those rare child stars who seamlessly made the transition from kid roles to adult ones, and grew up fine in the process.

If I'm being honest, and I always am, Joseph Gordon Levitt was already adorable, if not a little nerdy, as Cameron in 10 Things I Hate About You, even if he seemed to be in a different league than Heath Ledger. But once (500) Days of Summer rolled around, Gordon Levitt was a certified babe.

Louis Stevens was a prankster — hilarious, yes, but a typical awkward middle schooler. And lord knows Shia LaBeouf has changed a lot since his Disney channel days.

But my oh my he has become a handsome man. Eccentric? Yes. Troublemaker? Certainly. But he's definitely grown up and glowed up. Tell me you didn't feel things while he was dancing in that birdcage in the Sia video. Tell me! You cannot. I know this.