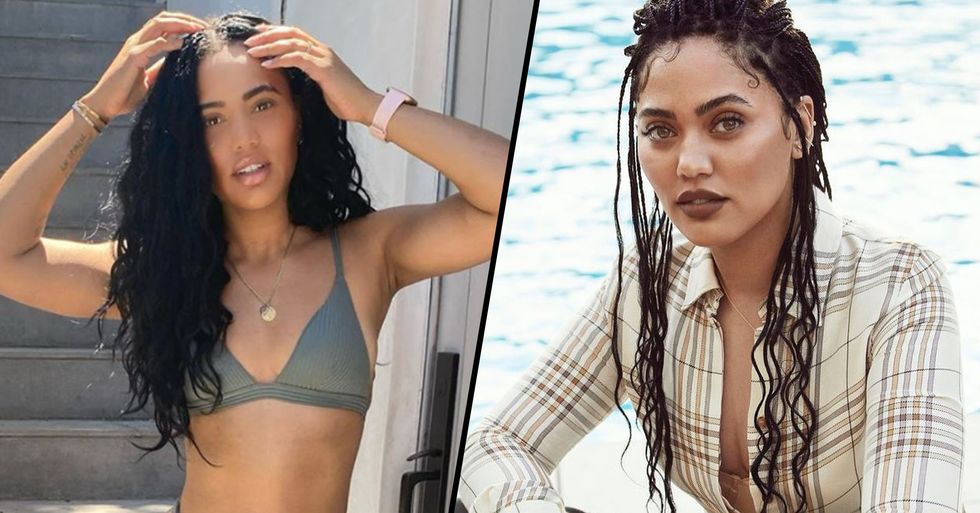 Some of the comments are brutal. Keep scrolling to see the pic.

And it's all over a bikini picture posted to Instagram.

Ayesha has had an eye for work on television since a very young age.

Her first gig came at the age of twelve, in which she acted as the love interest in the music video for "Too Young for Love" by Suga Prince (now known as Sevn Thomas).

After graduating from high school, she relocated to Los Angeles to pursue a career as an actress...

And she started out by appearing in mostly bit parts.

Whilst taking on these small acting roles, Ayesha started her own food blog and YouTube channel...

This lead to a short-lived Food Network Show Ayesha's Homemade that was canceled after thirteen episodes. But this gave Ayesha the exposure she needed.

In 2016, she collaborated with chef Michael Mina in The Mina Test Kitchen of International Smoke...

And this lead to the release of her very own cookbook, The Seasoned Life.

In 2017, Ayesha was named as a spokesperson for CoverGirl...

Which made her the first-ever spokesperson for this brand who isn't a singer or a full-time actress.

Cooking seems to have made a very comfortable career for Ayesha...

As she appeared as one of the new hosts for The Great American Baking Show for a couple of episodes.

As for Ayesha's personal life...

She has been married to NBA player Stephen Curry since 2011, and they have 3 children together.

Ayesha is known for being very honest on social media...

And she often takes to Twitter to voice her opinions on certain subjects, including the pressures of social media and being a mom.

One tweet has surfaced from 2015 that is extremely contradictory to a recent bikini picture that she posted on her Instagram page.

Everyone's into barely wearing clothes these days huh? Not my style. I like to keep the good stuff covered up for the one who matters 😂😂😂
— Ayesha Curry (@Ayesha Curry)1449377559.0

"Everyone's into barely wearing clothes these days huh? Not my style. I like to keep the good stuff covered up for the one who matters," she wrote back in 2015.

Somehow, fans have unearthed this tweet and they've decided to hit back at Ayesha because of her recent post.

Fans have accused her of "bashing other women" and then doing the exact same thing herself.

Many found it patronizing...

Ayesha Curry patronised other women for showing skin to men that aren’t their partner, then cried about not getting… https://t.co/NmJQSVTEGz
— men scare me (@men scare me)1590313361.0

Especially as Ayesha has now posted a picture that she was criticizing a few years ago.

The TV personality has lost a lot of weight over the last few years...

I’m laughing at the fact ayesha curry was really tryna slut shame women for not dressing modestly when she was chub… https://t.co/V7L6n9SWTh
— liya london (@liya london)1590325276.0

And fans believe that her attitude has changed just because she now weighs less.

Many fans accused Ayesha of simply being jealous of others.

Women should be allowed to do what they want and be confident in their own ways, whether that's posing in a bikini or in a sweater.

But some have been defending Ayesha's words.

It's true what this Twitter user has pointed out - we as people do change over the years and it's easy to say that many of us can agree with this.

Many people don't see the offense behind Ayesha's tweet...

And as this Twitter user suggested, why can't people just be happy for her weight loss journey?

And we think she looks absolutely incredible. Well done, Ayesha!