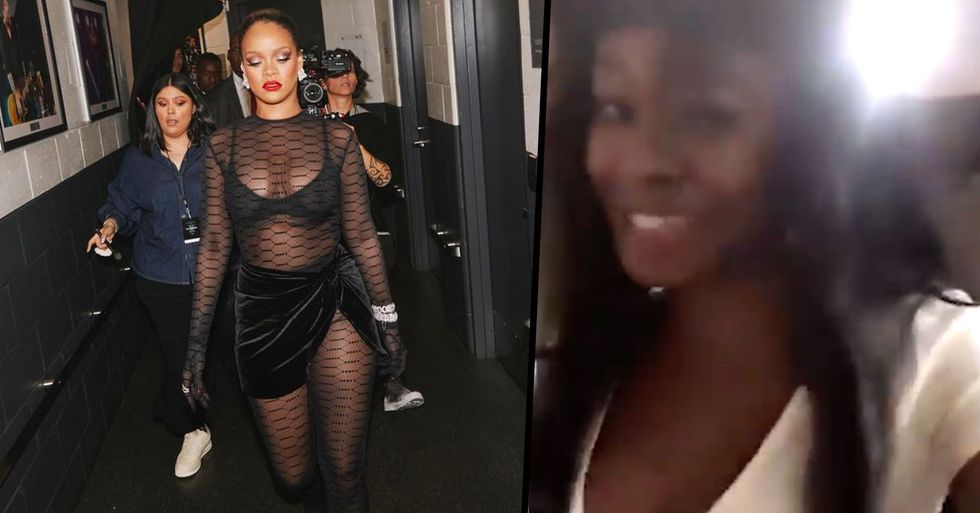 Shaming somebody for their body type is never okay.

So many people, regardless of their gender, suffer from being fat-shamed and are bullied just because of their appearance which ultimately causes depression, anxiety, and a whole load of other mental health problems that can result in ruining lives.

Celebrities make no exception for this, but sadly, there are many famous people out there who use their platforms to belittle others.

Azealia Banks is the most recent to make cruel remarks about somebody's weight, and that person was the one and only Rihanna. Keep scrolling to learn more...

Fat-shaming is sadly a part of our society.

Especially with the help of social media, it seems that we can't go a mere 5 minutes without somebody just having to make cruel remarks about another person's weight.

Especially for those in the public eye...

Any tiny move a famous person makes is often scrutinized, ridiculed, or criticized by the public, by some stretch. And this mostly occurs on social media.

Social media, in particular, Instagram, is the biggest platform for fat-shaming...

Speaking to Fox News, Australian Instagram model, Jem Wolfie, spoke about how not all of her millions of followers are nice. She said that the worst part of her job was "waking up every day and seeing the comments and messages that are really horrible."

Her Instagram is dedicated to her love of fitness and health...

"It can be exhausting to have negativity constantly shoved down your throat every day," she said about the strangers who call her "fat" on a daily basis.

Despite the constant campaigning against body shaming, it still happens.

And Azealia Banks is no stranger to inflicting this kind of unacceptable harassment.

Banks has been a big part of the hip-hop scene for years...

The twenty-eight-year-old rapper, who came from Harlem in New York City, rose to fame by making music through MySpace back in 2008.

Banks is known for her outrageous and unprofessional outbursts...

She is certainly a woman who simply doesn't know how to bite her tongue, and she is often in the limelight for sparking public feuds with anybody who crosses her path.

Who could forget the Aer Lingus incident?

Earlier this year, Banks removed herself from a flight with Irish airline Aer Lingus after calling a flight attendant an "ugly Irish b****" during a heated argument over passport control. According to The Guardian, Banks later went on to apologize to her Irish fans and called herself the "Queen of Ireland."

This isn't the only time Banks has given in to her temper...

In 2017, she accepted a plea deal after an incident in which she bit a New York City bouncer on the breast and spat on her. Also, back in 2015, she was removed from a Delta flight after calling an attendant a “f****** f*ggot," and a year later, she called Zayn Malik a “curry-scented b*tch," and asked for Sarah Palin to be "gangbanged."

Her behavior is completely unacceptable.

While defending herself in excuses for "defending her community," Banks is quite simply a cruel and rude human being who clearly takes pleasure out of belittling others.

Rihanna is Banks' most recent target...

Rihanna has been super busy recently with the launch and promotion of her brand Savage X Fenty, which is a stunning collection of lingerie for all body types.

And as expected, the show was truly incredible. It has so far been praised for its choreography, stage design, and inclusivity.

But of course, Banks had something to say about it.

She posted a series of videos to her Instagram, the first video showing her ranting about a previous feud with Rihanna, in which the Barbadian singer posted a photo of Banks a few years ago talking about how "her edges were missing" (edges meaning the shorter hairs that grow from the edge of the hairline).

She goes on to call out Rihanna for having "bald edges."

"I'm watching this f****** Fenty thing on Amazon and all I could f****** look at is Rihanna's bald ass f****** edges." She goes on to discuss how it has always been a "cultural joke" that her edges were missing, but now its time to laugh at Rihanna.

"I know that coke metabolism is f****** wearing down on ya'll f****** old b******,  ya'll all getting fat! And now you all want to be body positivity?" Her hysterical rant is clearly aimed at Rihanna and her attempts at trying to bring the beauty icon down by fat-shaming her haven't worked, at all.

Fans have been quick to jump to Rihanna's defense.

Many believe that Banks is simply threatened by RiRi's success and that she is, in fact, the one "getting old."

Many have branded Banks a bully.

Azealia Banks calling Rihanna fat, old and ugly has the same bullie energy that my own bullies had, those envious bitches 🤷‍♀️
— arielle (@arielle)1569231850.0

And let's face it, it's true. Her behavior mimics exactly that of a bully by targeting and belittling others who she is, in fact, quite clearly just jealous of.

This isn't the first time that Banks has fat-shamed others.

She publically shamed the Detroit born singer recently on Instagram, saying things such as: "they are literally choosing the worst of the black women's crop to advertise America," and "imagine what the rest of the world thinks when they see Lizzo jumping around in leotards with cellulite... she looks like she is making a fool of her black self for a white American public." Wow...

Banks has a clear envy of other black female artists...

She also said about Lizzo's chart-topping hit "Truth Hurts": "The song is not good, nor is the dumpy fat girl spectacle live set she does." "Saddest bit is that the girl is legit talented and truly only being allowed to shine so long as she allows herself to be this millennial mammy of sorts."

It turns out that a lot of people don't think much of Banks as a musician...

And her disgusting attitude towards other artists, especially successful black women, is not working in her favor at all. Azealia Banks is nothing but a bully and a coward for feeling it is acceptable to fat-shame and pick on other people in such a public manner. To learn more about how Banks went on to shame Lizzo, keep scrolling...