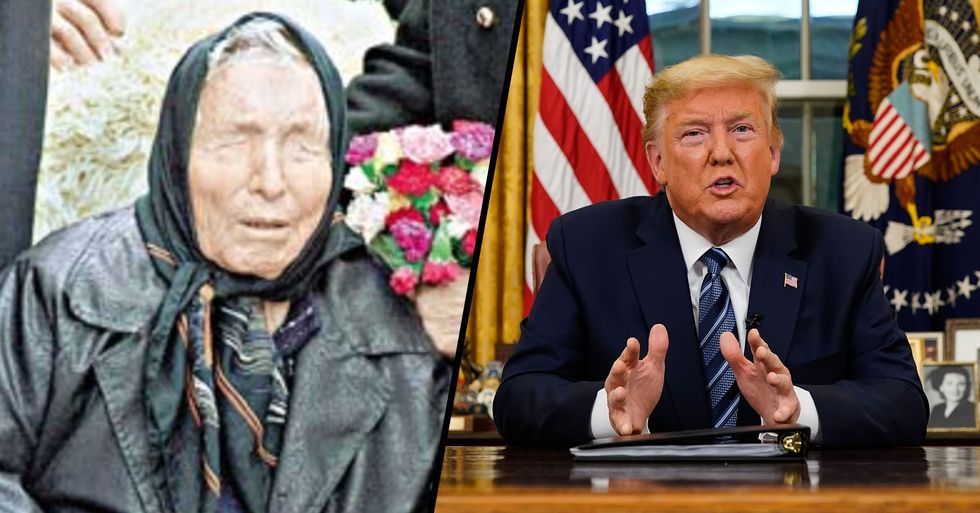 What better way to start our day than to read a bunch of predictions that are set to change all of our lives for the worst?

That's right. Baba Vanga's mystic predictions have made yet another comeback after their accurate streaks in the past. However, her thoughts about 2020 might be the scariest yet because they are already coming true.

Keep reading to find out everything set to happen in the upcoming year, including Donald Trump's bleak future... Prepare yourselves for this one, ladies and gentlemen. It's going to be a rough ride.

This is Baba Vanga.

Vangelia Pandeva Dimitrova born in 1911, was a Bulgarian woman who became famous after having predicted major events throughout the twentieth century.

It all started when she lost her sight...

When she was a teen, Vanga found herself in the midst of a storm in which she suffered major injuries including the loss of her sight.

However, it is said that she still manages to "see..."

The term is used to describe her visions of the future as well as the present. There has been no knowledge that she could see past events.

It is said that she managed to locate her father's sheep despite being able to see.

they should forbid me to see prophecies of nostradamus, baba vanga etc, especially knowing that I am very credulous… https://t.co/WaDePYnuuq
— 💮Gevinu💮 (@💮Gevinu💮)1576908810.0

She knew where they were even though everyone else had gone out to search for them and found no such luck.

From then on, she became known as a healer...

Rather than referring to her as a psycic or a seer, the people of her homeland said that she was a "healer" who helped thousands of people.

So, which predications actually came true?

Vanga died in 1996 at the age of eighty-five, but she left a bunch of predictions that she "saw" were going to come true in this century. This is the point where things get a little creepy so read with caution, guys.

5. The 44th President of the United States.

Vanga predicted that the 44th President of the United States would be an African American man, and she was right because Barack Obama came into power.

However, she mentioned that he would be the last President...

But as we all know, he wasn't. The 45th President of the United States was none other than business tycoon, Donald Trump. But maybe not for long if Baba's other prediction comes true... Keep reading to see what the future has in store for Trump.

4. The Sinking of the Kursk.

She also rightfully predicted the sinking of the Russian submarine, the Kursk.

These are the exact words she said:

“At the turn of the century, in August of 1999 or 2000, Kursk will be covered with water, and the whole world will be weeping over it."

In the 2011 book based on Vanga, called The Weiser Field Guide to the Paranormal, it is written that she warned those around her about the nuclear disaster.

The 2004 Indian Ocean earthquake and tsunami occurred in Indonesia and is said to be one of the worst in history.

The cause behind it was a megathrust under the sea that devasted the country. There was approximately fifteen billion dollars worth of damaged caused by the tsunami.

This one was probably the most famous of her past predictions. Before she died, the "healer" mentioned that this event would shake the world, and it did.

These are the words she had to say:

As well as all this, she also predicted these events...

Stalin's death, the break-up of the Soviet Union and the rise of ISIS. Big yikes.

It doesn't get much more accurate than that, does it?

If you thought that was terrifying, I can assure you, it just gets worse. Her predictions for the future, including the upcoming year, are quite frightening because some of the big ones are on the path to coming true.

Future tellings include these particular topics...

Vanga said that China would become one of the biggest economies and rise to global power. She also added that new technology would be discovered which will revolutionize the human race.

As well as this, we have darker predictions...

And these include Muslim extremists taking over Europe as well as a European collapse after a major change. Keep in mind that the United Kingdom is currently undergoing Brexit, which could be the "change" she is referring to.

Then we also have the demise of Vladimir Putin.

According to Vanga, the current president of Russia is set to have a difficult year in 2020 and it all starts with an assassination attempt. And here's the weirdest part, she said the assassin will be from within the Kremlin itself.

And it seems as if his bestie is in for it too...

She also mentioned that the U.S. President, who we all know is currently Donald Trump, will fall ill with a mysterious illness that will leave him deaf.

And as the coronavirus has now been announced as a global pandemic...

It's hard to decipher if Baba Vanga's prediction is on the verge of coming true. The virus is said to worst affect those who are over the age of sixty and have weak immune systems.

Trump is seventy-three and was seen coughing a few days ago...

And if the coronavirus doesn't get him, apparently he will also be diagnosed with a brain tumor if the mystic’s predictions are correct, suffering symptoms such as nausea and tinnitus.

So, how much of this do we take for factual information?

Well, according to baba-vanga.com, eighty percent of her predictions are correct. However, she has missed on a few occasions... But the downfall of the President seems to be on verge of coming true and it's actually pretty scary...

Let's hope an anti-vaccine is developed before it spreads even more.

And let's also hope the rest of these predictions don't ever come true because God help us if they do! In other Trump-related news, find out why Gordon Ramsey is feeling the heat after refusing to cook for him...