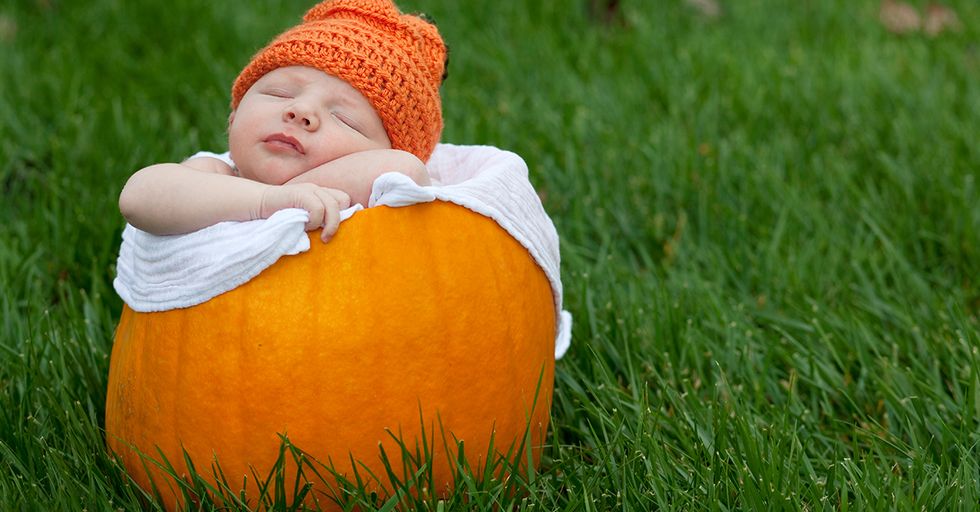 29 Babies in Pumpkins That Are Too Cute for Words

With Halloween mere weeks away, we are already in the belly of fall. I am talking pumpkin spice everything, apples galore, and cooling temperatures.

Candles and blankets and pies, oh my! Fall is upon us, which means we have free rein to immerse ourselves in spooky movies and lots of candy in anticipation for the second greatest holiday of the year (the first, Thanksgiving, comes a month later).

And the Halloween holiday means indulging in a few things. First, chocolate. Second, scary movies. I love a good horror flick this time of year. And last but not least, we have pumpkins. Around Halloween time, one of the best things you can do is run around a pumpkin patch picking out the best specimens for you to carve, paint and decorate. And if you're a new parent, it is almost imperative that you take that small child you just created and stick them in a giant gourd. You just gotta do it. I think it's the law. Anyway, I'm going to share with you some of the best pictures of babies in pumpkins because you deserve it.

Let's listen to Amy Sedaris when she says:

The world may be on fire right now, but this is a list of 29 babies sitting in pumpkins, so at least we have that. At least this much good still exists.

Pumpkin inside a pumpkin

This little one is not only sitting inside a pumpkin, but he is also dressed like a pumpkin! If you look at his face, you'll notice that even he can't believe it.

This baby's like, "Sure, fine mom, I'll sit in the pumpkin, but could you maybe get me a sweater or something. I'm freezing my buns off!"

This little girl is in her happy place, bundled inside this pumpkin. Seriously, don't wake her. She'll throw a fit.

James is a little apprehensive about being in the pumpkin, but he'll do anything to make his parents happy. For now.

Look at this kid! What a ham! Erm, I mean, pumpkin. This kid was born to sit in a pumpkin. He's a total natural!

I mean, it's written right there on her shirt, and the shirt doesn't lie. I love it when they cut holes in the pumpkin, and then their little legs stick out! It's too much.

Sure, they might be a little confused about what is going on right now, but if they have each other, they'll be OK in the end.

Honestly, this would probably be my reaction if my mom dragged me naked out into the yard and stuck me in a giant squash.

Two peas in a pumpkin

There's something a little icky about being stuck in a big pumpkin, and these little babies are not really able to hide their disgust.

Have you ever seen a more relaxed, self-assured baby in your life? This kid's got it made.

I seriously cannot get enough of that tiny little witch hat. It's so great that her parents are starting her early. This kid's going to live up to her greatest witchy potential.

That is one giant pumpkin to be able to hold two adorable little girls! This family really went all out with the gourds this year.

Munch on that pumpkin, baby! I'm surprised more babies don't immediately go to eat the pumpkin they are dropped into. I like this kid's instincts.

This kid is shocked and confused at what is happening. What? Who? How? Dad's just taking pictures? But why?

I love little baby Bella's matching hat! She also knows that the best way to evaluate what you're sitting in is to take a big bite of it.

This baby seriously looks like a model. Those eyes! Those cheeks! Those ears! I can't get enough of it.

Three of a kind

These triplets may be genetically similar, but they all have very different reactions to being placed inside pumpkins.

OK, this looks like a professional photo shoot. The colors are on point, the baby is posing perfectly, and that may be the most perfect pumpkin I've ever seen.

Two months old and already this kid is like, "Yeah, fine, go ahead. Take pictures of me in this pumpkin. I don't care."

Not only is this kid in a pumpkin, but he's actually in a jack-o'-lantern, which is even spookier and more Halloween-y.

The look on this kid's face says, "You took off all my clothes but then put this winter hat on me. Does that make sense to you? Because it doesn't make sense to me."

Oh my goodness that pumpkin is a little too small for that kid! How did they even get him in there? Did they put him in there when he was little and left him until he grew to that size?

Oh, wow. This picture makes me want to curl up inside a pumpkin and fall asleep. This little baby makes pumpkins look so cozy!

The orange stripe, the pumpkin beret, and the look on his face are officially declared Too Much for Me to Handle. Good day.

This is a future Wednesday Addams right here, I can tell! She already loves pumpkins and all things Halloween. A kid after my own heart.

This is such a teeny tiny baby who looks like he's got a lot of wisdom behind those young eyes. He realizes exactly how ridiculous this whole thing is.

OK, this isn't a human baby but I couldn't resist because look at the face on that poor cat! Share this with anyone to make them smile!