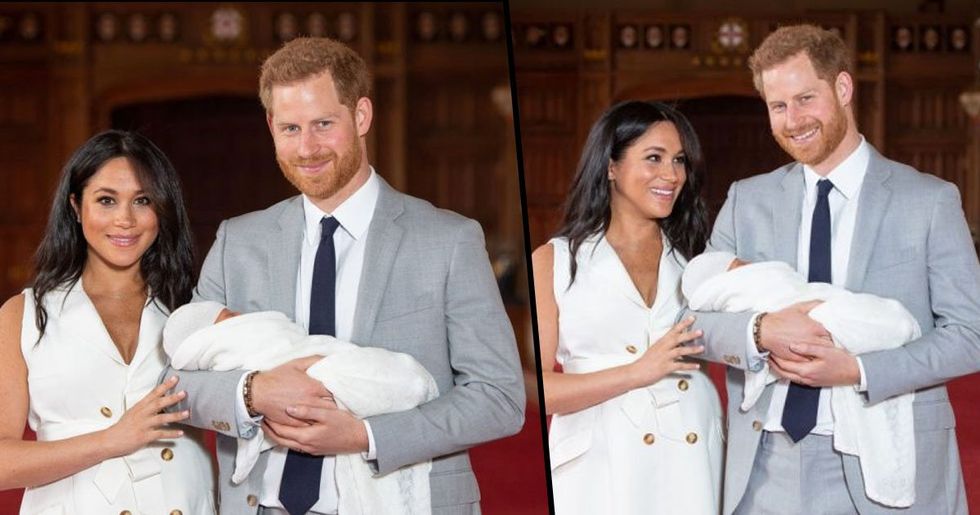 Ever since Meghan Markle and Prince Harry's bouncing bundle of joy came into the world, the question on everyone's lips has been this: who does he look like?

The British Royal family aren't exactly known for their dashing looks. Given that Harry inherited half of his genes from Lady Di, himself and William are alright looking, aren't they? Then again, as the years go by, the brothers are beginning to resemble their father more and more...

Meghan, a Hollywood actress, has certainly brought strong genes to the table. Saying that, have you seen her dad? If baby Archie ends up looking like Thomas Markle, it'll be a real shame. News this week, though, is that the toddler has inherited his father's ginger locks!

Whatever the future holds for baby Archie remains a mystery, but, from all the trouble that Meghan and Harry have been getting themselves into recently, it's clear that this family unit won't be playing by anyone else's rules.

Continue scrolling to get your latest Meghan and Harry fix, along with those cute baby Archie pics!

With the return of Suits, the show that made Meghan Markle a household name, her on-screen husband returned to the limelight and teased that the Dutchess was doing good.

Back in the day, Meghan played Rachel Zane.

Markle left the legal drama a month before marrying Prince Harry. Although there have been rumors that she would return for a cameo in the last season, it's unlikely that she will.

Taking to Twitter after watching the reference to the Duchess' new life in episode five of the new season, fans were rooting for Meghan and her fairytale ending.

We were all wondering whether Meghan has been keeping up with the series.

It's hard to say. There are so many restrictions put on Meghan now that she's in the royal fold that I wouldn't be surprised if they didn't even let her have a Netflix account.

If it all goes belly-up with Harry, there's always a place for her in Suits.

If they were to do another series of Suits, Meghan Markle's character could come back if the Duchess wanted to. Her character, Rachel, did not meet an untimely end when she left the show in April of 2018. Markle and co-star, Patrick J. Adams, who played her husband, Mike Ross, decided to move on and take jobs elsewhere. So you never know... Maybe the show will return after a long-hiatus when Archie's off at some boarding school!

Her days as an actress seem like a lifetime ago, as Meghan has thoroughly cemented herself within the British Royal family. Married life seems to suit her very well indeed.

The royal couple have just returned from Ibiza.

Along with baby Archie, the pair reportedly went away on a private vacation to celebrate Meghan's thirty-eighth birthday.

Staying in a private villa on the island.

The six-day break allowed the royal couple some time away from the media, with no cameras permitted anywhere near them.

Meghan is a fan of the Mediterranean island.

This isn't the first time that Meghan has chosen Ibiza for a vacation. She was there only two years ago with celebrity friends, including fashion designer, Misha Nonoo.

There has been controversy over the couple's trip.

The British tabloid press has been in uproar this week over the prince and duchesses' trip. Claims have been made that they traveled in a private jet that cost the taxpayer £20,000. And you know how the British feel about the royals spending the taxpayer's money!

This comes a week after Prince Harry was criticized for staying on a superyacht.

Attending the Google Camp conference concerning climate change, the prince gave an impassioned speech about our environmental footprints. This came across as pretty hypocritical seeing as, whilst spending five days at the Google "green" summit in Italy, the prince was aboard a superyacht. These superyachts are famously horrific for the environment, as they guzzle 200 gallons of fuel and produce 3.3 tonnes of carbon dioxide every hour.

But they'll only have two kids!

Harry and Meghan Markle have been very vocal about only having two children in a bid to lower their carbon footprint.

Not to stir anything between Harry and his older brother...

Tensions between Harry's camp and William's has been talked about all summer. The assertions made by Meghan and Harry about how they don't believe in having more than two children is a bit awkward considering that his older brother has plenty of kids.

How big is the William and Kate brood now?

Honestly, it feels as though they only got married two minutes ago, but, in actuality, that Royal wedding was over eight years ago now. Since then, Will and Kate have gone on to have three children. Will there be any more on the way? Who knows? These two haven't said anything about keeping things small.

Harry and Meghan are doing it their way.

Reports of the pair not sticking to tradition pour in every week into the British press, with the latest goss being that Meghan and Harry refuse to follow traditional protocol and always sit next to each other at dinner. Personally, I think that's kind of cute and I certainly don't blame Meghan for not wanting to spend all evening sitting next to some old posh British diplomats making small talk about the mushroom soup...

At the London premiere of The Lion King, Beyonce and Jay-Z met Meghan and Harry. Reports said that Beyonce addressed Markle as "my princess." So, even if the British public are grumbling about the American invasion into their royal family, Beyonce likes Meghan - and, really, it's what Beyonce thinks that's really important.

Harry makes no secret about how much he is besotted with his wife. Posting on their joint Instagram account this week in celebration of her birthday, the prince wrote: "Happy Birthday to my amazing wife. Thank you for joining me on this adventure - Love, H". *crying emoji* You guys...

It doesn't matter how much Prince Harry loves his wife, though - wearing jeans to Wimbledon is apparently a total no-go. Meghan discovered that she had committed this faux-pas only after she was not permitted into the royal box during Wimbledon this year because she wore jeans.

Meghan returned to Wimbledon a few days later with her sister-in-law, Kate, in tow. This time, she was more than welcome in the royal box, given that she was wearing a skirt... Honestly...

Meghan is a force for change.

Nevermind dressing down for Wimbledon, Meghan is surely the first Royal to guest-edit for Vogue.

Meghan is a force to be reckoned with.

Make no mistake, Meghan Markle has a strong head on her shoulders. Not only did she help to curate the September issue of Vogue to include "a diverse selection of women from all walks of life, each driving impact and raising the bar for equality, kindness, justice and open-mindedness," but the Duchess has also announced that she is starting her own fashion brand, with proceeds going to help important women's charities such as, "Smart Works, a charity that provides clothing and coaching to unemployed women looking for a job."

Thanks so much to Alice Williams and the awesome team at @LuminaryBakery in London for letting us join them last we… https://t.co/G5rKH0ruSx
— Omid Scobie (@Omid Scobie)1565391545.0

Could this be a joke about her carrot-topped husband and son?

Here, we see Harry as a toddler, playing with his late mother. Diana was naturally blonde, so he certainly did not inherit his ginger mop from her.

Unlike his older brother, William, who had noticeable Charles-features growing up, Harry was always a bit of a black sheep, not resembling Charles much at all.

It's no secret that Lady Di had a relationship with British Cavalry Officer (and general posh boy), James Hewitt, during the 1990s. With Harry's ginger hair matching that of Hewitt's, there has been speculation in the past that it was, in fact, he who fathered Harry.

Rumors of Harry's illegitimacy were put to bed long ago. I mean, have you seen how uncanny his resemblance to his grandfather, Prince Phillip, is? The latest scandal to hit the Royal family is the goings-on with Prince Andrew (Harry's uncle), who, in case you hadn't heard... was very good friends with the late Jeffrey Epstein.

Prince Andrew was known to have attended Epstein's "parties."

Not only was Prince Andrew friends with the convicted billionaire pedophile, he has been accused of having sexual relations with Epstein's teenage sex slave, Virginia Roberts, when she was only seventeen.

Which has led people to question why it's Meghan that always gets the bad press...

Oh heaven forbid Meghan should wear jeans to Wimbledon - but it's alright for Prince Andrew to get Jeffrey Epstein to lend him $15,000 to cover his gambling debts...

Meghan is a saving grace for the Royal Family.

Frankly, rather than giving the Royal family a bad name, I'd say that all of Meghan's efforts to pull the monarchy into the twenty-first century is doing them the world of good.

If baby Archie is going to take after Prince Harry in looks...

Hopefully, he will take after his mother, Meghan, in brains and ambition.