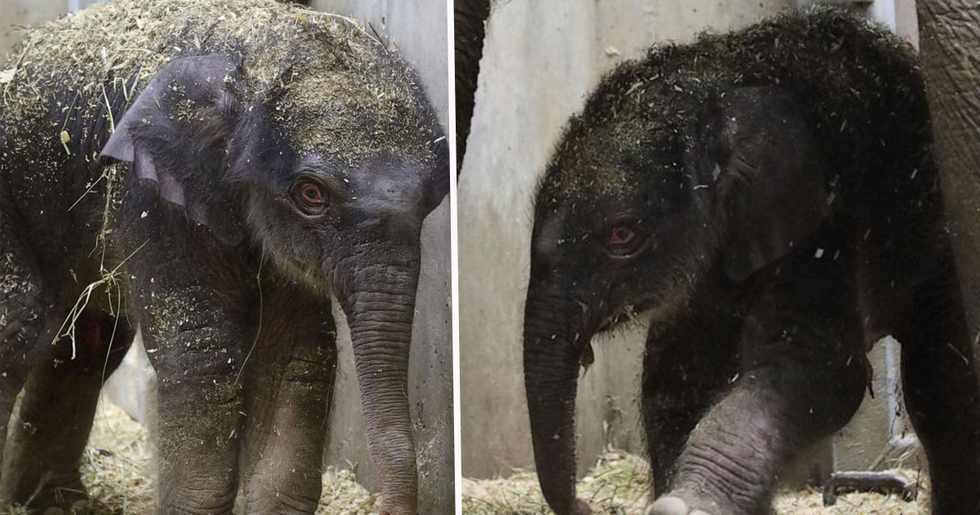 Asian elephants are a greatly respected species in Asian continents, and people will go to extreme lengths to save these majestic creatures. But sometimes, there's only so much one can do before it's too late.

The Asian elephant is a majestic species.

With it being the largest mammal on the Asian continent, this species of elephant is greatly respected in cultures all around Asia.

They are extremely sociable animals...

The Asian elephant is usually spotted in groups of around 6 or 7 females, and they are known to join other groups of elephants to form a larger group.

And they are very much loved and respected across the Asian continents.

They symbolize wisdom and royal power...

And many religious groups worship these beautiful animals.

These elephants are that loved, in fact, that they are celebrated every year...

The Elephant Festival in India is celebrated every year in Jaipur, and it focuses solely on the Asian elephant and its contributions to Indian culture. It attracts thousands of guests and it is very much a big part of Indian culture.

But the festival has caused controversy in the past...

The Elephant Festival isn't the only celebration to use the animals, however...

The Temple of the Tooth, Buddhism's holiest shrine in Sri Lanka, holds the annual festival with traditional drummers and dancers as well as nearly 100 tamed Asian elephants.

The elephants involved in the festival are trained and come from sanctuaries...

But this sadly doesn't apply to all elephants...

Save Elephant Foundation is a foundation that is dedicated to protecting Asian elephants all across the continent.

They promote the humane treatment of elephants and all wildlife...

They encourage the kind and respectful treatment of all elephants...

The foundation gives tourists and guests the opportunity to visit and meet the elephants that are under their care, which involves bathing, stroking, and feeding the animals, rather than riding them.

But in some cases, some of the elephants cannot be saved.

Last Sunday, an Asian elephant named Avi tragically passed away after being euthanized by the veterinary team at St. Louis Zoo.

Avi was only born twenty-seven days prior to his death.

The calf had developmental issues that limited his ability to feed properly. His condition continued to worsen as more and more days passed.

The zoo released a statement in which they explained their decision:

"Everyone here is just devastated right now. Our team of professional elephant care experts did everything possible to help improve the calf's health. Unfortunately, in the end, it just wasn't enough as his health complications were too severe." The zoo also emphasized that he "passed away peacefully."

"The animal care team who worked so closely with this calf every day of his short life, and all those who loved him, are understandably grieving. "Avi will be missed, but never forgotten."

Avi has been near his mother Rani since the day he was born.

But after weeks on life-saving measures implemented to try and save his life, his condition deteriorated severely over the weekend.

The veterinary team is said to be carrying out a necropsy, but the results will take weeks.

@FrankMurtaugh Even though it’s been years, I still feel a lump in my throat when I think about the baby elephant t… https://t.co/qTVZeyfTMo
— Monique (@Monique)1596424465.0

Even though the baby elephant was only alive for 3 and a half weeks before his death, the zoo had been prepping for his arrival for 3 years due to a long-term project they had been conducting.

There are less than 3,500 Asian elephants left in the wild due to poaching.

They are murdered for their tusks as well as general trophy hunting and standard elephant pregnancies take twenty-two months to complete, so the rate they are born is much slower than other species.

Raja was the first Asian elephant to be born in the zoo. According to CNN, their breeding was part of the Association of Zoos and Aquariums Asian Elephant Species Survival Plan which is "a national cooperative breeding and management program responsible for maintaining a genetically healthy population of Asian elephants in North American zoos."

We're sad to hear the news about Avi, but we hope he's at peace now.

For more elephant-related news, keep scrolling. This is an important reason you should not be wanting to ride elephants in Thailand...