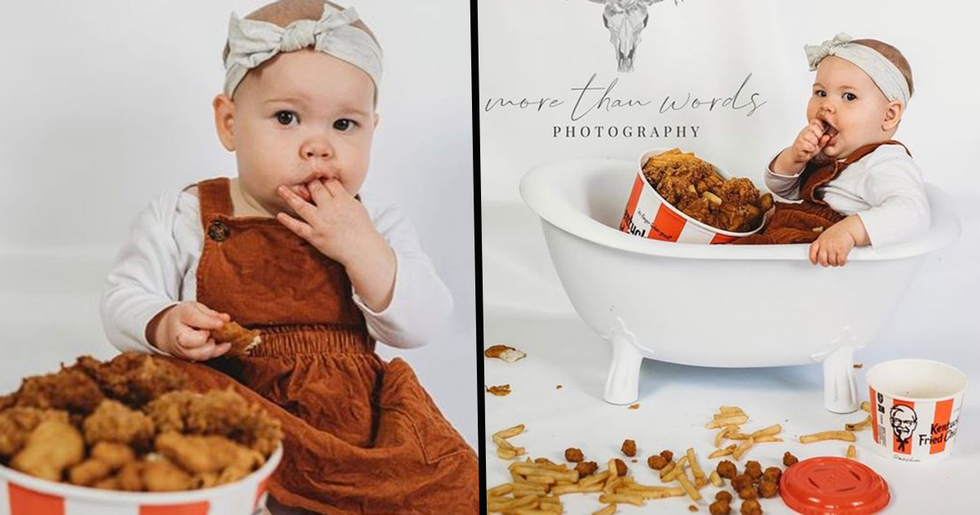 A mom has been left disgusted after a lighthearted and fun birthday photoshoot quickly turned sour when comments began flooding in fat-shaming her one-year-old daughter.

The comments are horrific. Keep scrolling to see for yourself...

Kayla Frizzell is one of thousands of KFC fans.

The mom of 2 from Australia can't get enough of the infamous fried chicken and is even considering having a KFC themed wedding next year.

But, despite her love for the fast-food chain...

She doesn't usually allow her children to eat it.

However, in celebration of her daughter's first birthday...

She thought it would be funny to combine her love of KFC with her baby girl, Mia.

So, Kayla, who is also a photographer, set up a photoshoot for the tot.

It's a common trend for children to have "cake smash" photoshoots, but Kayla opted for something a little different.

Instead of smashing a cake, Kayla photographed her daughter with a bucket of chicken.

The pictures are adorable! Keep scrolling to take a look.

But sadly, the pictures received a lot of backlash.

And many of the comments were fat-shaming the one-year-old.

Yep, you read that correctly...

Kayla was utterly shocked at the comments she received under what was intended to be a fun, lighthearted post.

"No wonder this baby is fat, KFC should not be given to one-year-olds," wrote one troll.

Some people went even further with their cruel comments.

One person said they'd be reporting Kayla to child services over the pictures. What. The. Hell?

Understandably, Kayla was disgusted by the backlash.

"I was so angry about the fat labelling," she revealed to Kidspot.com.au.

"She's an innocent one-year-old child. I don't care about them pointing out KFC's not healthy... but don't call her fat because I let her suck on a chicken bone one time."

Kayla went on to say that Mia has a well-balanced diet, as well as still being breastfed.

The tot ate a few chips, but had been fed before the photoshop, Kayla explained. She and her partner ate the chicken, then gave Mia the bone to hold while they took pictures.

"We already live in a judgemental society."

"...where we grow up and it's normally teenagers feeling the pressure to be a size 10 or to fit into this, or be Instagram-worthy... but to shame a one-year-old or to shame the mother who's doing her absolute best to share a fun, creative Facebook shoot in isolation times?"

"There's just no need for negativity."

The fact that these people are targetting a one-year-old child is utterly horrific.

But people don't seem to kick up a fuss about them? Mia is utterly adorable. Shame on anyone who thinks it's okay to fat-shame a one-year-old. Want more like this? Keep scrolling to see the moment a girl fat-shamed a guy at McDonald's before receiving instant karma by a bystander...