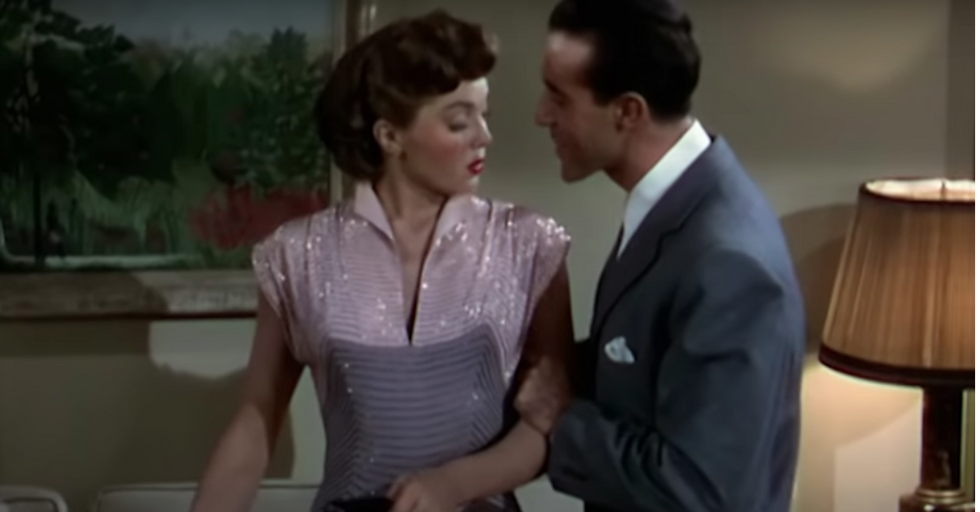 Is 'Baby, It's Cold Outside' a Rape Anthem or a Feminist Anthem?

The days are getting shorter, the weather is getting colder, and a surplus of cheesy holiday movies with ridiculous storylines are upon us. It's Christmastime, and it's the best time of year. Don't try me, I will argue that Christmas rules above every other holiday for as long as I shall live.

Besides the blatant excuse to eat like a gluttonous monster, one of the best parts about the holidays is the music. Sure, blaring "All I Want For Christmas Is You" the second the clocks strikes midnight on November 1st can seem like overkill, but us Christmas folk know that's perfectly acceptable.

Christmas music is all of the things - cringeworthy, bop-worthy, and stream 24/7-worthy. It spreads holiday cheer like those strange CGI elves in that new The Christmas Chronicles movie. Side-note: everyone watch that movie on Netflix right now, because it features Kurt Russell as a hot Santa and there's nothing more you could possibly want.

But anyway, let's move on.

When you think of Christmas music, there are usually a few adjectives that come to mind.

Cheerful, cheesy and bright are some of them. Catchy and ridiculously annoying also fall into the Christmas music category.

And then there is one song that is so polarizing that some radio stations have decided to ban it.

Can you guess which Christmas tune has seemed to age absolutely horribly? A song that has been dissected and inspected and written about?

You can probably guess that the song is, "Baby, It's Cold Outside." Most of us grew up with this song blasting through the speakers of our car or our home and didn't blink an eye. Mostly, we were too young to understand the lyrics and instead nodded our heads along to the catchy melody.

"Baby, It's Cold Outside" was written in 1944 by songwriter Frank Loesser.

It appeared in the 1949 film, Neptune's Daughter, and even won an Oscar for best original song. It's a duet between a man and a woman, where the woman sings about how she "really can't stay" and asks, "what's in this drink?"

In recent years, these lyrics have raised some suspicious eyebrows.

Which is to be expected, with lyrics like, "I ought to say no, no, no sir" followed by the man crooning, "mind if I move in closer?"

There are people who believe that the song is a sexist, dangerous piece of music that insinuates that the man in the song is intending to force himself on the woman.

This holiday season, there are even radio stations banning the song from being played. Cleveland's WDOK is one of those stations.

Host Glenn Anderson wrote a statement on the station's website.

"Now, I do realize that when the song was written in 1944, it was a different time, but now while reading it, it seems very manipulative and wrong.  The world we live in is extra sensitive now, and people get easily offended, but in a world where #MeToo has finally given women the voice they deserve, the song has no place," Anderson wrote.

Anderson is not the only person in the radio industry to ban the song.

But despite the good intentions of the ban, the radio stations are receiving a large amount of backlash.

Figula told NPR that he received hundreds of emails demanding that the song be placed back in the radio's rotation. This number was more than the amount of people who asked him to remove the song.

There are people who take their Christmas tunes very seriously.

Figula said, "People are unbelievably passionate about their Christmas music, it's the one thing that you can't mess with." He explained that people depend on the music to "reminisce to the good old days when life was easy and simple."

The song has become an intensely complicated issue, and some radio stations have even back-tracked on their ban.

Denver's KOSI banned the song, then decided to poll listeners to see what they thought. The results showed that the overwhelming majority of the 15,000 participants wanted the song back on the radio.

Program director Jim Lawson released a statement about the decision to put the song back in rotation.

"While we are sensitive to those who may be upset by some of the lyrics, the majority of our listeners have expressed their interpretation of the song to be non-offensive," Lawson said.

To say that people are on opposite ends of the spectrum when it comes to this song is an understatement.

In 2016, a feminist rebuttal was posted on Tumblr by a self-proclaimed "former English nerd/teacher." The writer makes the argument that in the historical context of the song, the lyrics do not paint a disturbing picture. The argument the writer makes is that it's actually the opposite.

The author of the post insists that we need to "look closer" in order to break down the song.

"'Hey what’s in this drink' was a stock joke at the time, and the punchline was invariably that there’s actually pretty much nothing in the drink, not even a significant amount of alcohol," the writer claims.

The writer explains that a woman staying late (and alone) at a man's house in the '40s was considered totally taboo by society.

"See, this woman is staying late, unchaperoned, at a dude’s house. In the 1940s, that’s the kind of thing Good Girls aren’t supposed to do — and she wants people to think she’s a good girl," the author writes. "But she’s having a really good time," the author continues. "and she wants to stay, and so she is excusing her uncharacteristically bold behavior (either to the guy or to herself) by blaming it on the drink — unaware that the drink is actually really weak, maybe not even alcoholic at all."

The author continues to analyze the "what's in this drink?" line.

"It’s a joke about how she’s perfectly sober and about to have awesome consensual sex and use the drink for plausible deniability because she’s living in a society where women aren’t supposed to have sexual agency," the author claims.

The author claims that the song only makes sense in the context of the time period.

"Basically, the song only makes sense in the context of a society in which women are expected to reject men’s advances whether they actually want to or not, and therefore it’s normal and expected for a lady’s gentleman companion to pressure her despite her protests, because he knows she would have to say that whether or not she meant it, and if she really wants to stay she won’t be able to justify doing so unless he offers her an excuse other than 'I’m staying because I want to,'" the author explains.

You can read the tumblr post in its entirety here.

The song has, predictably, been the subject of many tweets.

This little boy points out the obvious. Just give the dang woman a ride home.

Some people point out the issues with other Christmas songs.

Which leads into another discussion of how most Christmas songs are actually weird when you think about the lyrics. "Santa Baby" is pretty gross and uncomfortable.

There's also been rebuttals to the controversial song in the form of art.

For instance, there's a not-creepy version of "Baby, It's Cold Outside" that could easily take its place. In the song, the dude is super supportive of the woman deciding to leave. It's the 2018 version of a 1944 song.

Some people just keep their criticism straight and simple.

It's a creepy song and that's the end of that. But no matter how you feel about the tune, it's hard to deny the complications of it.

And the question that begs to be answered...

Is it a bad song? Is it okay to listen to? There's no clear and cut answer to this, unfortunately.

One could also point out that LOTS of the things from the '40s are awful.

Movies were chock full of racism, sexism, bigotry– the list could go on and on. "Baby, It's Cold Outside" is certainly not the first piece of pop culture to age horribly.

The song also brings up that mindlessly consuming things can be a bit dangerous.

Didn’t really get the whole baby it’s cold outside being banned so I looked up the lyrics and now I can confirm tha… https://t.co/iAN06webiN
— Dustin Massier (@Dustin Massier)1544123175.0

How many of us blindly sing along to songs without really understanding the words we're saying?

No matter what, it doesn't hurt to take a moment and think about the things we're listening to or watching or reading.

It's 2018, and times are obviously different than they were in the '40s. But does that mean we should excuse a song with potentially dangerous implications? Or is it a harmless tune that's simply "of the time?"

Either way, it's a song that has some heavy baggage.

And while some radio stations may stop playing it, others will continue to do so.

You should never feel pressured to enjoy something just because others do.

Christmas music has given us plenty of gems and treasures to enjoy without creepy subtext. Just throw on Mariah Carey's Christmas album and push that repeat button.

The conflicting arguments surrounding the song aren't going to end.

But the rebuttals and the complicated conversations that come from talking about the issues with the song can foster important discussions.

But at the end of the day, the song can be highly triggering for people.

It's a relic, and some things are just better left in the past. Share this article with your friend who can't get enough of Christmas music.