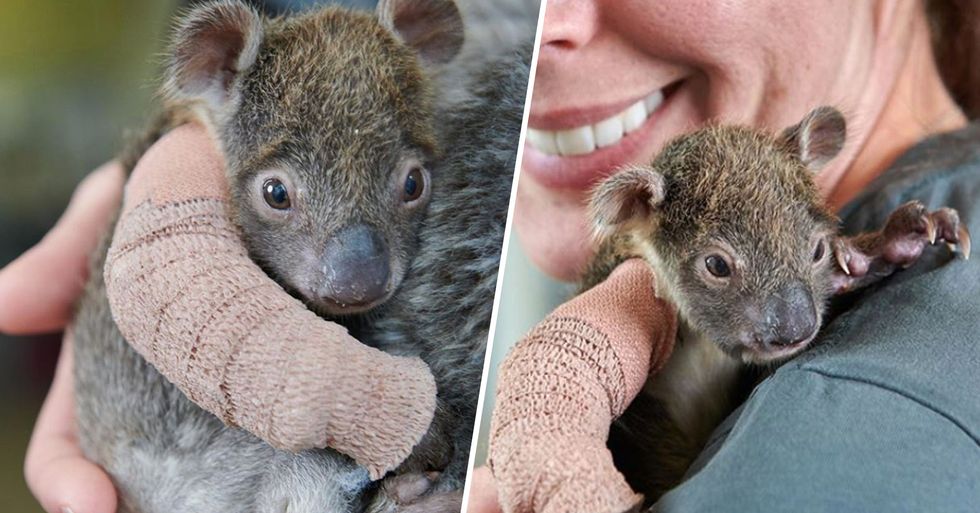 Well, there's something that makes them even cuter, animals with casts.

Keep scrolling for the baby koala that has a mini cast for a broken arm...

A cast for animals almost doesn't sound possible, does it?

It's just a medical treatment that we associate with humans.

It's actually pretty common for them if they have a broken bone.

After all, accidents aren't just for humans!

Animals have them too. And animals even manage to look pretty cute in their casts.

Look at this little one cling to the towel. My heart!

I didn't know rabbits had such long legs!

And then, of course, the one that will make us all melt.

This baby owl is really working that bright lavender color.

This little guy fell out of a tree and broke his leg. Aw!

Triple casts on a hedgehog? There's something I never thought I'd see.

We didn't think this one would be possible, an Echidna.

His little feet casts are so adorable! Yellow is always a good option.

Dogs with casts seem to be common!

How does a turtle do that?

The green really compliments the shell.

This baby goat really wanted to go back to running, hence why he's got lightning bolts on his casts.

Next a tiny hamster.

This baby hamster broke his arm very early on too, so had to keep his hand in a cast for weeks. Look how adorable he is!

And finally, the most recent animals in casts picture to go viral.

Is this tiny Koala.

This baby broke her arm after allegedly falling out of a tree at a logging plantation in Victoria, Australia.

Unfortunately, the baby's mother had much worse injuries and had to be put to sleep. But this little joey was very lucky to have survived the fall.

Especially, as she is believed to be only around 150 days old

Thankfully, she was taken to the Weribee Open Range Zoo to be looked after, where her damaged arm is healing well.

She was really fortunate to have just a broken arm.

VT reported that veterinary nurse, Jess Rice, said: "It was really touch-and-go when she was brought to us. She was just at the stage where she would have been starting to poke her head out of mum’s pouch. Joeys that size don’t have a good survival rate in care."

Well, we hope that all these little guys have a speedy recovery!