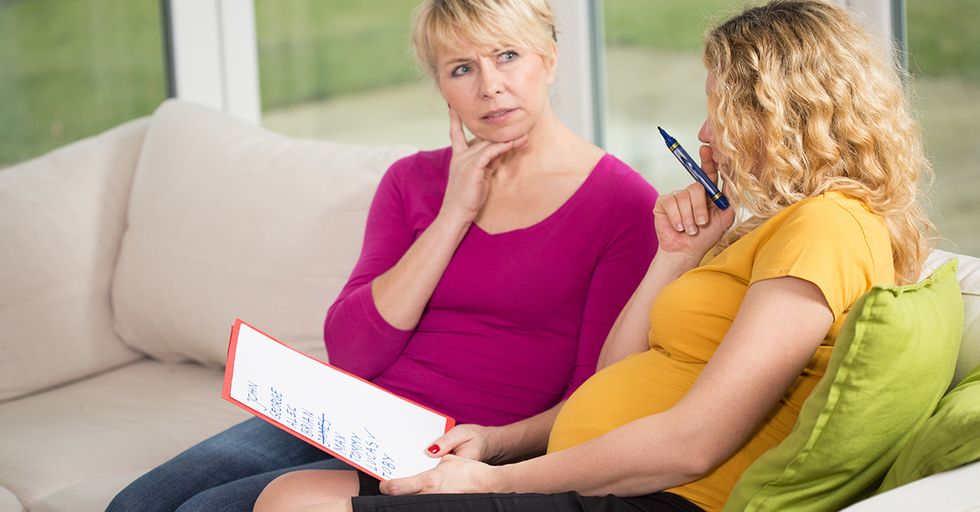 When you are expecting, it's common for people to ask if you have any baby names picked out. I was always excited to share the names my husband and I agreed upon for our child-to-be. But some couples keep it private and say they want it to be a "surprise."

I think those who say they are keeping it a surprise are very wise because once you do start telling others the name of your future baby, damn near everyone will have an opinion.

That includes your family, his family, and everyone in between. So, be prepared. And don't be surprised if you are hurt by some of the comments you receive. The hurt mostly comes from family members who openly say the name that you picked is ugly, horrendous, or just not very pretty.

When you are pregnant your hormones are more engaged, and when someone makes remarks about what you will be naming your child, your inner mama bear will emerge. And if she doesn't, then you will surely be super offended. And will probably cry.

Names are a unique thing. A name is something you carry with you your whole life.

Parents usually have 9 months to prepare for the birth of their child. And that means you have a lot of time to pick and agree on a name.

Some couples have a hard time agreeing on a name altogether. And may enlist the help from family and friends for an added opinion.

But this is a slippery slope. You see, everyone has an opinion. And most aren't scared to share it.

In fact, in my experience, my mom and mother-in-law were the most outspoken with regard to the names we had picked.

My mom liked the name we chose for our first-born. After all, the middle name was Stephania – which was her mother's middle name.

My MIL didn't seem too fond of it. She actually suggested we name our baby girl Toni or London.

While I didn't hate those names, they certainly didn't resonate with me. And a couple of years later, she ended getting a dog and naming her Toni.

Family members are usually the most outspoken and for whatever reason, think they have a say in what you name your baby.

They don't. Because it is your child. You and your significant other are the ones to call this child by her name every single day. You have to like it and it needs to feel right. End of story.

But if you have an ax to grind with someone (maybe your MIL) then you might want to choose a name that you just know she'll hate.

Or at least cringe every time she says it. I suppose it depends on the relationship you have. The same holds true for your mom.

Often times we like a name but it reminds us of someone we didn't like very much.

And when this happens, no matter how much you like the name, you usually end up going with something else.

Let's take a look at some names that will make certain family members, ahem, cringe inside.

Millennial parents don't mind pushing the envelope. And odd names are the norm with these parents. Apparently, animal-based names are making their mark.

Famous Actress, Alicia Silverstone named her son Bear years ago. I remember thinking it was a very interesting and weird name for a child. But I guess this celeb was just starting a bit ahead of the time. She gave birth to Bear in 2011.

Fox and Falcon I suppose are sort of cool. And they are also gender neutral.

I highly doubt your in-laws would approve of these names. Especially since names like Linda and Gary were more popular in their time. Think you might have trouble suggesting a forest animal as a good name for their unborn grandchild.

Another popular trend is the names ending in double consonants.

Think Scarlett and Beckett. You might not have any issue with these. After all, Scarlett is a pretty little girl's name.

Turning nouns into everyday names is also a new thing.

Nouns like Famous, Happy, Clever, and Success are making the list. Even if you're MIL says she dislikes Happy, surely she'll smile every time she says it.

Hunger Games was a huge blockbuster hit. Suppose it's not surprising that the main character's name is gaining momentum.

Katniss that is. Jennifer Lawrence was definitely badass in this movie. If your in-laws have never seen the movie, you may want to have a viewing party. And they can call your baby girl, Kat for short.

Jax is a popular trending name for boys.

The name is derived from John. And unlike John, Jax has no biblical ties. But as they say, never talk about religion and politics.

Everyone is on social media these days.

And believe it or not, the name Hashtag actually belongs to someone. According to People, a baby girl was named this back in 2012. Better hope your #in-laws know what a #hashtag is.

But why stop with just Hashtag when you can full on name your kid, Twitter!

And not your traditional Sam or Pat. No, millennial parents are going with names like Justice. After all, this generation is all about social change. I can't help but think of the store Justice just a bit when I say this name.

Acronyms for baby names? WTH not?

Hey, it could be worse. Just ensure your family all understands what ILY stand for. I LOVE YOU! And think how easy it will be for your child to learn and write their name one day?!

The millennials also like to shake up the spelling of names.

We all know of a Jessica, don't we? And this is why millennial parents have decided to keep the name but change the spelling. Back in the day, Jessica would fly. But now, you will see Jessyca more often than not.

As moms, we like to pop bottles of wine, don't we?

At least that's the stereotype. According to the Social Security Administration, wine names are popping up more and more. Names like Shiraz and Syrah are a thing, guys! Maybe you should know what your MIL's fave glass of vino is before you break the news.

Don't you dare think millennials are the first to come up with weird monikers.

Nah, odd baby names have been around for hundreds of years. Let's take a look at some from the last century for an even comparison.

We know it is common to name your kid after your favorite actor or actress.

And some parents even name their kids after their favorite authors, but back in the '30s, it was common for parents to name their children simply after a profession: Author, Judge, Doorman, etc.

In the year 1954, two children shared the same ridiculous name.

Window. That's right, Window! And one of these two poor children had the middle name, "coverings." Makes you wonder if her parents hated her? So, use this as an example when mentioning your chosen name to your in-laws.

In the 1970s, it was known that people liked to party.

Woodstock comes to mind whenever I think of the '70s. Also, pot, weed, Mary Jane, etc. Marijuana was a given name to a child in the '70's. Poor thing. At least her name is still a popular drug.

We all know our alphabet, don't we?

Some parents in the '90s must've loved it so much, because 300 children have the name, Abcde. It stops at E. Not. Even. Kidding! I would be so pissed if this were my name. This serves as a good reminder to your in-laws that it could be so much worse.

Why not reverse it?!

Hey, if you have a family name, James, for example, but you are so sick of the tradition... then go for Semaj. This is James in reverse. Another popular one is Nevaeh. Then, no one can argue with you for not following tradition... sort of.

At the end of the day (don't you just love that phrase), you and your partner have to live with the name.

Which means despite what anyone else says, you have the final say in what you will name your child.

You will be the ones calling your child's name on a daily basis.

It has to resonate with you. So suck it up and put on your big girl panties. But, let your hubby break the baby name news.

Truth be told, you will piss your in-laws off at some point in time.

This, I will tell you, is inevitable. Just like they will piss you off as well. And having an opinion on what their grandchild's name will be is just the beginning.

Once your baby arrives, they will give you all sort of advice.

Some good, some bad. Just remember to smile and nod. And say STFU – whether out loud or in your head. Chances are, they won't understand or care what you said anyway – once they hold that sweet baby.